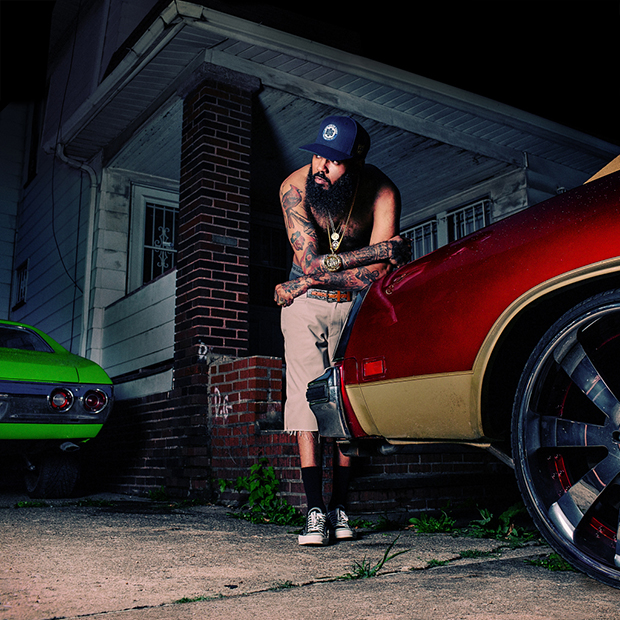 Stalley isn’t an artist I can say I’ve had too much history with. The first time I really remember hearing him was around 2009 maybe 2010 rapping in a room with a ton of independent artists like Curren$y. Although I thought him to be the best out of the bunch, he didn’t move me to want to go and listen to his music. I really didn’t hear from him much until it was announced that Rick Ross had signed the underground act to his growing MMG Empire.

Stalley first announced this album to be in the works earlier in 2014. I heard him announce it was coming, but honestly didn’t expect to hear anything from it as he doesn’t seem to fit with Maybach Music naturally. Still he continued to grind. The best thing that may have happened to Stalley was the legal woes of Maybach Music’s own Meek Mill. With Meek incarcerated for some time, Stalley was able to finally get a release date for Ohio. This album has been out for a little while, and the streets are calling it a classic. Let’s see if the quality of music stands up to the hype.

1. Welcome to O.H.I.O
Produced by Rashad
Heavy drums and horns start off the track. This is obviously just an introduction. He is just flossing his confidence with this track as through the track you hear “put your money on me” in the background. Nice track to listen to in the whip.

2. Jackin’ Chevys
Produced by Rashad
This song starts with a news clip about a car robbery. The beat starts off with hard hitting drums. This song is about stealing cars. I was expecting something a little different from Stalley, but this is entertaining as well. Stalley shows off his storytelling a little bit in both verses. He is one of the few rappers I have heard that can do an ignorant track with such visual detail.

Cruising down the street in your 64
Banging your beats, shining your gold
Went to the store for gas and brews
Then pulled up to the park where they shooting some hoops
A car pulls up, who could it be
My nigga KP in the 20 AZ
Rolled down the window, where’d you get that from
Code snatch him out his ride with this new hand gun
I swear them boys in my hood are always hard
Come flossing around, they’ll take your car
See around these parts, Chevy jacking is law
And what’s mine is mine and what’s yours is ours

3. Problems
Produced by Rashad
This is my favorite track so far. This is song is so vivid. From the beginning of the track that starts with, “got baby momma drama, get my momma out the projects”. The beat is heavy hitting and the lyrics are amazing. This is yet another track that I enjoy bumping in the car.

4. Boomin’
Produced by Rashad
This beat is a little lighter with more strings and light horns in the background and light percussions. Here we find Stalley telling his story about his life and how he ended up in the rap game. Pretty dope.

5. What It Be Like
Featuring Nipsey Hussle; Produced by David “D.A.” Doman
Smooth horns and light keys start this track off. Stalley starts rapping, “what it be like” and you begin to hear light drums as well. This is something really smooth and you can really enjoy listening to this on the Highway. This is a dope song, but I’m not sure Nipsey brought anything extra to it. 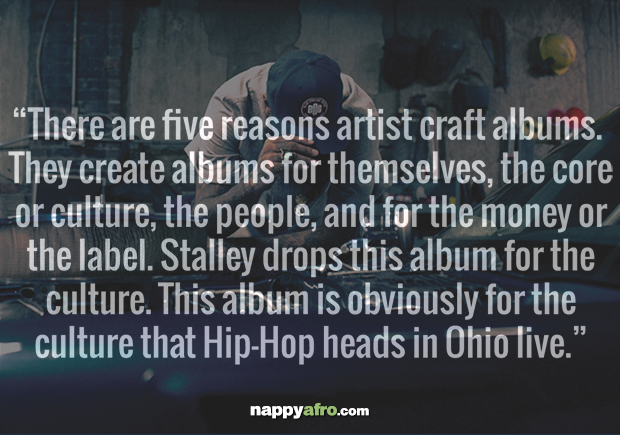 6. One More Shot
Featuring Rick Ross & August Alsina; Produced by Noel
Looking at the tracklist, and you can see why this is one of the most anticipated tracks from the album. This joint is just about having fun even with all of life’s stresses. Stalley drops two dope verses, while August rides the hook perfectly. Rozay had the dopest verse on this though.

7. Always Into Something
Featuring Ty Dolla $ign; Produced by Rashad
It’s important to note that I’ve felt like driving every since I put this in album on. The joint doesn’t pull me out of the car either. Stalley rides this horn heavy song perfectly. I’m upset that Ty Dolla $ign didn’t rhyme, but he does the hook perfectly.

8. System On Loud
Produced by Black Diamond
This is another smooth joint, but this one has very very light percussions. I can’t say that I like this one. It just kind of comes and goes and you don’t feel like it did anything for the album.

9. 3:30pm
Produced by Rashad
Eh… Although alone this would probably be a dope track, we already have 8 other tracks that accomplish this creating the same feeling that this is. It’s starting to get somewhat repetitive.

10. Chevell
Featuring & Produced by Rashad
Okay after Stalley falls off a little he reenergizes the album. This song finds Stalley rapping over a smooth, almost R&B sounding track, with out of worldly strings. Stalley is personifying his vehicle. If you don’t pay close enough attention to the detail, you will surely think he is talking about a woman here. That is a great compliment to MMG’s story teller. This is one of the better joints.

11. Free
Produced by Black Diamond
Over the last few projects I’ve reviewed I’ve noticed that I really like the production of Black Diamond, but don’t know who Black Diamond is. Anyway, we have Stalley rapping over a smooth beat that is heavily influenced by the Blues. Unfortunately Stalley wasn’t really saying anything. I wish he would have come up with a dope concept. He didn’t and it makes me feel that this track was wasted.

12. Navajo Rugs
Featuring De La Soul; Produced by Rashad
Stalley brings De La Soul out of retirement of this funky percussion heavy beat that Rashad provides. For people who don’t know what Navajo Rugs are, they are high end rugs that are hand woven and are extremely detailed. This track has the Emcees dropping some dope bars. The thing about this song is that Stalley is comparing his bars, which are intricate and dope on many levels, to Navajo Rugs. He puts so much work into them, yet people walk over them. This is a dope song, and great way to end the album. The album ends with a little girl, I’m assuming Stalley’s daughter, and she is yelling “Ohio will love forever!”.

Bottom Line:
In my opinion there are five reasons artist craft albums. They create albums for themselves, the core or culture, the people, and for the money or the label. Stalley drops this album for the culture. This album is obviously for the culture that Hip-Hop heads in Ohio live. This album is also very car heavily inspired. Whether it is Stalley making an album for you to put in your car and just ride out to or if it is personifying a car you can tell that Ohio is heavily invested into vehicles.

The streets (the internet) claim this is a classic, and maybe to people who live or grew up similarly to Stalley it is. Still I can’t help but get over that this album is very repetitive. No, I don’t think there is one really bad song, but I do think that this album has 3 or 4 songs that sound almost identical. Still this album was great and I understand why people enjoyed it.