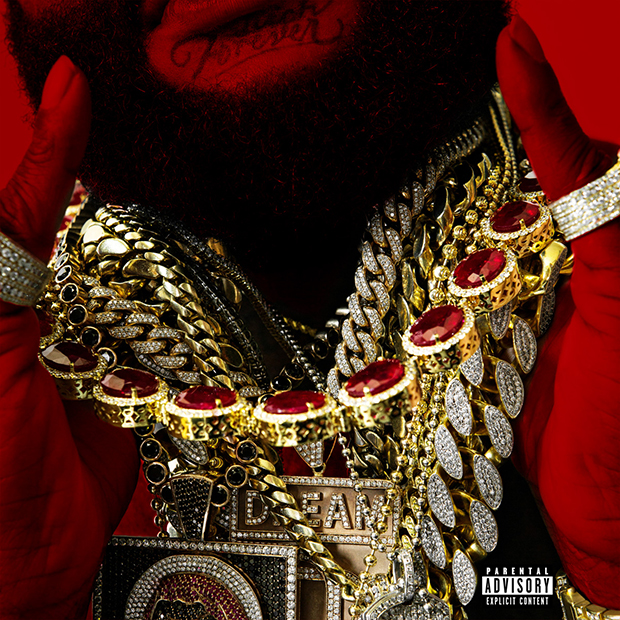 Rick Ross drops his seventh studio album, and second one in twelve months, Hood Billionaire, and hopefully his seventh album will be his lucky one. The Boss has been making moves in other avenues like opening new Wingstop restaurants; will he still have that same passion for Hip-Hop? Let’s see!

1. Intro
Produced by Eddie “eMIX” Hernandez
I mean it’s an intro. Nothing special. Next.

2. Hood Billionaire
Produced by Lex Luger & Deedotwill
This is the title track and you can tell Ross swung for the fences on this one. I mean the lyrics aren’t that complex on this one, just Rawse spitting dope boy motivational lines to you. The beat is riding, so I can see this one getting some play in the bando.

3. Coke Like the 80’s
Produced by Beat Billionaire
I mean what else would you expect from Rozay? Dude is from M-I-YaYo. This is his ode to the coke game. This is what you play in the back while you bagging up a brick in the bando.

4. Heavyweight
Featuring Slab; Produced by Beat Billionaire
This song might have fit with the old Ross, but now with this new, slimmer version of Rozay, can he still call himself a heavyweight? The hook is kind of redundant, but we don’t care about redundancy in the bando.

5. Neighborhood Drug Dealer
Produced by Metro Boomin’
Rawse is taking the Plies formula on this album I see. Every song title is driven into your brain on the hook. Again, the beat is sliding and this one will get heavy play in the bando.

6. Phone Tap
Produced by Ben Billions
Can’t have all this drug talk and no talk about your phone not being tapped, right? Here you go. The production is on point again, which is no surprise coming from Rawse.

7. Trap Luv
Featuring Yo Gotti; Produced by Deonte “MoneyBag$” Hayes
I really wasn’t a Gotti fan until I had to review one of his albums. He won me over with his work effort and a J. Cole feature. This one is for the boys trappin out the bando. If you ain’t ever done a hand to hand, this ain’t for you.

8. Elvis Presley Blvd.
Featuring Project Pat; Produced by DJ Toomp
Two Memphis legends on back to back tracks…wow! Ross didn’t try to go technical with the hook on this track. Funny moment of the song was, “I GOT PRISCILLA, I GOT PRISCILLA!”. Why he said that so aggressive, I don’t know. But I laughed. We did have a Playa Fly mention on this track, so I know P-Body will love that. 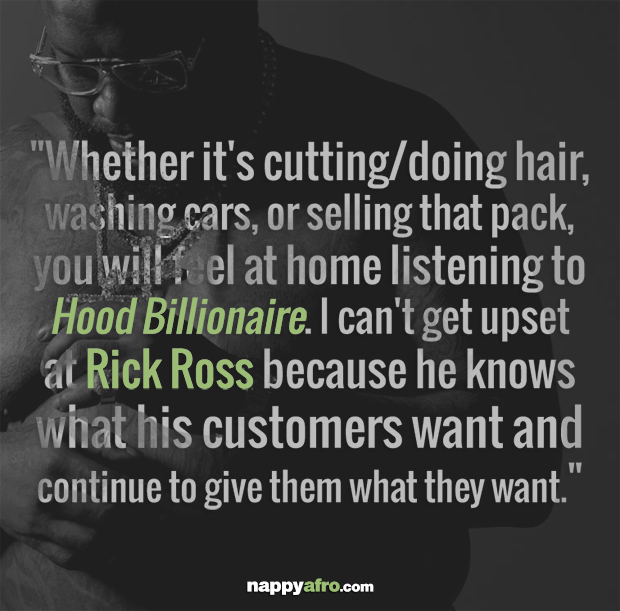 9. Movin’ Bass
Featuring Jay Z; Produced by Timbaland
This is the song that caused a rift between Ross and Timbaland. Apparently Timbo released a version with Jay Z and newcomer Tink trading lines back and forth. That didn’t sit well with Rozay and now we have some “beef”. I mean, a Jay feature ain’t what it used to be. Maybe that’s why Rawse kept him on the hook.

10. If They Knew
Featuring K. Michelle; Produced by Timbaland
The “Queen of the Basics” laid vocals on the hook for this song, and I didn’t like it. This is the single that’s blazing radio now, and I really think the hook is what brings this down.

11. Quintessential
Featuring Snoop Dogg; Produced by DJ Toomp
Not really feeling this song. I can’t really vibe with Rozay’s slow flow on this track. Some say this one will grow on you, but after hearing Snoop flow on this one…I’ll pass.

12. Keep Doin’ That (Rich Bitch)
Featuring R. Kelly; Produced by V12 The Hitman
I mean, Kellz doesn’t shy away from the limelight does he? It’s hilarious. The production on this one will get the party started. Kellz has a way to say some stuff that makes you giggle. I guess that’s why we can’t stay mad at him. I mean, it’s not like he raped someone.

13. Nickel Rock
Featuring Boosie Badazz; Produced by Tracy Tyler
Finally, he went back to the bando with this song. I thought that was the direction he was going for with this album, and then he went away from that. But you get 100% Nigga on this track. What did you think you were gone get from Boosie AND Rozay? Boosie admitted that he got his first blow job from a $5 rock. This might be my favorite track thus far.

14. Burn
Produced by Beat Billionaire
He might have gone a little overkill with this one. This song made me tired.

15. Family Ties
Produced by Cardiak & CritaCal
I wouldn’t go as far as saying this is album filler, but I’ll be damned if it didn’t feel that way. It was like there wasn’t any direction on this song. He was just rapping.

16. Brimstone
Featuring & Produced by Big K.R.I.T.
FINALLY! Ross made a song that was soulful like he did with “Tears of Joy”. Ross coming off like this is why I really fuck with his music. His ability to make a song that relates with us “regular” dudes is what separates him from the other rappers in his lane.

Bottom Line:
Rick Ross gets credit for dropping two albums in a year. Looks like he learned instead of giving them a mixtape that sounds like an album just put it out for sale. Ross didn’t take any chances with his sound or his music on this album. He kept the recipe the same and he got the same results as he has the previous six times. He didn’t alienate his core base; he gave them music they can listen to while they do their jobs. Whether it’s cutting/doing hair, washing cars, or selling that pack, you will feel at home listening to this. I can’t get upset at a rapper that knows what his customers want and continue to give them what they want. Why take risks when what you have been doing is working?