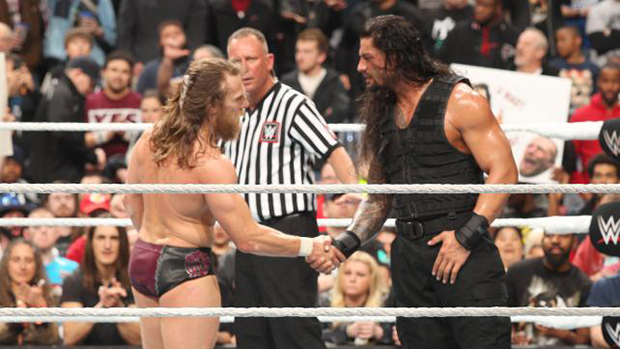 I was about a hour and a half behind when I started watching WWE Fastlane on Sunday night so I made sure to steer clear of Twitter and the Internet in general because of spoilers. I bring this up because the WWE app kinda fucked that up; I forgot that it sends your phone notifications of the results of some the matches. So I saw something on my phone like “John Cena submits to Rusev”.

But weirdly enough, seeing that actually made me want to see the match. Did John Cena really tap out from The Accolade? Technically, yes. After a low blow and distraction from Lana, Rusev made Cena pass out to The Accolade. But in the record books (Wikipedia?) it’ll say he lost via submission. Rusev leaves with a bad chick, his Unitedd States Championship, and his record of never being pinned or tapped out unscaved (And Saule Wright doesn’t get to riot). So what does this mean? Get ready for SUPER Patriotic Cena at the rematch at WrestleMania. We may even get a training montage in the likes of Rocky 4.

The main event of WWE Fastlane was Roman Reigns versus Daniel Bryan. And it should have been because it was a good match. Roman Reigns didn’t get booed. Much. Daniel Bryan played the crafty veteran heel for much of the match and a heelish Bryan is a cool thing.

The match was basically Reigns trying to prove to the WWE Universe that he was worthy of his WrestleMania 31 spot. If he proved it or not is subjective, but he did a good job and I’ll think he’ll be fine at when he faces Brock Lesnar on March 29th. Would it have been awesome to see Bryan tap out Brock? Of course. But it’s not gonna happen (At least at WrestleMania 31). Speaking of Daniel Bryan, what’s up next for him?

Other notable things that happened at WWE Fastlane: