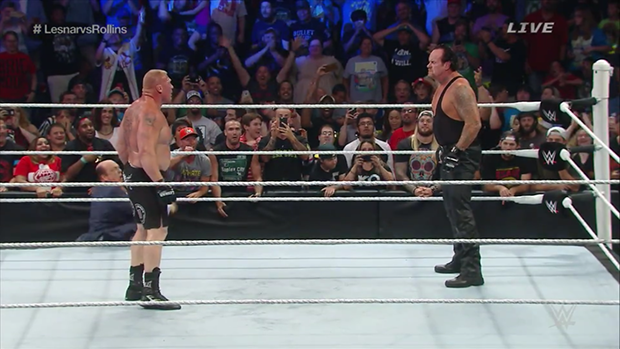 The buzz coming into WWE Battleground wasn’t great. Matched with the fact it’s not one of the bigger named pay-per-views, the card didn’t appear compelling either. But now that the event is over, I’ll admit that it was better than expected. It brought another classic from John Cena and Kevin Owens, an impromptu Divas triple threat match, and the return of the Undertaker.

So yeah, the Undertaker came back and it wasn’t Wrestlemania. He interfered in the WWE World Heavyweight Championship match right when Brock Lesnar was gonna beat Seth Rollins (Yes, the lights did go out). Taker then proceeded to deliver two tombstone piledrivers to Brock. Now, if you read the dirt sheets before Battleground, you were tipped off to Taker appearing at the show (We even saw a picture of him working out). What we don’t know is the reason: Did Undertaker attack Brock because of the streak ending or because Brock broke Kane’s leg last week? It’s kinda obvious that they’ll meet at SummerSlam.

And that brings us to the Gif(s) of the Night: The Undertaker takes Brock Lesnar to Tombstone City.