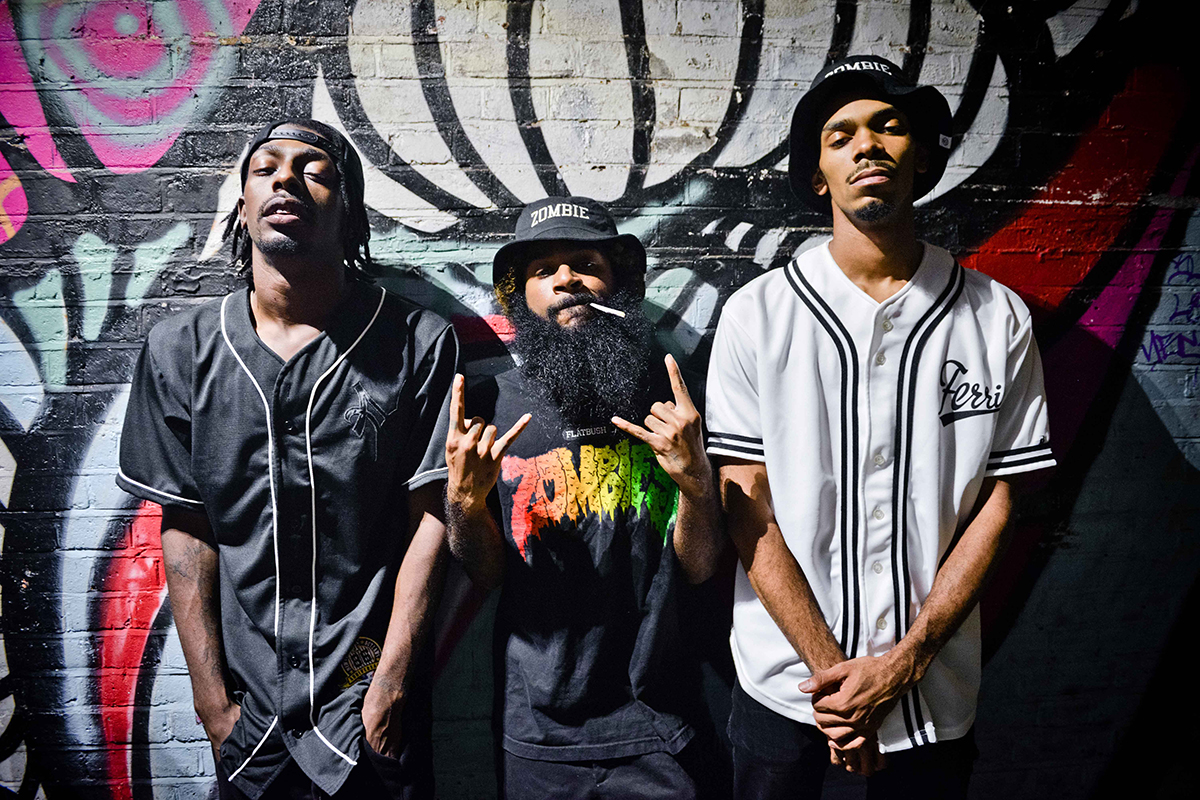 I’m going to be honest with you. Flatbush Zombies are a group that I am highly intrigued by, yet a lot of their stuff goes in one ear and goes out the other. I have their last mixtape, BetterOffDead and outside of “Drug Parade”, “Bliss”, and maybe another joint, I don’t have a lot of recollection of what it is EXACTLY that I like about them. I can’t even tell those niggas apart. Meechy Darko, Zombie Juice, & Erick the Architect; I don’t know who’s who. All I know is that Erick produces. Sorry, I know, GUILTY AS CHARGED!!! So, after a year of the Zombies being “quiet”, I’m going to dive into this album with a renewed focus and interest into FBZ. Here we go.

1. The Odyssey
Produced by Erick Arc Elliott
I swear the beginning feels like this Bone Thugs/Three 6 Mafia crossover and )metaphorically speaking) some New York niggas came and just stomped the fuck out of it in their Tim’s. This isn’t really about anything, it’s just these dudes stunting lyrically on the track. And I definitely fucks with it. I don’t know what it is, but Zombie Juice’s verse just felt more comfortable with me, though Meechy Darko killed his shit. Good start!

2. Bounce
Produced by Erick Arc Elliott
I remember this being the first song they released from the album and didn’t remember what I liked from it. Once again, it’s FBZ Syndrome. The song goes, but once again it is nothing special. THAT IS NOT SAYING IT IS BAD PEOPLE! REMEMBER THAT BEFORE YOU SEND THE HATE MAIL!!!

3. R.I.P.C.D.
Produced by Erick Arc Elliott
I swear I thought those police sirens were coming from outside my house. From the first four listens to this album, this was one of the standout tracks from 3001. If you remember growing up with your CD sleeve booklet and Walkman, you’re going to get somber. Zombie killed it, but it was Meechy who in the third verse… let me just say… he becomes unhinged later in his verse… I won’t spoil it buuuuuutttttt…..

I sit in silence, speaking tongues and burnt bibles
So open letter to all of my rivals you will not vanquish my titles
My semi-automatic, will splatter a nigga like Jackson Pollock
Deranged since birth I was conceived in an insane asylum
I solemnly swear this evening to refrain from the violence

4. A Spike Lee Joint
Featuring Anthony Flammia; Produced by Erick Arc Elliott
That bounce all the kids are doing these days at concerts and clubs… your old ass will be doing this too. FBZ are here claiming their independence with a production that feels like it would fit in perfectly in the midst of one of Spike Lee’s early films. Not that bullshit he’s making now…

Sidebar: Like seriously my dude, don’t see Chi-Raq yo! I didn’t even see the movie and I am urging you not to see this. I don’t know. Where the fuck is Short-T when you need him?

5. Fly Away (Interlude)
Produced by Erick Arc Elliott
I don’t have much to say about this, being that this is an interlude, except for… this is the prelude to hell.

I HAVE ASCENDED, I’M TRYNA BE BETTER THAN GOOOOODDDDD!!!!

Pseudo-atheism and shameless plugging aside, remember when I said the “Fly Away” interlude was only the calm before the storm? Well, not really in those words but, that was purgatory compared to what we have here. Hellfire and brimstone. Meechy has now officially become unhinged describing his motivations. All that, with an outro that prepares us for the second half of the album. This is, in my opinion, the best song of the album thus far.

7. Smoke Break (Interlude)
Produced by Erick Arc Elliott
Ready for that drug talk?? Being that I don’t smoke, I can’t really relate to this song, but I know many stoners out there in my circle so… if you’re a FBZ fan… have fun. Not for me. Next.

8. Trade-Off
Produced by Erick Arc Elliott
They’re not talking about much here, except flexing about their success. There’s a Trayvon shoutout here… immmm… my friends know how I feel about shouting out the dead but… whatever. Still a dope song. Dope chorus as well. Meechy explained my life in eight words.

40 ounce, sipper, until my liver give away

9. Good Grief
Featuring Diamante; Produced by Erick Arc Elliott
This is just one of those songs you can just play back and chill with yourself…

Note to reader: I say “yourself” as referencing “myself” due to being a loner and choosing to isolate “myself” to avoid encountering my social insecurities head on, therefore having the time to write these reviews…

Sidebar: Diamante, can you just croon in my ear so that it’ll help me sleep better at night?

11. This Is It
Produced by Erick Arc Elliott

2Pac in 96 and troublesome
27 club, here I come
Comma, c-c-c-c comma, comma, comma, a whole lot of decimals
I just s-see my account and c-c-c-c-c-c-c count all my blessing up
Bloodstream full of chemical, crip, blood, twist your fingers up
Better than some of them veterans
Bet they gon’ say it’s beginners luck

I thought Juice Zombie was going to be my favorite Flatbush Zombie member at the end of this album, just because of how relaxed his flow was and how it just rocked, but, nope… Meechy wins. He just too real. Fucks with this heavy.

12. Your Favorite Rap Song
Produced by Erick Arc Elliott
After all the drug songs that engulfed the second half of this album, they end the odyssey with 4-5 minutes of just bars, bars, bars, and more bars… I don’t remember a single line from this.

But that doesn’t mean I hate it. Not at all. I just need to listen to this more, in order to catch the lines. This is a repeat listen.

Oh yeah, the last few minutes are just fans calling to express their FBZ worship, but who wants to listen to those nerds eh?

So, in conclusion. I came into this album, knowing what I was going to get, but not knowing at the same time and that is mainly because of my very few run-ins with the Zombies since their start. They embody a lot of the characteristics that I love about groups that I grew up with/later got into, and they took that sound and modernized it for the Millennial crowd. Is it a perfect album? Nope. I could do without two or three songs at least. Do I envision myself playing this throughout the year? Yes. This is one of those projects (unlike the last project I reviewed) that I only see getting better with time; patience and an ear for everything twisted and grim.

Meechy is that dude to where you wait to hear HIM on a FBZ track. Zombie Juice comes in second, Erick, he’s not bad, but nothing he says stands out to me. Although he is dope on the beats and on the hooks. Yeah, I’m glad this came along and I got something to bump until whatever comes next. When is Summer coming again?

Sidebar: They may or may not have already performed in my hometown so, I may want to hit that shit up soon…..yeah…..I HAVE ASCENDED!!! I’M TRYNA BE BETTER THAN GAAAWWWokay y’all get it. Twos.