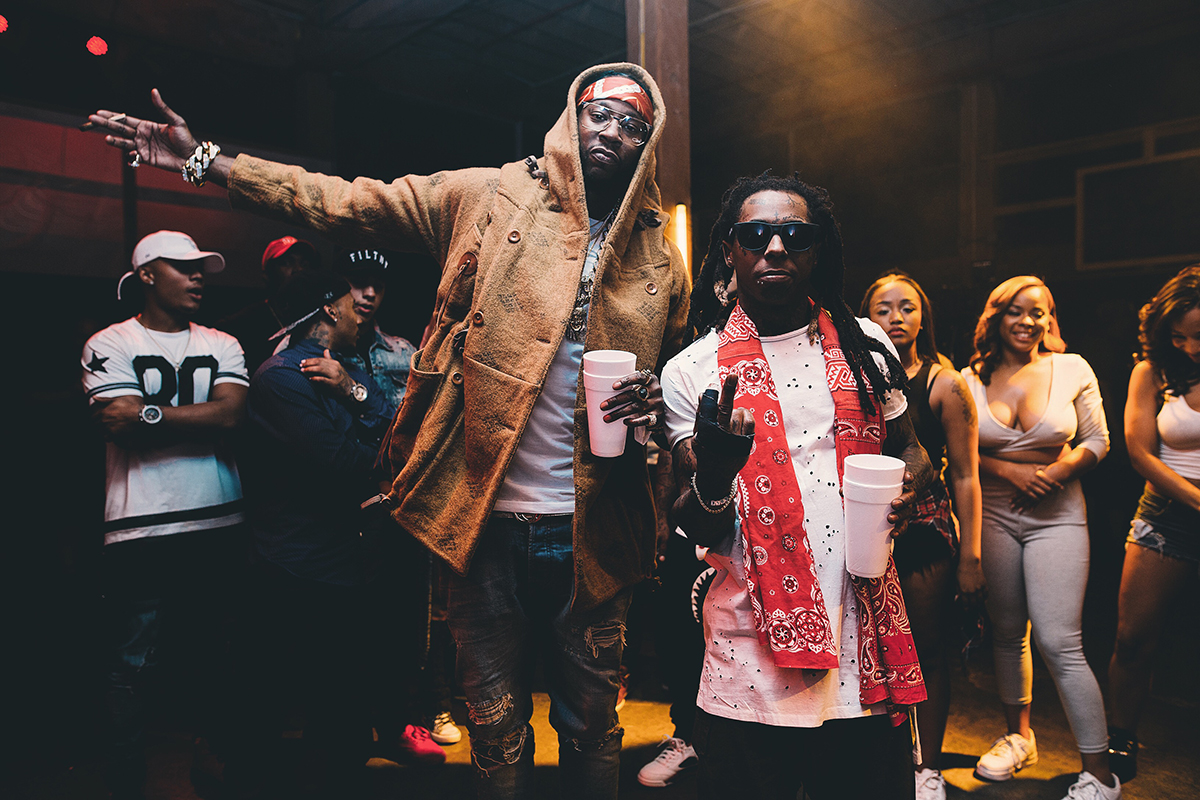 Duffle Bag Boys. Well at least that’s what comes to my mind when I think of 2 Chainz & Lil’ Wayne together. They’ve been frequent collaborators since 2007 when 2 Chainz was still “Tity Boi”. Back then, Wayne was considered the best rapper alive and Chainz was still on the rise and no one knew of him like that. Who would’ve thought almost 10 years later Chainz would have an incredible fan base like Wayne’s and they would link up and make an album? I sure didn’t. I will admit that they’ve had a chemistry and every track they’ve done together has not been a bad one leading up to this album. When they announced the album I must say, I was excited. Wayne was my favorite for a long time and 2 Chainz has some undeniable songs. So let’s get into it. Collegrove

1. Dedication
Produced by Southside & Mike Dean
Album starts off with an old recording of Weezy and Chainz talking to each other. Weezy tells Chainz to tell Ludacris to let him go so he can be Young Money. LOL. Good laughs. As far as the song that comes in after the skit, the title describes it all. 2 Chainz is the only rapping here and he showing his loyalty and appreciation to Wayne, which comes out very dope. As far as the production, Southside and Mike Dean do a good job creating a pretty laid back canvas for Chainz to tell his stories about him and Weezy. Album starts off on a pretty good note

2. Smell Like Money
Featuring Lil’ Wayne; Produced by Da Honorable C.N.O.T.E.
I just wanna start this off by saying Da Honorable C.N.O.T.E. is a BEAST. I feel like he does not get enough credit. His sounds sound like samples! Great producer! Lets get to the song: I like it.You can hear the chemistry here between the two.Weezy kinda starts the song off with a long bridge and Chainz comes in with a pretty good verse. Good song and good production. But it’s not the one of the best on the album.

3. Bounce
Featuring Lil’ Wayne; Produced by Infamous & T@
Okay they was gassing on this one. This is the  back and forth I was looking forward too. This one of my favorite songs on the album. But oddly enough, I’m not a big fan of the production. I just love how their energy “bounced” off each other. No pun intended. The video is pretty dope too.

4. Gotta Lotta
Featuring Lil’ Wayne; Produced by Mannie Fresh
THIS THAT ONE RIGHT HERE. Mannie Fresh did an unbelievable job with the production. Him and Weezy still undefeated! This is my favorite song on the album. Great instrumentation. Great hook. Pretty good lyrics. Guess what they talking about? “We gotta lotta dopeeee!”. Yea . I fuck with this one.

5. MFN Right
Produced by Mike WiLL Made-It & Zaytoven
I initially heard this on Chainz’s tape Felt Like Cappin’. You know the production on fire but still I’m not a big fan of this one Probably because it’s right after my fav song on the album. Kinda felt like it slowed the album down a bit. I wouldn’t have put it on here. But then again I’m just civilian; What do i know?

6. Blue C-Note
Produced by Mr. 2-17
I imagine a lot of big booty bitches in the strip club when I hear this one. I’m not a club person so this doesn’t get too many plays from me. Doesn’t mean it’s a bad song. Just not my cup of tea. This sounds more like a 2 Chainz song than a joint song. Meh.

7. Not Invited
Produced by TM88 & Reignman Rich
You know how i said “Gotta Lotta” was my fav song? I lied. Its this one. 2 Chainz killed this song! From the flow, to the energy, he owned the track. I gotta listen to this one at least once a day. 808 Mafia is really underrated as well. Great team of producers. This was on Felt Like Cappin’ as well.

8. Bentley Truck
Featuring Lil’ Wayne; Produced by Metro Boomin’ & Frank Dukes
This song dope as fuck. I like this one a lot too. So far, the album has been really fun and enjoyable. You gotta play this one at ignorant levels though. This one of Chainz’s best hooks on the album. Plus Metro and these sounds man. They are very abstract but he makes them work every time. You didn’t hear Wayne rap until like 2 and a half minutes in the song. I kinda wish it was a little earlier. But hey, dope track.

9. 100 Joints
Produced by Bobby Kritical
There has not been one bad beat on this album so far. The production has been almost immaculate. By now, you starting to get repetitive flows from 2 Chainz. But then he switched up in the 2nd verse and that’s the high point of this song. Okay song. Not a classic.

10. Rolls Royce Weather Everyday
Featuring Lil’ Wayne; Produced by Lil’ C & The Mad Violinist
Lil’ C killed the production here. Those violins dope as fuck too! I really like this song. I just wish Lil’ Wayne would rap first. He’s only really rapped once on like one song. This song is still flames. One of my favorites on the album. Great verse from both rappers. This one might stand the test of time as the best one if we look back at this album three years later

11. What Happened
Produced by Ben Billion$

I thought you wasn’t fuckin with me no more , damn girl what happened!?

LOL. I think every dude has said that before. This song is dope and we finally get Wayne rapping first. A little bit of singing but he rapped too and he gassed on the track. This the first song that actually felt like a Lil’ Wayne song featuring 2 Chainz featured as opposed to a joint song. Not one of my favs but it’s still really enjoyable. The production on here is really universal. It’s a soul sample in there but it’s still a trap beat. Pretty dope.

12. Section
Produced by London on da Track
Every time I hear production from London on da Track, I think I’m going hear Young Thug eventually. Not nessacrily a bad thing, they just have a certain sound. Still, I don’t really care for this song. It’s whatever. They could have ended the album on a better note, which probably will affect my score. Not a bad song, just not a great one like I was expecting.

I REALLY enjoyed this album. I’m a fan of both artists. I feel like when 2 Chainz went over there and started doing music with Kanye, it unlocked something in him. He’s been on fire ever since. As far as Weezy, he was my favorite during the Da Drought 3 days. I was really disappointed with his music a few years back. But it looks like now, he’s reclaiming his greatness. That lead to me wishing it was more Weezy no the album. That would have made the album better.

A lot of times this album felt like 2 Chainz FEATURING Lil’ Wayne (Which it technically was), instead of 2 Chainz AND Lil’ Wayne. Nonetheless, the production was unbelievable. Great beat selection with lyrics were, at times, on point. If I had to recommend songs from this project, it would be “Gotta Lotta”, “Not Invited”, & “Rolls Royce Weather Everyday”. I will give this album a 3.5 and it almost got a 4 aside from the outro and a couple fillers. Still, give this album a listen.