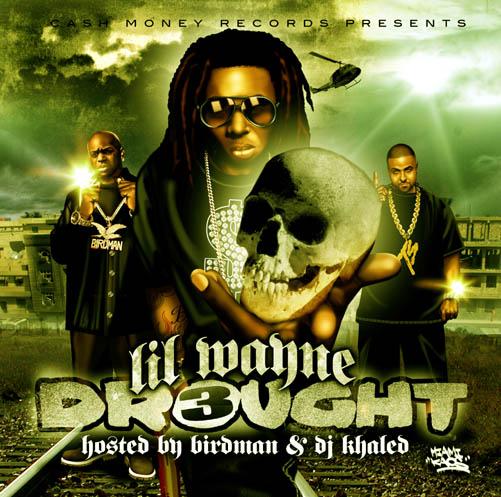 Damn you Lil’ Wayne! Do you come out with a new mixtape every few days? Actually, I’m not mad at Weezy at all. By now, there aren’t many people who can argue about his talent. His constant mixtape visibility has made him by far the hottest MC in the streets right now. The only problem I can think of: How long can he keep it up? Not all of his mixtape releases are to the level of his Dedication series. And let’s be honest, a lot of the time Wayne is just rapping about nothing in particular. With all that being said, let’s take a look at one of his most recent and anticipated mixtapes, Da Drought 3. Da Drought 3 is a two disc mixtape and it mostly is consisted of previously released music and freestyles.

~Disc One~
1. Intro
On the “Intro” to the first disc, he raps over Mims’ “This Is Why I’m Hot” with a reggae influenced flow. The rhymes are better than Mims’ but I wish he woulda used a regular flow. Not bad but could have been better.

2. Black Republicans
Featuring Juelz Santana
This song has been on the mixtapes for a few months already. I liked when I heard it then and I still do. You can also take this as a diss with the lines they used (“More like a Black democrat running them outta office”) and being they rap over Jay-Z and Nas’s “Black Republican” beat. I actually think Juelz had the better verse on the song though. Wayne sounded high at the beginning.

3. Upgrade
Wayne raps over Beyonce’s “Upgrade” with good results. He gets down towards end with “Put a motherfucker on ice like the Maple Leafs. That’s a hockey team and I ain’t on no hockey team, but I’m champion, where the fucking Rocky theme?” Nice.

4. Put Some Keys On It
Rich Boy’s “Put Some D’s On It” beat (of course). Average Weezy. The song got awkward when he started trying rhyme balling, Jordan, and warden.

5. Ride For My Niggas
I don’t recognize the beat (It’s hard by the way), but this track sounds like a song rather than freestyle. On this song Wayne shows he’s the hottest (“And when I as five my favorite movie was The Gremlins, ain’t got shit to do with this but I just thought that I should mention”).

6. Don’t Stop, Won’t Stop
Featuring Nikki Mena
Weezy brings out his new Young Money rapper, New York’s Nikki Mena. She’s alright I guess. The line “You be Harry Potter and I be Hermione” was suspect though.

7. We Takin’ Over (remix)
Wayne takes another shot at DJ Khaled’s “We Takin Over”. This is the one with the line “Damn right I kiss my Daddy”. He spitting hard on the song but he sill rapping about kissing Birdman in the mouth.

8. Get High, Ruled The World
Wayne rhymes over Nas’ “If I Ruled The World”. As always, Wayne’s spits here; no rewind material though. The hook could have been better.

9. I Can’t Feel My Face
I can’t place the beat (It’s a sample, but I think its old Cash Money), but on this song, if you listen real hard you can hear Jay-Z looking for his flow. I like the line, “I been around, still around like them Gieco cavemen” though.

10. Dough Is What I Got
Lil’ Wayne living out his Jay-Z fantasy here when he raps over “Show Me What You Got”. Even though I heard everybody rap over this beat, Wayne does it justice with line like “Only down South rappers who could have been in The Firm”.

11. Seat Down Low
Weezy returns to a Mannie Fresh track with this one (T.I.’s “Top Back”). After about a minute though, he loses directions.

12. New Cash Money
Featuring Brisco
New Cash Money artist Brisco raps first on this one (over Cam’ron’s “Down And Out”). From what I heard here, Brisco is an average rapper. Looks like Wayne still the only real player on that team.

13. Promise
Yep, Lil’ Wayne over Ciara’s “Promise” (He also tries to holler a Ciara too). Skip this one.

14. Outro
“Outro” to disc one. Wayne says if you bought this you stupid because it’s free.

2. Blooded
Did Lil’ Wayne just get jumped into the Bloods? As Murs said “You can’t start gangbanging in you mid-twenties”. This is over Jeezy’s “I Luv It”. I skipped this one because it’s just ridiculous.

3. Live From 504
Wayne raps over Young Dro’s “Shoulder Lean” like it’s his. Once again, nothing memorable but still good.

4. King Kong
Anytime a rapper can make a song better, I like it. The beat is Jibbs’ “King Kong” so you know the lyrics are way better.

5. Dipset
I guess Lil’ Wayne is a Diplomat now. He raps over Jim Jones’ “Reppin’ Time” and goes about him being “So Dipset”.

6. Forever
Lil’ Wayne once again goes Dipset and raps over Cam’s “Dip-Set Forever”. I wasn’t feeling this one that much.

7. Walk It Out
Weezy F. gets his snap on when he use DJ Unk’s “Walk It Out” for this one. Once again he says something about him and Baby kissing (“I hope when we kiss it make you sick to your stomach”). It’s okay, but after what Andre 3000 did to the remix, it hard to do anything better on this beat.

8. Swizzy (remix)
This freestyle is actually better than the original (Swizz Beatz’s “It’s Me Bitches”). This one has Wayne at his best with lines like “Beating up your block, yeah I get my Emmett Till on. In the new edition, yeah I get my Johnny Gill on”).

10. N.O. Nigga
Weezy changes Jeezy’s “Go Getter” to “N.O. Nigga” on this one. Around this time in the album, a lot of these rhymes are starting to sound the same. The length is a bit much. On this one he doesn’t surpass the original.

11. Back On My Grizzy
I can’t place the beat on this one either, but Wayne rides the hell out of it. That’s all.

13. President
Featuring Curren$y
I still not sold on Currency, but he does okay song here. To me though, this song sounds like a lot of average rappers (Oh yeah, it uses Jay-Z’s “Dead President”).

Bottom Line:
This is a good mixtape but its great if you a Wayne enthusiast. The size is a bit much but it’s still fun. If Wayne would have cut some of songs down, he would had another mixtape classic. But because of some of the filler, I can’t give this one 4 starts. Still you can tell that Weezy had fun when he made this mixtape. In the “Outro” on disc two he says, “I just love music”. Who can hate on that? If anything, this mixtape further shows Wayne’s love of Hip-Hop.