After a year that’s given us a lot of good films with a fair share of bad ones sprinkled in Bright lands somewhere in the middle. This Netflix release is the biggest of its kind, costing the streaming giant a whopping $90 million to produce. Further positioning Netflix as a new competitor the studios should be taking seriously. Without a theatrical run, Bright success will be measured on the number of new subscribers it brings into Netflix. Which means word of mouth will need to be overwhelmingly positive for Bright if Netflix wants to consider the film a good investment.

Bright is part cop drama part fantasy with a sprinkle of film noir. After detouring away to direct Suicide Squad, David Ayer returns to his comfort zone teaming up once again with Will Smith and Joel Edgerton. Bright has that dark gritty tone that Ayers is known for with his previous cop drama End of Watch. With the use of real locations in Los Angeles, Ayers captures a rugged tone and brings to life a world that’s unpolished and dirty. Though Bright is not one of Ayers best directed films, it is one of his better efforts.

With a good screenplay written by infamous young writer Max Landis of Chronicle fame, Bright creates a harsh unpolished but recognizable fantasy world where humans, orcs, elves and fairies co-exist. Though Bright is a fantasy film its never to much that it takes you out the film. The central plot keeps you grounded as it focuses on characters and relationships dynamics with a pinch of racial undertones while the fantastical elements are woven through out for a nice balance. 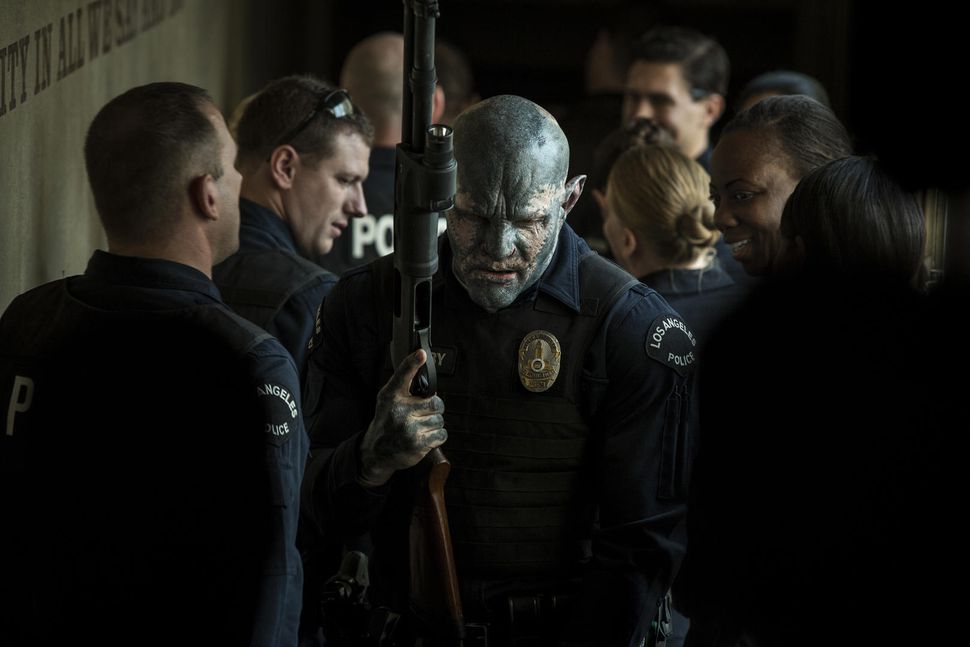 Bright follows LAPD officer Daryl Ward (Will Smith) on his first day back on the beat after being shot in the line of duty. Smith with his limited acting abilities and surplus of charisma gives a good but subdued performance as Ward, a family man whose resentful and jaded who and wants a life of normalcy for himself and nothing more. When Ward is hesitantly re-teamed with his Orc partner Nick Jakoby (Joel Edgerton) whom Ward blames for allowing his orc shooter to get away. Edgerton becomes unrecognizable in this film as Jakoby while still being the most relatable of all characters. An outcast, Jakoby wants nothing but acceptance by his peers and his race but hesitates on picking dueling sides.

The chemistry between Smith and Edgerton characters as a dysfunctional partnership really worked well as it built tension between the two and made their second and third act actions unpredictable as they are thrown into a world of magic and warfare when they come across Tikka (Lucy Fry), an elf in possession of a magic wand that grants power to whomever possess it. With Tikka and the magic wand knowingly in their possession a target is put on their backs both partners must put aside their differences if they want to survive a night under siege by elves, orcs, and humans all fighting to get possession of the wand. By the conclusion of Bright, I was pleasantly surprised at how much I enjoyed the movie for what it built and what could come from this fantastical world of gritty creatures and characters. Overall, I give Bright 7.2/10