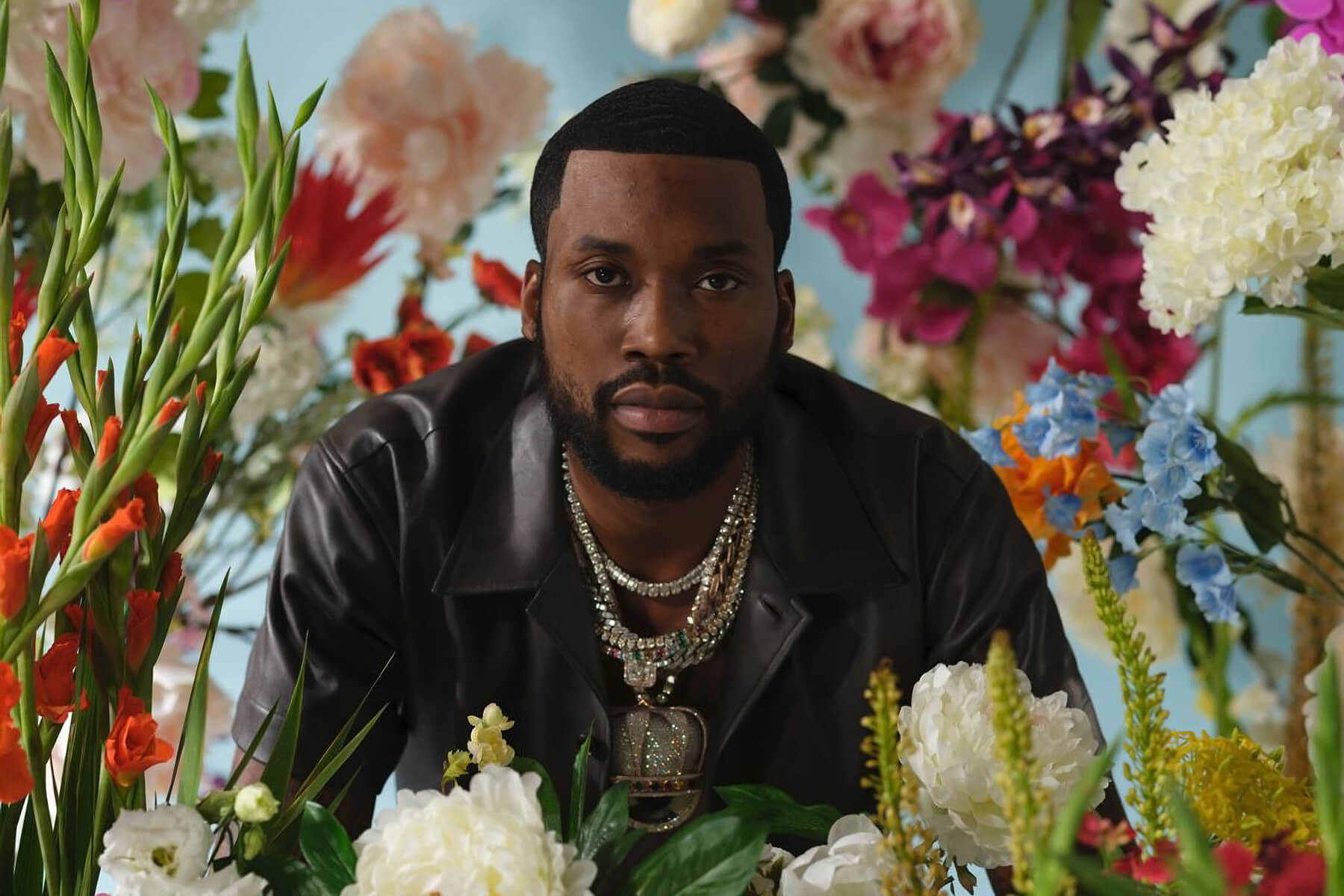 Meek Mill is a rapper that I want to champion more and feel like I should, but every time I do, it feels like the L’s just cling to him like a magnet. From “Back to Back”, to jail to a relationship with Nicki Minaj, to that nonsense he was involved in earlier this year, Meek just loves getting in his own way.

But I feel like where he was beginning to get everything mostly right, was his music. 2018’s Championships was the perfect blend of songs for the streets, songs for the club, songs for the ladies, and a splash of something for us Hip-Hop heads. There were a couple of filler joints that could have been left out but still mostly a highlight in his catalog.

So now, with Meek coming out with another album, amongst one of the most hectic times in album releases in the genre, what can he do to stand out? Let’s find out!

1. Intro (Hate on Me)
Produced by Johnny Juliano, Yung Exclusive, & Cardo
Based off the song title, if you can’t figure out where the sample is from, consider your Hip-Hop card revoked. I don’t know what I am supposed to get from this. Most of the time, Meek’s intros have a slow start that steadily builds into the bombast and Meek screaming at the top of his lungs, but maybe this song is just too immediate for me, and on top of that, Meek isn’t really saying anything of substance, or at least that’s how I am listening to it. I don’t know, but this is not really hitting for me right now.

But seriously, I don’t get anything from this outside of this is going to be a fire workout.

3. On My Soul
Produced by JW Lucas, Gingr, Yugo Getit, & Fuse 808
Has Meek ever used Auto-Tune before? I don’t remember, B-Easy if he has, please put the reference up for me, please [Editor’s Note: Meek Mill has been using Auto-Tune since 2012. He told Billboard in 2019 he was still trying to master it. And he recently got clowned for his use of it on this very album]. I mean I could hear this song be done better by someone like Lil Baby, or the beat reminds me of something Polo G would get on. It is like an amalgamation of Lil Baby, Lil Durk, Moneybagg Yo, Polo G, and more…with a dash of generic.

4. Sharing Locations
Featuring Lil Baby & Lil Durk; Produced by Nick Papz, ​xander., ​svdominik & ProdByKJ
Two of the rappers Meek is biting during this album show up here on this song. I want to like this more than I do, as both the guests have been growing on me since 2020, but it does nothing for me, to the point where I am wondering, “Is this album even for me?”.

5. Expensive Pain
Produced by Darko, Vianey OJ, & DZL
I’m sure Meek and any other person in his position, would hear this and feel like Meek dropping some gems. The problem is, I’m not in his position, so while the song is okay for what it is, I get nothing from it. Broke niggas can’t relate here. Now, do I have to relate to a song in order to enjoy it? No of course not, because Meek ain’t doing anything to keep me engaged; he’s rapping like he is on a treadmill, and the trainer just increased the speed and incline at the same time.

6. Ride for You
Featuring Kehlani; Produced by Savas Oguz & Austin Powerz
Kehlani is so derivative. I’m not even trying to be funny even though it sounds like it. But it is your typical “for the ladies” track tucked in the middle of the album. It has a purpose. But my girl is not a Meek Mill fan, so this will never be in our “Fucking” playlist.

7. FWM
Featuring A$AP Ferg; Produced by Jahaan Sweet, Hollywood Cole, & Boi-1da
I just want Ferg to have a song and make an album that will take us back to his Trap Lord days, but I need to come to terms that it is probably never going to happen. Outside of that, nothing too exciting here.

8. Hot
Featuring Moneybagg Yo; Produced by Eza, ProdByKJ, & Nick Papz
The song is not too bad outside of the environments that songs like this are intended for. Hood functions, riding around in the car, motorbike rallies. Outside of that, what and who is this for?

9. Love Train
Produced by Simon Gebrelul & AT
Meek and Auto-Tune is the worst relationship since Akademiks and a bottle of Hennessey. Am I just noticing this now or maybe it’s been a minute since I heard Meek but why is he rapping like once he stops the verse, he’ll die?

10. Northside Outside
Featuring Giggs; Produced by EMKAY & Cardo
Why Giggs sound like he trying to tickle you while whispering death threats in your ear? But yeah, this is fucking Nyquil Deluxe.

11. We Slide
Featuring Young Thug; Produced by Minor2Go, Denaro Love, & Tay Keith
I don’t hate this. No matter how much Thugger got on my nerves trying to do vocal karate and gymnastics in this song. It checks enough boxes on the melodic spectrum.

12. Tweaking
Featuring Vory; Produced by Maneesh, Boi-1da, & Vinylz
Vory is going to be an issue. But this is the shit that I wanted from Meek on this album. Not saying to not have the rich fly nigga shit but balance it out with the street shit. The Philly storytelling shit. I like this.

13. Love Money
Produced by Yung Dato, Amore & Fuse 808
The hook reminds me a bit of “We Slide”. But overall, this is a Lil Baby/Moneybagg Yo deluxe edition track.

14. Blue Notes 2
Featuring Lil Uzi Vert; Produced by xander. & Nick Papz
The number of times I heard this, I really wanted to like this more, but every time I go back to it, it’s in one ear and out the other. The beat is dope. The guitar sample makes it better, Meek is serviceable here, but Uzi is a complete afterthought here. Shame.

15. Angels (RIP Lil Snupe)
Produced by Dougie
A heartfelt track to Dreamchasers artist Lil Snupe who was gunned down 7 years ago. When Meek gets in his introspective bag, he can hit. It is just a shame it took this long in the album for him to get in his pocket. But many tracks in, and I finally got a song I can take with me.

16. Cold Hearted III
Produced by Bkorn & Austin Powerz
It’s a decent highlight here. It feels a bit short, almost as if it could be a companion piece to “Angels” and could be the same song, but it does what it is supposed to do here.

17. Halo
Featuring Brent Faiyaz; Produced by Austin Powerz, Brent Faiyaz, L.3.G.I.O.N., Paperboy Fabe, & Sevn Thomas
Brent Faiyaz is one of those artists people always talk about, but I always ignore him. I am going to check him out more because he does his thing. Another highlight here. Once again, why did it take this long for Meek to get in his pocket here when he can pull off being introspective and reflecting just like the best of them out here.

18. Flamerz Flow
Produced by Dat Boi Squeeze & 30 Roc
I never listened to Meek’s Flamers mixtapes so I wouldn’t know or can tell if this is his “Flamerz Flow” but this could have been left on the cutting room floor. Not bad but after he was three for three on “Angels”, “Cold Hearted III” and “Halo”, why did this have to be here?

HOLD ON WAIT A MINUTE, YALL THOUGHT I WAS FINISHED?!!?!

In all seriousness, this is an album that just can’t seem to get out of autopilot. I had been listening to this album, trying to figure out who is this for? Who would enjoy this? I mean, I know who would and I am most definitely, not in those types of people’s tax bracket, but even then there is just nothing memorable here. Where are the anthems? Where are the hard-hitting bars? Where is the sense of desperation and hunger that we heard early on in his career?

Where is the Meek Mill that showed so much superstar potential on the last album? It just seems like he has become an artist who is rapping just because it’s the job. While other rappers like Lil Baby, Polo G, Lil Durk have crept into his lane and now are passing him by as serving the heads their dose of melodic street anthems, but doing it slightly better than Meek is here. Maybe I am not the audience for this album, but even if I was and knowing what Meek is capable of, it’s too inconsistent and scattershot to say that this is an album that I will remember six months from now. The irony of Meek’s label being called Dreamchasers because Meek’s chased his dreams and now he’s living them. Too bad the music had to suffer in the process.