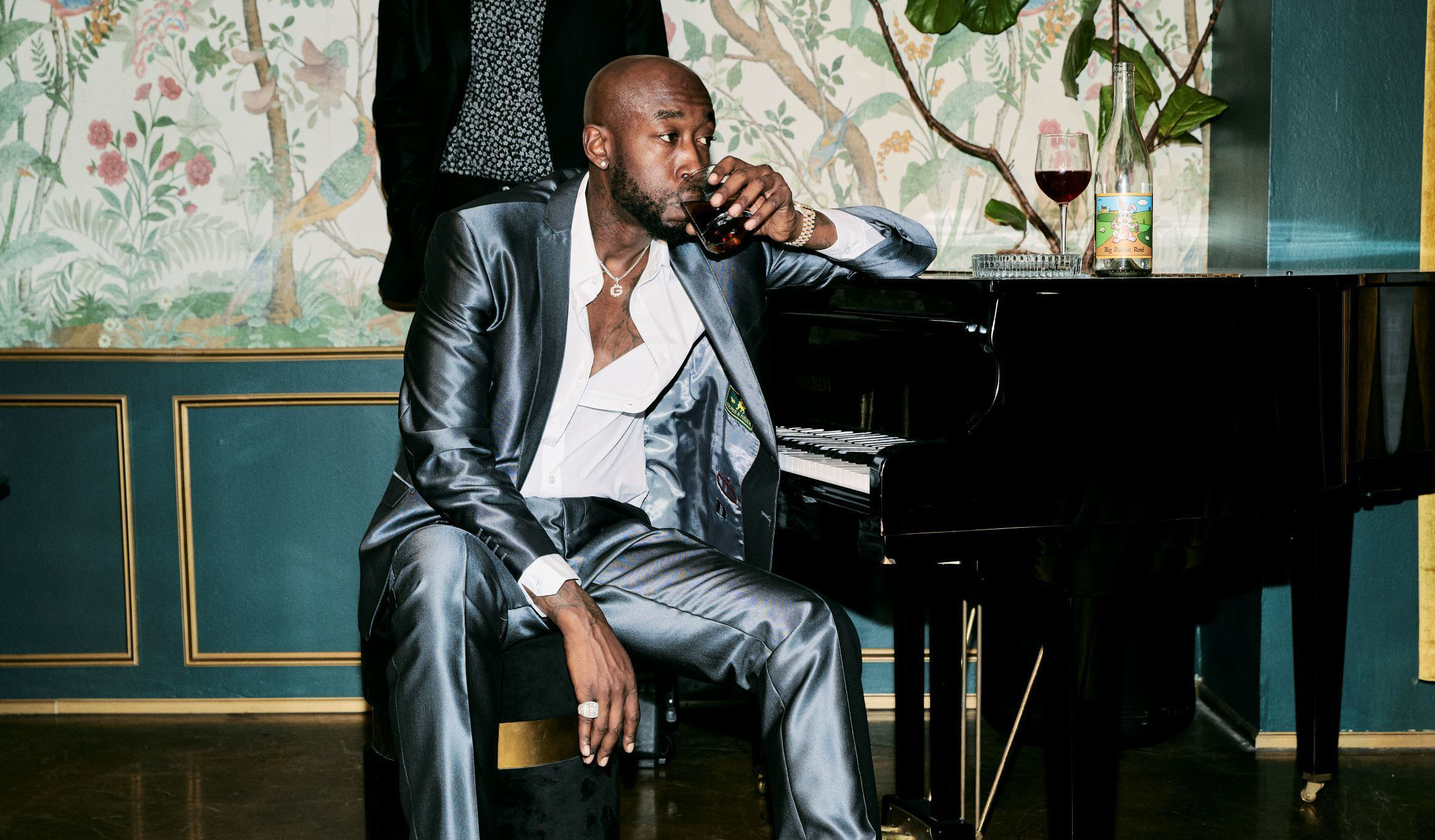 So, hopefully, in the next few weeks, I can get to at least one of these albums, and I will have something to talk about. But for now, we are going to start with Freddie Gibbs. This man honestly has been on a roll since Bandana (w/Madlib) dropped in 2019 and Alfredo (w/The Alchemist) in 2020, establishing himself as one of Hip-Hop’s premier spitters. Also in that time, he has landed numerous acting gigs, high-profile interviews, and co-signs and gained numerous enemies in Jim Jones and Benny The Butcher. It’s been two years since his last full-length. What lies ahead? Let’s see with his latest album, $oul $old $eparately.

1. Couldn’t Be Done
Featuring Kelly Price; Produced by Super Miles & Swoope
Usually, the victory lap is saved for the end of the record, but here at the start of the album, this is his “congratulations” to himself. With a charisma, humor, and flow that is unmatched by anyone else at the moment, Freddie gives the middle finger to all his haters, and to his competition, he’s “Little Brothering” them now. I cackled at the Dr. Umar shot before Kelly Price came to take us to church. A song I wasn’t really feeling like that with the first couple of listens, but it’s a highlight now.

2. Blackest In the Room
Produced by The Alchemist
I’m hungry for some Alfredo, how about you? Akin to their 2020 effort, Freddie paints the picture while Alchemist sets the scene with a luxurious backdrop of pianos and horns that transforms into a low-key street knocker. Fuck around and find out, fuck around and get found slump. Dropping off like Bizzy and Juicy, he fucks these verses up. Freddie is on point here.

3. Pain & Strife
Featuring Offset Produced by Sevn Thomas & Fraka
That Bone Thugs interpolation that leads into his verse reminds me, he’s still a Midwest negro at heart. Indiana and Ohio they neighbors right? Offset… just seems to be here. If Freddie weren’t here, I would have just mistaken it as an Offset solo track or a Migos demo. It is what it is. Average at best.

4. Zipper Bagz
Produced by KAYTRANADA
Not Freddie and KAYTRANADA’s first go-round, but outside of the production and Freddie’s flow, there really isn’t much here. Would’ve loved to hear a better verse on this one but we got what we got. It’s passable. If it came on in the background, I wouldn’t turn it off, but this could have been better given who is involved.

5. Too Much
Featuring Moneybagg Yo; Produced by IV Beatss, Norva “VA” Denton, Edgar “Johnny Velvet” Etienne, & Harmony Samuel
If you listen carefully you can hear Debarge’s “All This Love.” Right at the beginning, Freddie is relentless with his flow. Moneybagg suffers from the similar issue with Offset’s feature, he doesn’t really add anything here that Freddie didn’t master already earlier. It is a good thing that I didn’t listen to this right away, because if I had, my expectations may have lowered for this album.

6. Lobster Omelette
Featuring Rick Ross; Produced by Jake One
Jake One comes through with a heater and Kane and Rozay pick up where they left off with their “Scottie Beam” and “Ice Cream” collabs. It’s exactly what you expect when these two link up, street raps, luxury sounds, and these two are the best at what they do. I’m liking this.

7. Space Rabbit
Produced by Jahaan Sweet, Boi-1da, & Rogét Chahayed
Freddie once again is relentless with his flow and seems to be reminiscing on whether his decisions in the street life will come back to haunt him in the future. Even admitting he wanted to sign with G-Unit. If they were still around. He’d probably be a good fit. Best song so far.

8. Feel No Pain
Featuring Raekwon & Anderson .Paak; Produced by Anderson .Paak, J.LBS, & Thomas Brenneck
I’m on the fence with this one. The hook is kind of throwing me off with the whole “chief counselor, co-founder” mumbo jumbo from Anderson .Paak. Like I didn’t really get into the song until the Chef came through. The song is fine, but it has the opposite effect of the first track where I’m not as hype on this one as I was on the first listen.

9. Rabbit Vision
Produced by J.U.S.T.I.C.E. League
When you hear the J.U.S.T.I.C.E. League tag, you know you about to get something. Freddie gets in his introspective bag as he recalls squashing his beef with Gucci Mane’s greatest opp and making his block the hottest in Gary since 2300 Jackson Street. Dopeness throughout this song.

10. PYS
Featuring & Produced by DJ Paul
Nothing like that old Three 6 sound reminding me of sitting on my porch watching cars go by blasting this type of music out the speakers. I could’ve done without the DJ Paul verse, but it doesn’t bother me that much. Smooth production, Gibbs flow and charisma oozes throughout. Another highlight.

11. Dark Hearted
Produced by James Blake
Freddie going back into his introspective bag. And this is Freddie’s wheelhouse, where he can be a storyteller yet still make it melodic and have it sound easy to follow. Deep street tales that make ya head knock here. Dope.

12. Gold Rings
Featuring Pusha T; Produced by Sevn Thomas, Sean Momberger, & Jahaan Sweet
Surprised Kane and Pusha ain’t done more tracks together. Say what you will about Pusha and his content, he is a master at this and folks like Freddie are his predecessors. More collabs from these two.

13. Grandma’s Stove
Featuring Musiq Soulchild; Produced by Sevn Thomas & Neenyo
This may be my favorite song off this album. This beat just got me sitting back and taking all the words in. Freddie waxes poetic on the rap game, the drug game and one wrong move can set you back. The third verse hits me talking about his dad battling cancer and I almost felt like the last line was a subtle jab toward the rappers he’s been beefing with lately. But that’s another story.

Being the last track is a bonus track, this feels more like the end here. This is the victory lap. From being an underground come-up story to being nominated for a Grammy, he’s here and he ain’t going nowhere. The streak continues.

15. Decoded
Featuring Scarface; Produced by DJ Dahi
The star of the show is Brad Jordan. It’s like an OG passing the torch here. His words at the end of his verse is a telling tale that, unfortunately, none of these kids will listen to. And this is where the album ends.

Freddie knows Julian… I don’t know who the fuck this is.

So, let’s get this straight, $oul $old $eparately is a dope album. The last five, maybe six songs are examples of when Freddie can get in his bag and give us the street tales that we’ve come to know him for over production that while not unorthodox but intriguing enough to see where he takes it.

It’s a shame that the singles that preceded this album like “Gang Signs” and “Big Boss Rabbit” are not here because the songs where Kane puts his trap hat on, they sound like watered-down efforts from the people that are featured here. “Pain and Strife” sound no different than something you’d expect from Offset or any one of the Migos. “Too Much” sounds like something you’d get from Moneybagg Yo. Kane unfortunately doesn’t add anything to do them, and it comes off as generic as any song from them can quite be. That being said, there is a fair balance of tracks where it’s the Freddie that we’ve come to look out for and the Freddie that knows he has leveled up and is trying to cater to the people that may not know him.

So, while this is not album of the year, in my opinion, it is still a very solid album from a man where in the last decade I’ve listened to him, has yet to miss… and probably never will.