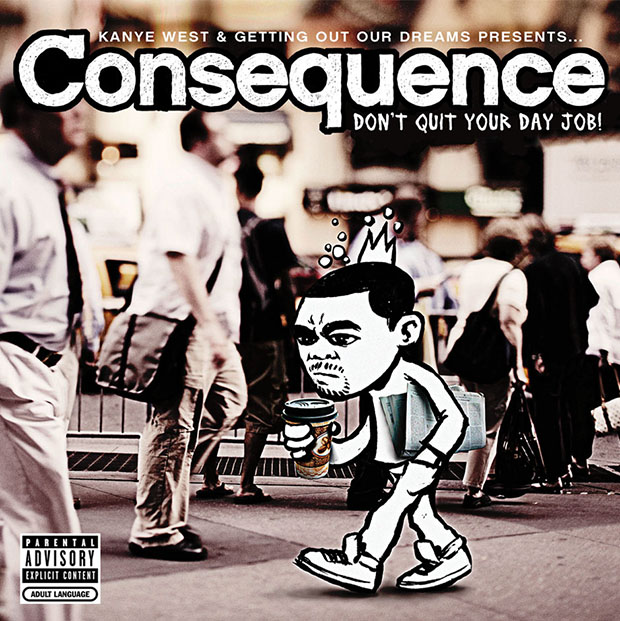 Damn, I’m happy Consequence finally got to come out with an official album debut. This guy has been waiting in the wings for a minute. The first time I heard him was on A Tribe Called Quest’s album Beats, Rhymes, and Life in 1996 (I heard later that he was Q-Tip’s cousin). After that, on the commercial front, shit was quiet for Consequence (or Cons) for a few years. Cons hit the mixtape scene around 2002, and then reemerged on Kanye West’s The College Dropout (“Spaceship”) in 2004. He recorded more songs with Kanye and it was around this time that he officially signed with Kanye’s label GOOD Music. This was a great thing for Consequence; he was among John Legend and Common, and he could look for Kanye for the production. Another reason this was a good look was because Cons was not you average gangsta/thug type of rapper; just like Kanye and Common, he was spitting from the perspective of your average American black man. So after being in the game for over ten years, does Consequence’s debut album deliver?

First off, I noticed that Kanye only produced three tracks off the album. Only one of those songs is actually new. The intro of the album (“Job Song”) is funny. The beat samples “Nautilus” by Bob James (9th Wonder also used this sample for “Murray’s Revenge”) and talks about being a rapper, a known rapper, but still having to get a nine to five. The song wins because it fits into the album’s theme. “Don’t Forget ‘Em” shows Consequence at his best with Kanye providing him with a great backdrop to tell dudes that when he makes it, he won’t forget them. “Night Night” has him talking a little greasy about his knuckle game. The beat on this one is too simple and he doesn’t sound right rapping about scrapping. Cons’ obligatory “for the ladies” songs, “Pretty Little Sexy Mama” and “Feel This Way” sounds forced. John Legend is featured on the latter, but he sounds uninspired. GOOD Music label mates, Gangsta L Crisis & Really Doe make a worthy appearance on “Disperse”. The first official single (and video), “Callin’ Me”, is a club song that doesn’t do anything special and wouldn’t make me go buy the album. “Grammy Family”, “Uptown”, & “The Good, The Bad, The Ugly” would of made the album better if I hadn’t heard them somewhere else first. “Grammy Family” was on DJ Khaled’s Listennn… The Album, “Uptown” was on DJ Clue’s The Professional, Pt. 3, and “The Good, The Bad, The Ugly” has been on numerous mixtapes since 2004. The rest of the album is basically okay I guess. It’s kinda short; out of 15 tracks, it has 4 skits. Another problem with album is that the beats, while not bad, do start to sound redundant. If I was listening in the car, I’m sure some of the songs would run together.

Bottom Line:
Is the album bad? No; if I was Consequence, I wouldn’t be ashamed at all. Should we expect more from GOOD Music? Yes; if you call yourself “The Grammy Family” and talk about changing music, you probably should make sure each release is given proper attention. I actually hope they push this album back. I barely have heard anything about it in the press and it might end Consequence’s career due to low first week sales. This will probably end Kanye’s streak of putting out commercially successful projects too. But in the end, I guess you can be happy that Consequence might have to quit his day job…or maybe not.