Consequence – “Everybody Told Me 2 (Straighten It Out)” 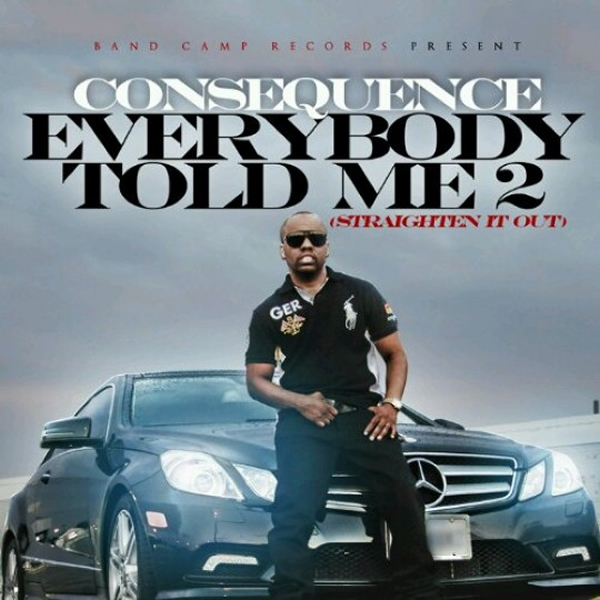 Yeah, Consequence is still throwing rocks at Kanye & G.O.O.D. Music. And yeah, still nobody really cares. I honestly think that after “Man Purses”, Cons should have just left it alone. That way, he would have got this whole situation off his chest without sounding o bitter. But this past week alone he put out “The Plagiarist Society” then that “Puppet Masters” video, and now “Everybody Told Me 2 (Straighten It Out)”.

This morning Consequence called into WGCI’s The Morning Riot to address a few things. Some of the things Cons said had me scratching my head.

Consequence being “The most talked about commodity in Hip-Hop”

“As it stands right now I’m the most talked about commodity in hip-hop and I’m a go out and say it I’m probably the best pure lyricist in hip-hop and in music right now. And among the elite song writers in the game. Let’s be crystal clear about it. And I’m going to prove this by releasing the biggest blockbuster of the summer in the form of Movies on Demand 3.”

Huh? Okay. What about Pusha T (Who was on the same radio station the day before) and that diss track “The Plagiarist Society”?

“[Pusha] lyrically cannot compete and that’s the reason for the extra smoke & mirrors and the attempt at discrediting, Cons told WGCI. “You guys have a song in rotation that disproves everything he says. He said “Yo there’s nobody checking for me. I’ma tell you who’s checking for me Chicago, Beyonce’s checking for me.”

Let me tell you why Kanye West has never said anything to [Pusha] regarding our situation… because he’s a worker. He was jet fuel for Pharrell Williams and he’ll be jet fuel for Kanye West. He’s a live body. I said in “The Plagiarist Society” you ain’t nothing but a body shield, you’re jet fuel.”

Hold up a sec? King B is checking for Consequence?

“You know to know why Beyonce’s checking for me? If you have the full album and you listen to song 5, it’s a record called “Party.” I’m performing the chorus on “Party,” and I also had a hand in co-producing “Party,” so I want Chicago to understand clearly, if you’re saying Beyonce Knowles Carter is a nobody then you’re disrespectful and you’re misinformed, and you’re disrespecting her fans by questioning her taste level.”

Oh. I see what you did there. That was kinda weak Cons. You probably gonna bring up Jay-Z name too. Seriously? What the fuck does Jay-Z have to do with this?

“This quote, unquote “campaign of terror” is going to continue until Jay-Z intervenes. When Jay-Z and Consequence have a gentlemen conversation this may come to an end.

So after all that build up, Consequence premiered his new diss track “Everybody Told Me 2 (Straighten It Out)” and like I figured, it was a pretty weak diss track (I do like the beat though). The crazy thing about this though, you know Kanye is NEVER gonna acknowledge dude and this whole “beef” Cons has with him and G.O.O.D. Music.