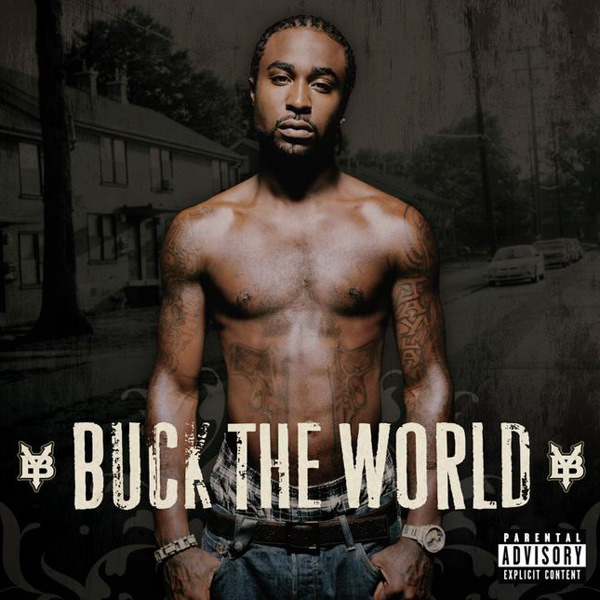 Young Buck returns after a three year hiatus to hit the masses with the latest G-Unit installment, Buck the World. His first album, Straight Outta Cashville, went platinum and gave G-Unit a southern pass. Not being a big YB fan, I wonder can he win over fans like me that usually don’t check for the boy from Cashville, Ten-a-key.

The album starts off with “Push ‘Em Back”, sounds like a club song, has a rowdy hook, surely to have the boys and girls throwing bows in the club when this one comes on. “Say It To My Face” features some Southern royalty on it. Bun-B and Eightball & MJG join the G-Unit soldier on this one. The track is okay, but it seems with all of the heavyweights on the track, it should’ve been better. The hook is lackluster, and Buck holds his on the track. “Buss Yo Head” follows and the hook sounds a bit elementary, obviously Curtis let these boys do their own hooks on this album. The beat was hot, Buck just didn’t deliver…SKIP! Trick Daddy and Snoop appear on the next track “I Ain’t Fuckin With U”. I am going to be honest, Snoop, I AIN’T FUCKIN WITH YOU! Buck and Trick did their thing on this one! The song was straight until Snoop messed it up. Now “Get Buck” is that FIRE! The beat is bangin’, definitely a club banger. I guarantee you will hear this one this summer! The title track is next “Buck the World”, Lyfe sings the hook for Buck and Buck delivers a solid performance. Check for this one. “Slow Ya Roll” is next and Buck talks to the youth on this one. I think it’s kinda of funny when gangster rappers try to enlighten the public. The vocals in the song are annoying and shouldn’t have been there. Finally Curtis shows up for “Hold On”, he does the hook and it sounds like something he wrote years ago. He spits a verse and it sounds like typical Fiddy. Nothing major just Curtis and Buck on the track. “Pocket Full of Paper” features Young Jeezy, so you already know what it is. Coke references out the ass, how many ways I can whip it up, how many of them thangs I can move. If this is what you like then here is one for you. SKIP! “Haters” featuring Kokane should have been left on the floor…SKIP! Buck puts out one for the ladies, “U Ain’t Going Nowhere” featuring Latoyia Williams, whoever she is, and the song sucks! SKIP! The next track is one for the traps, “Money Good” is one that will be a hood banger. I like this one! “Puff Puff Pass” is a song dedicated to one of Buck’s favorite hobbies: SMOKING! The song is okay, even though the hook is kinda of simple. “Clean Up Man” is next and Buck says he’s batting in A-Rod’s spot and is going to stop the downward spiral of G-Unit. The song is alright, worth checking out. “4 Kings” is next, and T.I., Jeezy, Pimp C, and Buck rip the Jazze Pha track. I can’t believe Jazze made this beat. Don’t worry this time the heavyweights delivered on this one. BANGER!! “I Know You Want Me”follows one of the hardest songs on the album, and it’s a disappointment. I guess you can call this a thug’s love song. I call it FILLER! SKIP! “Lose My Mind” is the last track on the album and Buck is screaming on the track and losing his mind for real! This was a real gamble for Buck, he was taking a risk, I like the idea, but I don’t think he pulled it off. He did something that you would expect from Eminem. I’m not mad at him though. After that “The Funeral” makes its way onto Buck’s album and Curtis delivers a strike at Cam, but this ain’t about Buck, just something to make the kids in Iowa buy this album.

Bottom Line:
Overall this album didn’t make me a Young Buck fan; it just reaffirmed my suspicion that he is a marginal rapper that can shine from time to time. I liked him on a couple of songs on the album, but some of the other songs had me wanting to press fast forward immediately. I guess some of his fans will like this. I just don’t see this as being that album that resurrects G-Unit, maybe keeping it afloat until Curtis drops in the summer.