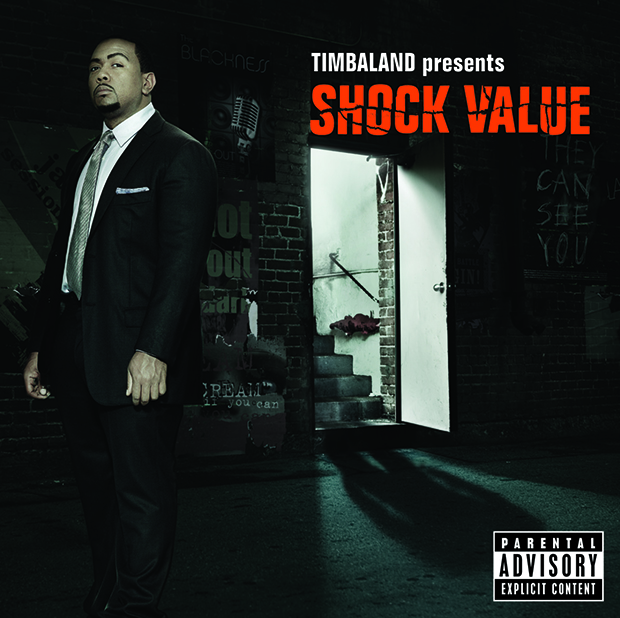 Timbaland once said in an interview that he was tired of producing Rap and that he was gonna other genres of music like Pop or Rock. In 2006 Tim did do a lot of Pop and went on to produce a slew of hits for Omarion, The Pussycat Dolls, Nelly Furtado (who is signed to his label Mosley Music), & of course Justin Timberlake, among others. Now after being featured on most the songs he produces lately, Timbaland wants to take center stage with his second solo album, Timbaland Presents: Shock Value. The shock value here is that the album isn’t that good. Don’t get me wrong, Timbaland is a great producer, but most of his album (especially the ones with Magoo) just don’t live up to expectations.

The album starts of with “Oh Timbaland”, his only solo song on the album. The beat sounds like vintage Timbaland but it quickly goes down when he starts rapping. Why does Tim continue to rap? No matter who ghostwrites (Former Beat Club rapper Attitude does it this time), Timbaland delivery sucks. Next up is the first single, “Give It To Me” featuring Justin Timberlake & Nelly Furtado. Oh, I see what you doing now Timothy Z. Mosley. You thought if you went and got some big name pop acts, your album would sell. Naw, this song sucks too and it didn’t get that much buzz. At least make it look like this shit wasn’t manufactured. You could replace Nelly and Justin with Ginuwine and Missy, and it would sound like some shit you did in 1997. The beat on “Release” (also featuring Justin Timberlake) sounds too much like “SexyBack” and probably came from the FutureSex/LoveSounds sessions. Timbaland shows off more of his Mosley Music rosters with “Way I Are” which features Keri Hilson & D.O.E.. The song could be played in any club in San Francisco…if you know what I mean; a little too simple and a little too techno. I thought Tim was gonna pull out the good beats when I saw that Missy Elliott and Dr. Dre was featured on “Bounce”. But when I heard the beat I thought that maybe Timbaland was recycling his beats; I swear I already heard this beat already. Dr. Dre sounds out of place (“like a Chinese, like Som Yong Hoe”) and the Timberlake hook is garbage. “Come & Get Me” wasn’t bad at all. It features 50 Cent and Yayo on a straight forward G-Unit/Dr. Dre sounding track. Timbaland gangsta talking could have been left off though. “Kill Yourself” had a good beat but it features Sebastian and Attitude. The hook is okay but no one on the track can rap (Attitude wasn’t that bad). I think this song could be taken as a diss song to Scott Storch. “Boardmeeting” has Tim reuniting with Magoo (Is Magoo blackmailing Timbaland? That dude can barely rap!) The beat wasn’t that bad and to my surprise, Magoo actually does well on the track. The next track is “Fantasy” featuring Money. I don’t know who this chick Money is, but her and the song sound too much like Ciara’s “Promise”. Timbaland calls in head Pussycat Doll Nicole Scherzinger to sing on “Scream”. By now, all these songs are starting to sound like one big one. To me it sounds like album filler from The Pussycat Dolls’ album. “Miscommunication” has a nice beat and isn’t a bad song; it has an old school feel. That’s good and bad because Timabaland didn’t produce this song (His prodigy Danja did). Come on Tim, you can’t let your little man upstage you. Sebastian is also on this song; he’s not much of a rapper but he is also Timbaland’s little brother so you know how he got on. “Bombay” is different in that it features Amar who sings all her parts in Hindi. I thought that trend was over but at least it’s different. The rest of the album is mostly devoted to featuring rock bands. I’m not big into rock; I like Radiohead and some old Beatles; but I’m not gonna front like I’m an expert. The Hives appear on “Throw It On Me”, She Wants Revenge is featured on “Time”, Fall Out Boy appears “One & Only”, and One Republic show up on “Apologize”. Personally, I really didn’t like any of the songs; my girl liked “Apologize”, you can check them out for yourself. I think Timbaland was just doing something to get some rock/alternative fans; I don’t even think he’s feeling any of these bands (Maybe One Republic, they’re signed to his label). The last song (fuck the bonus tracks) is “2 Man Show” and features Elton John. It surprised me that Tim actually got Sir Elton John on the album; but then I noticed that all he does is play the piano on the song. The song is good background music because it only has a choir singing. Timbaland takes away from this by talking and adlibbing through most of it.

Bottom Line:
The next time Timbaland wants to do an album, he might wanna go the Quincy Jones route and not sing or rap on it. This album tries too hard and the beats do not live up to Timbaland’s past production work. I don’t know where to categorize this album, but I do know that it sucks. Yo Tim, stick to producing behind the scenes man. Do what you best at, you killing your legacy.

nappy Picks: “Miscommunication” & “Come & Get Me”