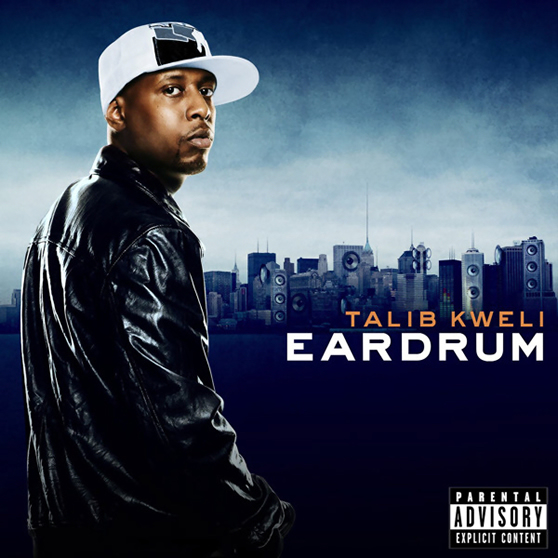 “If skills sold truth be told, I’d probably be lyrically Talib Kweli”. Jay-Z said that line on “Moment Of Clarity” in 2003. To me that signified that Talib was finally getting some respect. That a great year for Talib. He was getting praise for his debut solo album Quality and buzz for his upcoming album The Beautiful Struggle. He also made high profiled appearances on Chappelle’s Show. Shit, even 50 Cent called Talib his favorite rapper in an issue of XXL; he was ready to blow up. Then he released The Beautiful Struggle. While the album wasn’t bad, it didn’t live up to his Quality standards. Did Talib miss his chance? Naw, dude still grinding. He now has his new label Blacksmith Music. Has been seen on Wild ’N Out and Dave Chappelle’s Block Party as well as collaborations with Kanye West and Dilated Peoples, to name a few. He also was the voice of the protagonist for Marc Eckō’s Getting Up: Contents Under Pressure. With all that said, this might be Talib’s biggest album to date. Let’s see if it sounds good.

The album starts with “Everyday Man”. After poetry about Kweli’s rhyme talent, Talib then comes on and says “They say you can’t please everybody”. The actual track starts and Talib shows his talent over a soulful Madlib produced track. A good start. Talib jumps right into things on the next track “NY Weather Report”. Its mid tempo tracks like this that really suits Kweli as he spits about the climate of New York. The Just Blaze produced “Hostile Gospel Pt. 1” will remind you of “Get By” or “I Try”…which is not a bad thing. The choir and piano sounds epic as Talib spits the truth; “I call these rappers baby seals cause the club you to death, I can call them Navy Seals cause they government feds”. Jean Grae shows up on the Will.I.Am produced “Say Something”. Even though I didn’t love the beat, I understand it was made for them to just straight rhyme (Side note: Jean Grae might be the best female MC right now. It been said before but I had to say it too.) UGK and Talib continue their unlikely partnership with “Country Cousins”. At first, I didn’t think they would mesh, but once again they prove me wrong (Like they did on UGK’s latest). The legendary Pete Rock produces the next song “Holy Moly”. It’s not bad, just not one of Pete’s best. Also, it’s only like two minutes so I never really go into it. The sample and beat on the Madlib produced “Eat To Live” is hot as Talib raps about kids starving among other things (Can a song be hot when the subject matter is this serious?). The next song “In the Mood” features Kanye West (Who is also the producer of the track). Even though I like the song, it was average. I expected more since these two have produced classics in the past. The slow beat of the Norah Jones featured “Soon The New Day” gives Talib room to talk about the promiscuous lifestyle. This collaboration turned out a lot better than I predicted. Lyfe Jennings and Coi Mattison do the hook and harmonization on “Give ‘Em Hell”. Talib goes deep as he questions Christianity and other religions; “So it all sounds the same to me, when they say ones right and the others wrong, that sound like game to me”. Talib and Hi-Tek link up once again for “More Or Less”. Talib continues to question the world by saying what we need more (More marijuana) and less of (Less coke). The song is good; at lest it’s not another “Back Up Offa Me”. Pete Rock shows up again and produces “Stay Around”. This time the results are better as Talib Kweli talks about what people tell him he should do with his career; “What’s was up with ‘Back Up Offa Me’?, I ain’t like that. Now you should get with Hi-Tek, he got nice tracks”. The next track “Space Fruit” is an interlude and is performed by Sa-Ra. I liked it, but I really saw no point to it. Talib and “The Teacher” KRS-One go back and forth on “The Perfect Beat”. Yea, it’s not some of KRS’s best rhymes (Talib kills him), but it’s good to see Talib paying his respects. Talib gives shine to his seeds on the Musiq Soulchild featured “Oh My Stars”. The DJ Khalil produced song is a touching open letter to his kids. “Listen!!!”, produced by Kwame, ends the official album. Kweli addresses the declining state of quality Hip Hop music on this one. It’s a good song, but maybe I a little tired of it because it was featured on NBA Live 2007. It’s still a good way to end the album. The next three songs are bonus tracks (Even though they’ll be on every album sold). The first is “Go With Us” featuring Strong Arm Steady (Signed to Talib’s Blacksmith Music), is a posse track repping their label. “Hostile Gospel Pt. 2” is the next track. It’s not as good as the original, but is still a good song and worth checking out. The last in the Justin Timberlake featured “The Nature”. Yea, I was scratching my head too. I don’t know if Talib was trying to reach a new audience or what, but I was expecting garbage. Even though Justin and Talib don’t fit together on paper, the song wasn’t as bad a I thought it would be. It was kinda catchy actually.

Bottom Line:
Talib should be proud, he arguably has produced one of the best albums of the year (Okay, it’s not that hard to do in today’s Hip-Hop climate). He stayed true to his self while branching out. Talib is a breath of fresh air because he’s just himself; he doesn’t have to play gangster or player. If you want real Hip-Hop, you gotta pick this up.