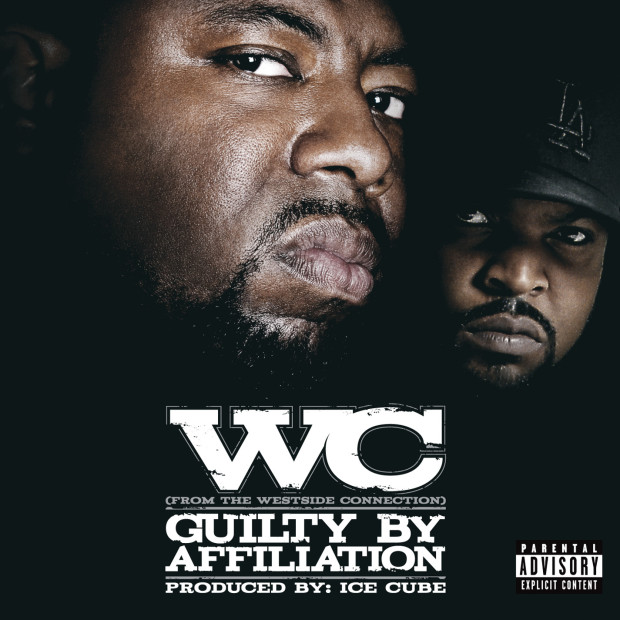 WC (pronounced “Dub-C”) hasn’t always gotten his due. Yea, he has the respect from his Hip-Hop peers, but after doing Rap music for almost 20 years, you’d think he’d have achieved more. Beside being a part of Westside Connection, being on Def Jam video games, and popularizing the “C-Walk” (You know you remember WC doing the dance in the Korn video), he really never musically had the kind of success of a Ice Cube or even a Mack 10. But, not garnering this kind of success does achieve one thing: It keeps your ass hungry. Now with the independent success of Ice Cube’s 2006 Laugh Now, Cry Later (An album that surprisingly went to sell way beyond Gold status), WC now returns on Lench Mob Records to release his third solo album Guilty By Affiliation.

The album begins with the Jelly Rolled produced sinister first single “This Is Los Angeles”. The quality of production surprised me; it had a nice hook and Dr. Dre like keys that provided a good intro to the album. WC gets even more Cali on The Game assisted “West Coast Voodoo”. Not to be out done by Game, WC goes hard, “Can’t nobody serve it like I serve it, got em shaking like Michael J. Fox, these niggas looking nervous”. This song also has the trademark West Coast pianos and is produced by Teak & Dre (They also so handle 6 of the 14 tracks on the album). The horns on the Nottz produced “Jack & The Bean Stalk” sound ominous and fits WC’s style. The hook was weird but WC saves it when he spits “I’m harder that Michael Jackson’s dick in a daycare”. California will definitely love the ridin’ Mr. Porter produced “Paranoid”. Ice Cube is listed as featured because he does the hook, but don’t be surprised to hear him in the background on most of the album (He is on the cover after all). This song also provides the funniest line on the album: “Like Fantasia without no make up on, on the mic, I’m a ugly ass sight”. The title track “Guilty By Association” is a cook out party starter that explains why he can’t leave his hood ways. Snoop Dogg and Butch Cassidy join WC on “Dodgeball”. While I didn’t hate this song, I wasn’t in love with it either; the hook is kinda boring. “Keep It 100” is an average song but fits the album perfectly and has WC explaining why he’s gotta stay true. On “Crazy Toones 4 President”, WC does something I haven’t seen in a minute, he shows love to his DJ Crazy Toones and gives him a whole track to do his thing. Even though he is WC’s younger brother, that’s still Hip-Hop. “If You See A Bad Bitch” has WC getting at hoes over a Timbaland sounding beat. While this is not a bad track, its kinda gets sad when you remember WC is almost 40 and he’s still approaching women like he’s Young Jeezy in the club or something. The hyper Rick Rock produced “Look At Me” continues this and it’s wonder why they would put these two songs together. Then you notice “Side Dick” is after that. Why would you put three songs about getting at women together? Well, out of the three the Legendary Traxster produced “Side Dick” is the best of the bunch and is more catered to WC’s style. The Ice Cube featured “80’s Babies” has WC going at all the hard heads born in the 80’s. With a hook like “If you was born in the 80’s, I’m probably yo Poppa, because nine times out of ten I fucked ya Momma”. This song reminds me of Jay-Z’s “30 Something” because it doesn’t hide the fact that their older, it praises it. Good song. “Gang Injunctions” is an okay song explaining how it’s hard to dodge pitfalls of the hood in California. The last song on the album “Addicted To It” has WC using his a stop and go style rapping about being addicted to gangsta shit. The beat is average; I just don’t know if it was good way to end the album.

Bottom Line:
This album was a surprise to me. I came thinking it was another washed up rapper on his last leg. WC surprisingly still sounds hungry like its 1998 again. While I’m not talking “Album of the Year” honors here, WC produced a solid album. Even though this album won’t make much noise on the charts it’s still a West Coast banger.