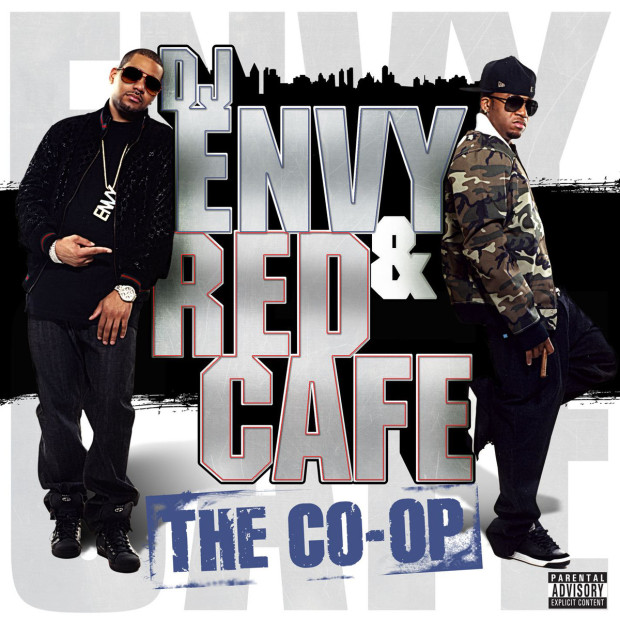 Red Café has been through a lot of labels in his career. First he was down with Trackmasters through Arista, then to J Records, then to Mack 10’s Hoo Bangin’ label, then to my Aunt Janine’s label, Tilted Wig Productions…okay, the last one was fake but you can see how this guy has moved around. Even though I thought he was a 50 Cent clone Trackmasters got because they missed out Curtis Jackson, I think Red Café has some skills. I really liked that single he had out a few years ago, “May I”, and he has ghostwritten before (Ex. Diddy’s part on “Pass The Courvoisier, Pt. 2”). Well now Red has finally gotten signed to one of the rising label in the game right now, Akon’s Konvict Muzik. But before we get to his official debut slated for next year, Red has teamed up with DJ Envy to bring us The Co-Op. Why is DJ Envy there? I don’t know.

The album starts out with “School Of Hard Knocks” and has DJ Envy explaining what The Co-Op means: “You seen The Wire, Red got his crew, Shakedown, I got my crew Block, we came together now we The Co-op.” Okay. After that, a hard slow tempo beat drops and Red Café shows he still good with the gangsta talk, “Got my thing moving little daddy throw in the towel, I’m a murder you motherfuckers then take a bow”. The next track is a skit (“Keeping It 2 Real”) with Michael Shawn playing “MC Death Murder Homicide”, a fake wannabe thug MC. The skit is funny (more on that later), but I don’t think it should have been placed right after the intro. “What It Be Like” has Red Café doing what he does best (talk drugs and guns), over a heavy guitar looped track. I know I’ve said before that I get tired of all the terribly done gangsta bullshit in rap these days, but I still like well done gangsta bullshit too. I like Red because he doesn’t try too hard with his lyrics but yet without sounding simple. This continues on the Remy Ma featured “What It Do”. It’s your basic back and forth “battle of the sexes” song, but once again it’s done pretty well; Remy and Red didn’t mail this one in. The next track is the first single for the album, “Dolla Bill” featuring Fabolous. I’ll be straight with you on this one; I didn’t like this song at all. From the generic sounding synthes, to the questionable Jermaine Dupri vocal sample, it just didn’t grab me. And Fabulous, is it really a feature if you only share the end of a verse and that’s it? If you like this song though, I guess you can try to check out the “dolla Bill” remix featuring Jermaine Dupri, Juelz Santana, Sean Kingston, & Busta Rhymes. The reggae themed “Ghetto Children” featuring Mr. Easy is another one that I couldn’t get into. While it’s not trash, I felt they tried to recreate and failed at what Shyne did years ago with “Bad Boyz”. The next track is another “Keeping It 2 Real” skit with MC Death Murder Homicide. It has the fake MC giving an interview with a magazine and it’s hands down the FUNNIEST skit I heard in the past few years (“Fuck a Christmas tree, I don’t need no gifts motherfucker! Just poking motherfuckers for know reason. Stab you right in your back and I say ‘Merry Christmas, Jingle Bell that nigga’!”) I don’t usually recommend skits but you got to check this one out. Next up is the Uncle Murda and Styles P featured “Move Like A G”. This is song is a case of too much thug talk on one track. It’s not the worst song I’ve heard but at a length of over six minutes, it really doesn’t do much. Red Café gives props to his crew Shakedown, on “Shakedown 4 Life” (before this album, I thought Shakedown was his nickname). The song sounds more like a “reminisce, my homies locked down and dead” type, and because of this, Red Café raps about tasting cocaine and foreign cars doesn’t fit here. Red gets at the ladies on the Nina Sky featured “The Things You Do”. At first I wasn’t feeling it because you get one of these type of songs on every rap album these days, but when I heard the hook it won me over (The hook is from Gina Thompson’s “The Things You Do” featuring Missy Elliott…yea, you remember!). Red Café’s crew finally gets mic time on “Invincible”. The track is your basic up North posse cut (complete with the obligatory girl of the crew). I don’t think I heard too many clever lines being thrown around though either. If a posse cut doesn’t have that, why have it at all? Nice beat though. The next skit is another “Keeping It 2 Real” skit. It’s not as funny as the previous one, but it goes with the theme. “Buck Buck” featuring Sheek Louch is by far the banger of the album. It has a hard beat uses a Kool G Rap sample and showcases a revitalized Sheek (“I don’t shoot sideways like the kids these days, they just going through that 2Pac phase”). This one is sure to be a New York banger. “Section 8” once again has Red’s crew Shakedown riding shotgun. It’s not better than “Invincible” but on par. It’s not that the songs should be skipped or anything, it’s just that I don’t really hear any standouts in that crew other than Red Café. The last song on the album is “Mr. Lover” featuring R&B songstress Black Buddafly. It’s another stab at radio and the ladies again. Other than being a wack way of ending this album, this song sounds like more of Black Buddafly’s songs than Red’s and doesn’t fit on the album at all.

Bottom Line:
I don’t know if I’m surprised that this album isn’t half bad or is it just that I really didn’t expect anything. While it had some missteps (Sequencing and the ending of the album), it had some right moves too (“Buck Buck”). Red Café showed he still has talent and that we should look forward to his solo debut next year. All in all, it’s a better than expected average album.