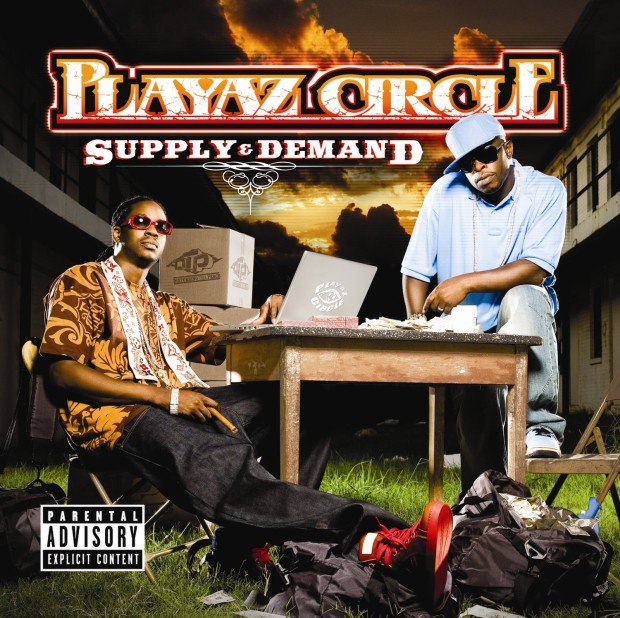 Playaz Circle, consisting of Tity Boi and Dolla Boy, releases Supply & Demand off Disturbing Tha Peace records. The group fell onto bad times when Tity was shot and Dolla incarcerated, Ludacris hearing about their misfortune decided to give the group a deal after taking a liking to them. “Duffle Bag Boy” is hot in the streets right now, the buzz is right for the taking, but can the childhood friends from College Park cash in?

The album starts off with “Dear Mr. LA Reid”, a lot of talking at the beginning of the track, but when it gets to the music, the boys put together a decent song about their trying times as rappers. Not that bad, almost lost me with all of the talking. Next up is “#1 Trap Pick”, and instantly the beat catches you. This one is strictly for the streets. CERTIFIED HOOD CLASSIC! Check for this song in a hood near you! “Duffle Bag Boy” follows and you know what it is, Wayne on the hook and witty lines like “this that salad dressing, I’m on my 1000th island!” Simple, but it hits the mark! BANGER! “Betta Knock”featuring Ludacris is next and the song is on the garbage side. Luda on the hook couldn’t save this song. It was on the boring side. SKIP! “Paper Chaser” is on deck featuring Phonte singing on the hook. Odd you say, but it sounds real good! Check out Tiggalo on this one! This one is real smooth, grown up music. We have a dopeboy anthem with “We Workin’”. I can hear this now beating out of an old school Chevy. For what it is the song is decent. Ludacris makes a second appearance on “U Can Believe It” and this time he puts up a decent effort over a vintage sample. The song is on the good side, definitely worth a listen. “Paint Still Wet” is an average song about how nice of a car that they have, nothing major, just enough to keep this car rolling. Next we have a Rock/Rap collision on “Outlaw”. This song isn’t good at all, they sound out of their comfort zone. They should have left this to someone else. SKIP! “Gucci Bag”, featuring former label mate Shawnna, is for the clubs. Has that Lil’ Jon feel on the production, but don’t be surprised if you find yourself bouncing to this one. The closer on this album is “Let Me Fly” and the hook is horrendous! The message was cool, but how are you going to end like this? Take the CD out right now! I can guarantee this song won’t be on your mp3 player!

Bottom Line:
This album was good for what it was, street lyrics and trunk rattling beats. These guys didn’t reinvent the wheel, but they took it the wheel and put it on the other side of the car. If you like street music then you will like this album. But if you are a backpacker or anything near it, you might want to skip this album and wait for something more fulfilling.