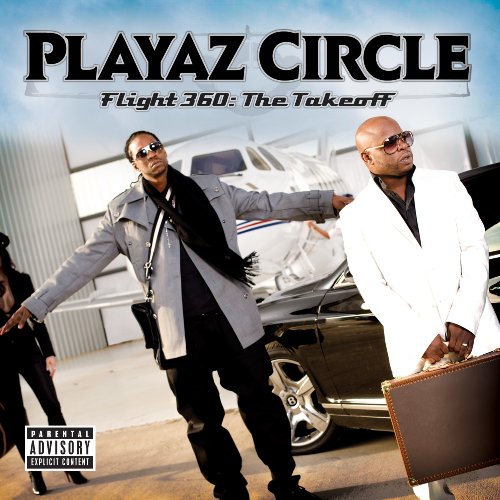 Since I’m the in house Southern reviewer, I thought I would revisit one of the more underrated groups out of Atlanta, Playaz Circle and their second album Flight 360: The Takeoff. Not too much has been heard from the group that bought you “Duffle Bag Boy” back in 2007. That song (accompanied with the buzz of Lil’ Wayne) got them plenty of airtime. We know how fickle Hip-Hop fans are, so will a two year layoff (with A LOT of delays) hurt their chances this time around? Let us see.

Turbulence
The first song off the album has me intrigued to really see what they have in store for the listeners on the rest of the album. Turbulence goes back to the title and it really kicks this album off.

Look What I Got
Featuring Korleone
First off, I love the production on this song along with the chopped and screwed hook. This is a perfect song for them boys that like to stunt. This was on one of Ludacris’ earlier mixtapes (The Preview), I liked it then and I still like it now. DOPE.

Stupid
Featuring OJ Da Juiceman; Produced by Hurt
I’m known for burying OJ, but I think this track would have been better with Gucci, but since his “protégé” is on this song, I’ll go easy. One good thing is that OJ doesn’t overdo it with the “Aye” and his rhymes sound like something I heard before from him, but this isn’t about him, or maybe it is. I like the production and I can see myself getting “stupid” to this when it comes on in the club, or I’m beating it out in the Chevy.

Hold Up
This might be my favorite so far off the album. The song could have used an assist from the late, great Pimp C (RIP), but even without his vocals on the track, the song still goes HARD. The production is slow, simple, and it fits well within the Playaz Circle. DOPENESS!

Yeah We Gettin’ Rich
Featuring Ludacris
The production on this track sounds like a 2002 DipSet track, but this one features three rappers from the South. While Titty Boi and Dolla come out the gate swinging, the Ludameister showed why he is one of those emcees that you might not want to get on a track with.

Can’t Remember
Featuring Bobby Valentino
This is your Hip-Hop/R&B track that has become a standard in the industry. Don’t think that PC went soft on this one. The beat is smooth, and the lyrics are okay, but this just doesn’t do it for me. Not a SKIP, just a question mark for me.

Big Dawg
Featuring Lil’ Wayne; Produced by Wonder
The reunion is back on this track. Weezy returns to lend his vocals on the track (similar to what he did on “Duffle Bag Boy”) and I can’t even front…I like this song. I wonder why Weezy didn’t drop a verse on the song. He used auto tune on the hook (are you surprised?) but it worked well on the track. The production on this one is sick. Shout out to the Wonder for this one.

Quit Flossin
Featuring The Casey Boys of Jagged Edge
This Hip-Hop/R&B track works better for me than the Valentino collab did. I like the hook better than I did the earlier track, but I don’t want to hear “trappers” getting all soft. Again, not a SKIP for me, but another question mark.

Refreshments
Another intro keeping up with the album’s title.

Big Wheel Whippin
This song features a T-Pain knockoff, but he’s just doing the hook. The production on this one is pretty good, and the lyrics are decent, just seems like they are getting on the redundant side. This beat on this one makes up for the average content.

Weight Droppin
Featuring Raekwon; Produced by Wonder
The last time Rae teamed up with an Atlanta duo we got “Royal Flush” and “Skew it on the Bar-B”. This time he kept simple and ended up working well with the Playaz Circle. Once again the production by Wonder stands out to me.

DJ Know Me
Featuring Young Dro
Young Dro? These are the songs that I like to hear from Playaz Circle, they are making songs for their audience; the trap, the club, and the hood superstars. Some artists need to stop trying to appeal to everyone and just attack the target audience. Young Dro reminded us why everybody loves Dro. “Buying my whole click cars like we on the Oprah show!” Even when I had almost wrote him off, he goes and does this.

Ghetto
Featuring Cee-Lo & Sunni Patterson; Produced by LT Moe
Okay, this is my favorite song off the album. HANDS DOWN. Cee-Lo does it for me on this track. The song is just too smooth for me to ignore it. This is a song makes you think of all the wrongs of our society, and when I say “our” I’m referring to the hoods all across the world. FIRE!

Prepare for Landing
The flight is over.

Outta Here
Produced by The Royalty
The last song on the album and Playaz Circle gives you some of the same that they gave you on previous songs. Nothing new to report here…TIME TO GO TO BAGGAGE CLAIM.

Bottom Line:
Playaz Circle came back strong with their second album. I have to think this is a victory for the duo considering the lack of buzz surrounding this project. The collabos on this album all work well with the duo and they seemed to fit together fluidly. They stuck to their guns and did what they knew how to do: make music for the A and the South. I know this album didn’t have the national spotlight like the last one, but for the ones that do get this, they will be satisfied. I would be interested in seeing the guys on more projects in the future, because I like the chemistry that Titty Boi and Dolla have together. (PAUSE)