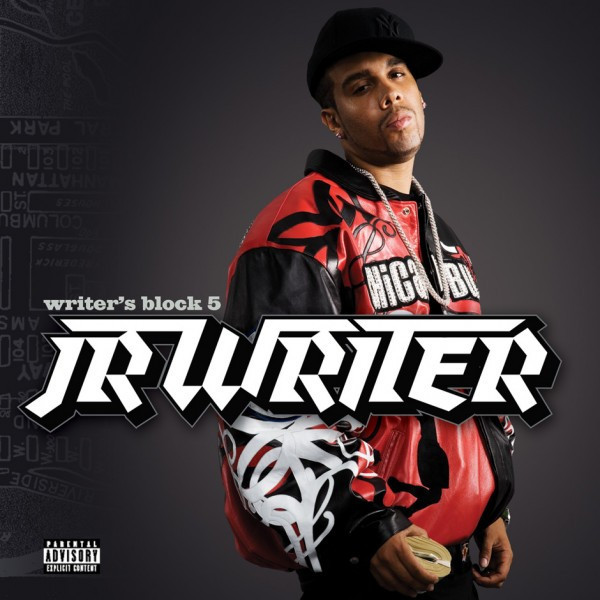 Another day, another Diplomat member releases an album of some sort. Even though Dipset has had some inner strife as of late, it doesn’t seem to have slowed down their album releases. This year alone the Dips have released six official albums (We reviewed albums from Hell Rell, 40 Cal., Freekey Zekey, & DukeDaGod); and don’t even get me started on the mixtape scene. Well, today we are checking out JR Writer’s new one Writer’s Block 5. Now the question we had here at nappyafro.com; is this an official release or a mixtape? Well, it’s supposedly in stores right now and there are iTunes ads for it, so I guess so; it’s his debut Babygrande Records. Another question? Okay, you in the back with the baby blue suit. Has B-Easy ever listened to any of the Writer’s Block series? No. Has B-Easy ever listened to any of JR Writer’s albums (This IS his second “official” album after 2006’s flop History in the Making)? No. But come on, I know who the dude is! I mean, he has been bigged up by Cam’ron for a second. I think he has some talent. As a matter of fact, I think his voice sounds just like Cam’s with more talent. So with that weird exchange out the way let’s check out Writer’s Block 5.

The album starts with the obligatory “Intro” track complete with “This sound like some Rock music right here” line. Even though you may feel like you heard it before, the track is not bad as JR shows his wordplay; “Try and get his records shopped, it’s like throwing his album in space, it ain’t gonna never drop.” “Major” is up next and it follows the Dipset blueprint that they never threw away after Cam’ron’s “Get ‘Em Girls”. Clocking in at 1:29 minutes, it has me wondering why is this the second track on the album? “Got It Covered” featuring Fred Money is another cut that suffers from sounding like it’s from a mixtape. Not really no point; just rhyming about what he already covered in the previous songs. The old school feel of “We Getting’ It A Baby” is a welcomed change as JR Writer gets some inspiration from LL Cool J’s “Jingling Baby”. “They Don’t Really Want It” is another song highlighted by the anthem like beat that gives Writer room to talk tough; “Listen youngn’ I can bet you can fit in this trunk, swear I’m running out of breath how I pick up the pump.” JR Writer tries to go for the down South with “Heavy Jewelz” (complete with a chopped up chorus), but for some reason I think the beat would service Rick Ross or T.I. better. “Dear Hip-Hop” has JR more in his element; but it suffers from him not staying on subject (A problem a lot of rappers have these days). Time to get at the ladies now right? Every rapper does it. JR Writer attempts to do this on “Make A Move” and gets help from R&B singer…Slim of 112? Yeah, it sounds like you think it would sound. SKIP! “Beast Mode” is probably the hardest of the entire album (Maybe it’s just that I think the name is hard. Beast Wars or Altered Beast; take your pick.). The beat on this is raw and has JR spitting as such; “I’m so piff I could put my grammar in a slab, a couple bags have them fiends dancing on the ave.” “Where You At” is up next; the beat is okay but it’s sounds like the intro and suffers from a weak hook. “You Ain’t Know” is another track that running time is around 1:30. Plus, I starting to think JR can’t really rap about anything but guns, money, drugs, and women; so-so track. JR rebounds with the next “Runner” by using Road Runner sound effects in the beat. It’s surprisingly creative and a nice alteration. “Don P (Phone Call From Jail)” is an interlude that has JR conversing over the phone with an incarcerated Don P. I understand you gotta give your locked up homie some shine but damn, this shit goes on for almost five minutes. The last track “What A Thug About” sounds the most un-mixtape of the whole album. The song as a whole is average at best, but I guess he had to save the real sounding stuff for the end.

Bottom Line:
After listening to this album, I’m convinced that this is a mixtape trying to be an official album. There’s not much here if you looking for real, well crafted songs. But on the flip side, it’s not that bad either. While it won’t get my vote for album of the year (or album of the week for that matter), the songs that are mentionable are actually good. If you like freestyles and straight rhyming just to rhyme; you might like this. Then again, why would any go into the store and buy part five in a series of mixtapes when you can the previous ones have been available in the streets?