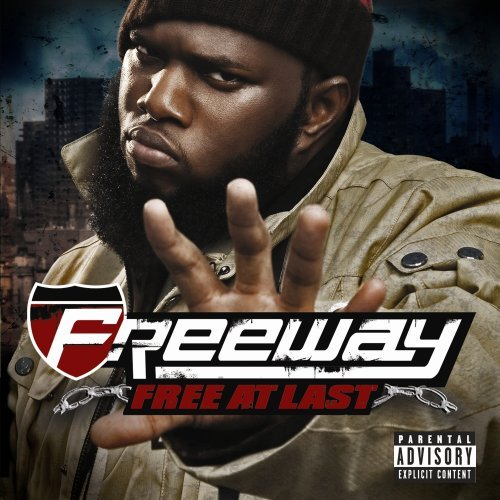 How many rappers truly step to the mic and sound like the next great thing. I am not talking about clever puns or simple voice quality, I am talking about the entire package. Freeway had the look, the bravado, the voice, the flows, and the energy that is required to make your mark. His debut is a hood classic, but then he vanished. Apparently, folks been runnin’ dey mouths and Freeway has a chip on his shoulder.

“This Can’t Be Real” Some shit just goes together and you can’t explain it. Salty and sweet, Hennesy and Coke, and now we have Freeway and Marsha Ambrosia (yes, .5 of Floetry). I don’t know if this track could be ANY better. I will try not to say too much, but Free is talkin’ shit too. One of the best tracks on the album.

“It’s Over” Let’s talk drama shall we? The horns, the beat, the tempo, this shit is what Rocky’s montages were made of. First Jay and Dame break up now everyday I wake u/ somebody got a prollem with Free . Obviously shootin’ back at folks who looked screwfaced at him with G-Unit Pres. Fiddy. Yeah, this shit is an asnwer and a challenge.

“Still Got Love” SHIT, I am smiling as I listen to another beast of a track. This had to be a hand picked Jigga beat because I can see him lacing this one as well. Insane production.

“Roc-A-Fella Billionaires (feat. HOV)” I think this was the single most played song on every mixtape this year. Even more amazing is that it was NEVER remixed or touched on any record I saw. The wordplay with Free and Hov is insane. I’m sure you have heard it, so I will stop here….bigspenderrrrrrrrrrrrrrr.

“When They Remember” OMG….man look. My neck hurts. This shit is so insane, I smiled when it came on. I can’t even type about this shit. My favorite song on the album.

“Take It To The Top (feat. 50 Cent)” A song to the ladies, but its not FOR the ladies. I hope you follow me. Song is nice, even with fiddy sangin the hooks, no he doesn’t’ rap. Long as you whippin’ the Rolls / U ain’t gotta strip on / So what the fuck should you care / just cause I live on the road. Typing this really lacks the impact of his delivery, but the shit is fly.

“Spit That Shit” Another nice track, but one has to be less than perfect. This one may be it. I don’t have anything bad to say about it, it just seems a little out of place with the rest of the album. Still a nice one though.

“Reppin’ The Streets” Free gets his story tellin’ on. More like a heartfelt hood song about his life growing up. One of the illest lines, ….dissappear in the fog, reappear in the morgue.

“Free At Last” Free stands tall on this one letting you know he is here to stay and he is a force. Well played production features some tough rhymes over a subdued beat, makes you listen to him.

“Baby Don’t Do It (feat. Scarface)” Class is in session.. Dope song. Scarface comes on and lends his legendary flow to the cause.

“Nuttin’ On Me” The banger returns and the beard rides this shit like its made by Huffy. Man, I don’t know who was talkin’ bout our mans, but he is NOT happy.

“Walk Wit Me (feat. Busta and Jadakiss)” Pianos that haunt the track coupled with the gruff flows of Busta and smooth sound of Jada = dope as hell. Busta and Jada spit some of the illest flows I have heard from them in a while. Great track.

“Lights Get Low (feat. Rick Ross)” Aight, the beards have taken over the booth…sorta. Overall, I’m not feeling this track and I think it should have been left off. Not impressed by the track and I am not a Rick Ross fan by most accounts so, maybe I’m biased. Not a skipper, just not a fave.

“I Cry” Well done song and personal as hell. Free spits different events that made him cry, crying never sounded so tough fam.

Bottom Line:
BUY IT. I mean seriously, the album only has one slip up and one small problem, its too short. Clockin in at a brisk 50 minutes, you want more when its over. That can be good or bad depending on who you are. I enjoyed the hell outta this cd even with the slip up there. I think Freeway did a awesome job of making a comeback but I am sure that he will be hampered by bad sales because of shitty promotion. You can damn near close your eyes and pick any song to be the lead single. Support Support. Makes me want to grow my shit out.