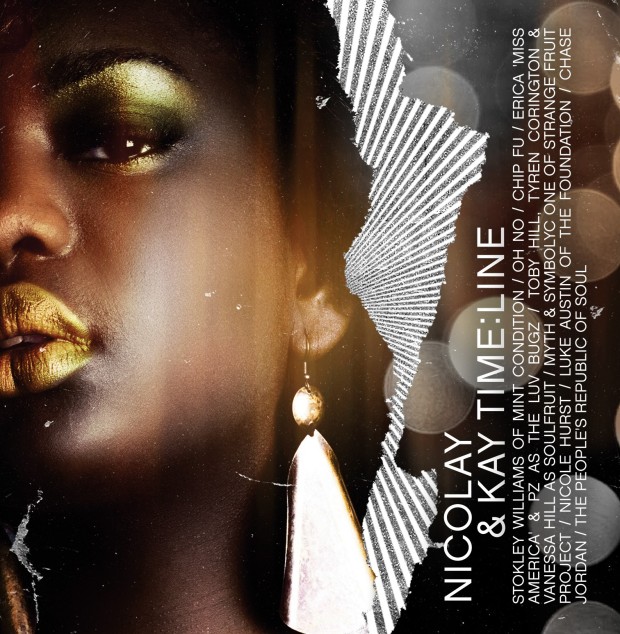 Nicolay brought us the previously critically acclaimed Connected, Here, and Dutch Masters and worked with artists such as Phonte and Big Pooh (Little Brother), Von Pea of Tanya Morgan, The Foreign Exchange, Common, and the Justice League. If you don’t have Connected, Here, and Dutch Masters, YOU NEED TO GET THEM. This album introduces most of us to Kay of The Foundation, Houston stand up! I was excited about hearing this album talking with the man behind the music.

1. Time:Line
This intro track seems to reach back and grab some old guitar and energy and basically lets you know that this was going to be a trip through music and eras. The intro is pretty hyped up and exciting.

2. Blizzard
The funk is pretty evident in this one. Nice track. A lot more hip hop than the previous song and Kay seems to channel Pharaoh Monch with his delivery and wordplay. Kay takes us on the first real journey on the album as he waxes poetic about his story and life. We learn what Houston has known, dude is nice with it…even if he kinda lets us know that he is pushing 40ish.

3. The Lights
Featuring Myth and Symbolyc One (Strange Fruit Project), Nicole Hurst, Luke Austin of The Foundation
Hate to use the word, but this is a groovy track, introducing vibraphone to hip hop. I think that this track, with some obvious modifications, could stand alone as a jazz track. The concept is about the success the game brings and the perils of such. The flows by the Strange Fruit Project tell the tale in one of the better songs on the album. The music makes it a lot easier to digest the harshness of the other side of the game.

4. Through the Wind
Featuring Stokley Williams of Mint Condition
This is the song to play for the ladies or to play when you are thinking of that special lady. It kicks off with a very Elton John, poppy sound that makes you look at your CD player/iPod again like, what CD is this? Kay kicks in and laces the track with some fun lyrics and adequate flow. It’s a feel good track.

5. What We Live
This song I can’t really place. It sounds like mesh of a lot of time periods, but the horns that are normally a blessing on a hip hop record, come across as really repetitive and almost annoying by the end of the track. The flow seems to be a little off on here as well, and almost fights against the song as Kay talks about the balance of what the artist wants, and what the public wants, and what they feel. I think it’s worth a listen though, but maybe only once.

6. I’ve Seen Rivers
Hip hop is really poetry to music. This song is based on Langston Hughes “The Negro Sees Rivers” which is also a fly poem. The song seems a bit off though. I think the message gets lost with the track. The track reminds me of some Benny and the Jets style extra Brady Bunch Theme type song. There is a nice increase in intensity that dances with the lyrics, but overall, it’s just the wrong track for the words.

7. Tight Eyes
Featuring Erica ‘Miss America’ and PZ as the Luv Bugz, Oh No
Smokers and party people, this is your jam. Now don’t get it twisted, this is not a club record, this is a BEFORE the club or after the club record. Not a banger. This is a smoothed out tracks, as most of the album is the same. This one seems to fit squarely into the late 80’s R&B sound, but features some more repetitive chords like song 5. Balance is achieved with some well placed horns and mood so it gets over.

8. As the Wheel Turns
This is another track that rides real nice. Reminds me of some old Michael Jackson serenade vibe, however, the hook kinda ruins the smooth track with its broken nature. The story seems a bit off too as it jumps quite a bit and is a direct contrast to the track; too smooth to skip though.

9. The Gunshot
Featuring Chip Fu
This is the best song on the album. The music is perfect, the flows are great, and the story is flawless. It’s very appropriate to note that this song has a revolutionary vibe to it, complete with some reggae chorus. Unity has never sounded so good.

10. Grand Theft Auto
The guitar and energy return on this track, with a title that tells the tale. I really dig this cut. The song is a wild chase that matches the frantic pace of the music quite well.

11. When You Die
Chorus aside, this is a great cut. Deep song that I don’t want to ruin for you, but it’s really a great song. The music and the delivery make this song feel a lot lighter and more feel good than it is. Did I mention that this is a great song?

12. Dancing With The Stars
We have arrived at the future. The final song seems to be a more advanced attempt at music and rap, think Love Below type hip hop, or trip hop if you will. I think the lyrics must have been from the future too, because they kinda flew over my head. LOL, not really. This song is about a relationship from now to infinity and how the love they have transcends time and space. Lovely song, but I think the music is a bit loud in comparison to Kay’s vocals.

Bottom Line:
Out of his previous CD’s, this is the most musical and most cohesive. At the same time though, it may come across not as exciting as the others that had more of a mixtape and underground hip hop feel to them. Kay does a really good job with his flow and rhymes, but I think that his voice and delivery are often times so laid back, that it almost comes across as part of the music and you miss a lot of his flow. The juxtaposition of Tigga’s witty, brash delivery balances out Nicolay’s musical muse. I liken it to Eminem in that Em’s flow was so complex, the beat HAD to be simple so his lyrics could live and be heard. If you don’t believe me, take your favorite Eminem song (renegade is NOT his) and try and appreciate just the music. None of those songs can really live as an instrumental, but they work with his voice. Nic’s music is so musical, that you have to stand up on it or you will be drowned out. Kay held his own and the overall cohesiveness and depth of the music and transitions coupled with the lyrics balance most any issue I had with the album. Overall, this is a solid album, definitely worth a purchase.