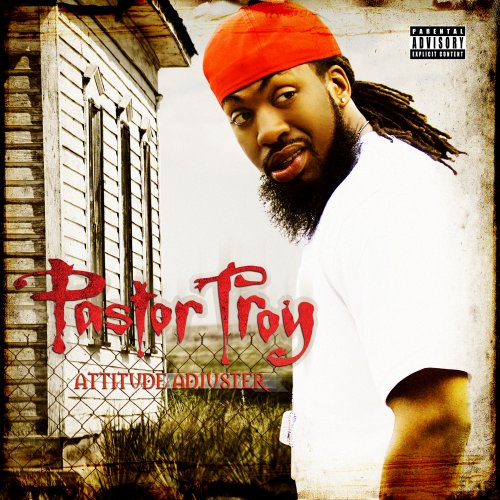 Known as one of the rawest talents in the South, Pastor Troy returns with his NINTH album! Yeah, the Pastor has been doing a lot of preaching lately. This one titled Attitude Adjuster, and the Pastor tries to rekindle that old flame he had several years ago. Pastor has his base audience that he caters to, but when he went mainstream he lost his edge. So now Pastor has hit the grindin circuit releasing album after album bent on winning that core audience back. Since relocating to Sacramento, California he has a new location and new label Real Talk, looks like the Pastor is making his way back to the pulpit!

It’s On
Troy kicks it off with some talking, getting you ready for the album, nothing major just another rapper tongue rasslin on their intro.

I’m Hot (I Got That Lava)
Pastor got a gritty beat that fits his style, and he came out with a good song! Pastor reminds us how hot he is by comparing himself to lava. He said he got that lava…good song, but PT might be fish grease!

Street Law
Pastor started this one off with, “Laws and rules are meant to be broken/that’s why I get high and keep smoking.” PT basically says forget the laws of the land, he lives by the law of the streets. This song is pretty good, got to check for this one.

Dread & Alive
This is one for the people with Locks in their heads. I think that the idea of the song is dumb, which makes for a subpar song. I got to go the other way on this one.

For My Soldiers
Pastor made this one talking about the people who battle the frontlines at home. The song was kind of dull, the beat had a tight sample, but I’ll give him a pass on this one! Nah, I can’t do that. The song was WEAK!

My Box Chevy
The name says it all, but the story telling is pretty good, the hook is redundant (“My box Chevy, my box Chevy x infinity!”) The beat on this one is tight, which makes up for the weak hook. The song has TRAP STAR written all over it. CHECK FOR THIS!

Do You Wanna Dance?
The last thing I want to hear is a Pastor Troy sexy/club song! Once again, when Troy goes away from what he does well he produces a dud! SKIP!!

Strap Up
An intro with a clip from a movie, you know the one, “you think you big time…” Moving along.

15 Blocks
Pastor goes back to what works for him on this one. This is Pastor talking about moving work, something he loves to talk about. But the D-Boys will love this one!

Down To Ride
This song definitely is showing the Cali influence on Pastor with the beat, but Pastor is tough talking over it. Pastor is putting up some simple, lazy hooks on this album. But maybe that’s what he does.

Attitude Adjuster
The title track is an intro. This time it’s Sam L. Jackson off of Pulp Fiction, the verse from the Bible one. Heard it a million times.

License To Kill
Nothing needs to be said about this song. He is just talking about all of his artillery and that he has a license to kill? Yeah…whatever! SKIP!!

Put Him On The Scope
Some simple rhymes and yet another lazy hook doom this song. The production isn’t that bad, it’s just the weak lyrics provided by Pastor that killed it. SKIP!!

PT Cruiser
First words off the song,;“We made it!” That is how I felt after listening to this album. This is the outro. Just a beat to ride out to.

Bottom Line:
PT looked tired by the end of the album, putting out some weak songs and a lot of filler. The album started off good, but after the midpoint it started falling off. Pastor Troy subject matter is simple and that’s the problem. He has to constantly be selling drugs, shooting somebody, and smoking Dro. How many times can you make the same album? The man loves to make music and I can’t hate on that, but I wish he would take some time and put out some more classics like his first two.