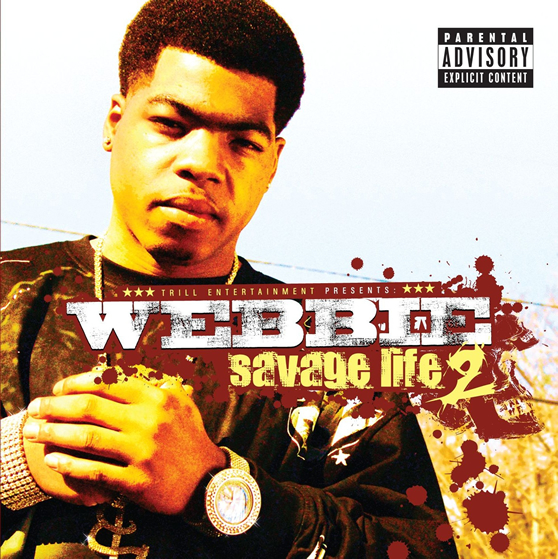 Webbie reached gold status with his debut CD Savage Life on the back of “Give Me That“, the hit single. Rolling with his boy Lil’ Boosie and the other label mates on the heels of his Billboard top 10 hit single “Independent”, he also adds Lil’ Phat, Mouse, Big Head, LeToya Luckett, Rick Ross, Young Dro, Bun B and some beats by Mannie Fresh. Let’s check out his official sophomore CD.

1. 2 Smooth
Produced by Mouse
I’m impressed. No intro, just straight shit out the gate. The song rolls. I think this, is one of the better songs on the album. The beat is strictly pimp shit and Webbie does it justice with a chorus that chants “I’m too smooth”. I am impressed early with this one.

2. Six 12’s
Featuring & Produced by Mouse
Then he follows up the smoothness of track one with what is supposed to be a bass track…I think. Anyway, our artist is here slangin’ linguistics about his, well, 6 X 12’ speakers. Yeah, it’s a throwback, I didn’t know folks were really rockin’ bass raps anymore, but if Tum Tum can do it…

3. Independent
Featuring Lil’ Boosie & Lil’ Phat; Produced by Mouse
Rarely is the best song of the album the single, but this is the case here. The catchy hook and newest anthem for the chickadees is simply the most complete track on the album. Fun song, but you have been hearing it for months now.

4. I Know
Featuring Young Dro; Produced by Mannie Fresh
I still think Mannie is one of the dopest producers from the South. You take his beats and add one of the most slept on rappers in the game, you get a pretty sure fire hit. This is one of the early favorites on the album. Webbie returns to the alter ego of that smooth pimp and Dro adds his signature flow to the formula. We have a winner folks.

5. Just Like Me
Produced by Mouse
Father and son stories? Sure, Webbie gotcha. In this track he raps about kickin’ it, raising his son and living life best as he can. I can’t hate on this song. A man talking about his son? You won’t catch me hating on this shit at all. Good track.

6. Thuggin’
Featuring Lil’ Boosie, Lil’ Phat, & Shell of 3 Deep
Another southern banger, Webbie brings it about, well, thuggin’. Webbie keeps it real simple and this is a summer jam that the dudes will be blastin’ from the 6 X 12’s at the park on Sunday as they swang the whip.

7. I’m Hot
Produced by BJ
The guitar had me amped, the beat had me interested….but the chorus is horrid. I’m hooooooooot , it’s my turn / I wouldn’t touch me cause my hand might burn / I’m cooooooold, ya already know / you can go by what you heard dependin’ on what they told’ya. Other than that hook, it’s the usual machismo and big willie talk. The beat is crazy as hell though and will probably be a mixtape star akin to Rich Boys’ banger.

8. You A Trip
Featuring Big Head; Produced by BJ
Triumphant horns serenade you as the track starts and Webbie opens with Imma tell’ya like a man, I don’t owe y’all shit / and imma say that shit again, I don’t owe y’all shit. Clearly letting you know that this track is about those haters growin’ up that are acting like HE is the one trippin’. Think Mike Jones’ “Back Then” with more talent and a better track. Big Head comes to add some cosigning from the camp, but this track could easily be done without his bars.

9. Just Like This
Featuring Big Head; Produced by BJ
The Bayou is apparent with this one. I can see a marching band playing this in the streets. Pulling from some bluesy jazz type inspiration, this song is a winner. Again, the lyrics are quite simple, but that’s his thing, and he does it well. Big Head steps up and does a lot better than that last song, but again, he just doesn’t sound good with Webbie on a track. They clash.

10. A Miracle
Featuring Birdman & Rick Ross; Produced by Mannie Fresh Mouse
Rick Ross has become Mr. Midas as of late and when you couple him with a the richest mouth in the game, we have something. The hook is crazy and reminds me of the old south tracks from UGK and/or Geto Boys. The song is about taking time out to realize how far each rapper has come from the days of slangin’ white and other pleasant memories to now, ballin’ like testicles and living like a tycoon. Fly shit as well.

11. I’m Ready
Produced by Mannie Fresh B-Real
It’s a Mannie beat, so you know what it sounds like. Webbie gets on and rides the beat a lot better than I thought he could; Know what happens when ya scayed (scared) / be cah’ful how you play it / All ya money and ya bread / don’t mean nothing when you dead / ole fruity ass nigga / smooth booty ass nigga….LMAO. Yo, I had to quote that here for you, the dude is insane. Smooth Booty? Yo, south stand up, tell us what this shit means. Lol.

12. I Miss You
Featuring LeToya Luckett; Produced by BJ
Best way to make a hit? Use the same beat as previous hits. Samplin’ a little Diana Ross worked for Puff, why not Webbie? LeToya shows more southern loyalty as she graces the track on the singing hook and our boy raps lovely about missing his girl while he’s handlin’ his business in the streets. Isn’t that sweet, a hood love story.

13. Doe Doe
Featuring Bun-B & Lil’ Phat; Produced by Mouse
I am kinda shocked that we only see Bun-B and Pimp C once this entire album. Unfortunately, Bun B shows up on a track about rollin’ and “blowin’ doe doe, blowin’ dae dae.” Yeah, this is a smokers jam. I used to smoke, but this is NOT the shit I wanted to hear when I was blazed, joe. I ain’t high, and this song still sucks. SKIP.

14. Fly As An Eagle
Featuring Foxx & Pimp C; Produced by Savage & BJ
Ahhhh, I can feel UGK all over this track; I stay high as an eagle mayne / fresh like canday paint / sharp like a razor blade / gotta stay playa made. This song is that southern swag from Houston to the Bayou no doubt. It’s classic and simple and really gives Webbie the chance to step his game up with Pimp C on the track…doin’ it only like he can.

15. Y’all Ain’t Makin’ No Money
Produced by Mannie Fresh Simms & Mouse
Mannie being Mannie, but that aside, Webbie does his thing again. This could be the next duo because Webbie rides these beats quite well. The title is the hook. It’s a party album and will be the banger in the clubs no doubt.

16. First Night
Featuring & Produced by Mouse
An attempt at storytelling here as our pair talks about that first night out with a chick. Mouse sounds like Project Pat or Juicy J as he raps some boring shit about doing his thing. I’m not impressed by the lyrics or delivery, but the beat is hard to deny. The hook and overall theme of the song is not my thing as they flip about hitting, forgetting, and the usual misogyny of rap. I’m tired, SKIP.

Bottom Line:
I was surprised overall. The production is simple overall, but it’s full of songs that could or would or should play in the club or the ride and are just, overall, good album. The production of Mannie Fresh and well placed colabs with Ross, Dro, and Birdman seem to carry you through the CD. Big props to Webbie for cutting 16 tracks with no interludes or intro. My only glaring issue with the album is that at the end, I have no idea who Webbie is. At times, he is this “smooth pimp/player” and at other times, he is this hood hustler. Normally, this wouldn’t be a problem, but the way he flows when he is doing one or the other almost makes him seem schizophrenic. Other than that, it’s a solid album, if this is your kinda music.