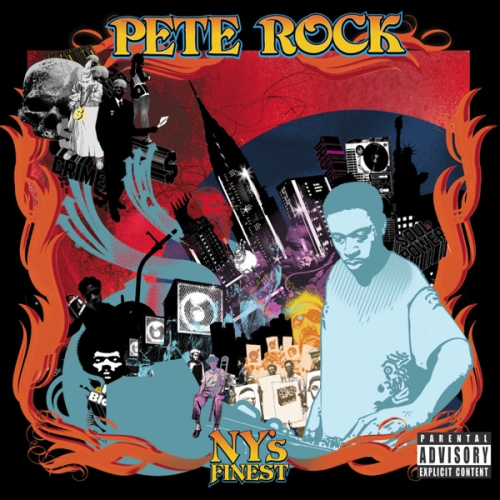 Since 1987, Pete Rock has steadily carved his place in Hip-Hop and collected legions fans along the way. First as one half of a duo with CL Smooth (“T.R.O.Y.”), then as a producer of other artists as well (Nas’ “The World Is Yours”). Well, it’s 2008 and Pete Rock is still grindin’ as he releases his 6th solo album in 10 years, NY’s Finest. As you can tell by the name, the album features fellow New Yorkians and has Pete Rock producing most of the album as well as rapping. Let’s see what the Soul Brother cooks up this time.

1. Pete Intro
Produced by Pete Rock
This is a short intro that sets up the tone of the album complete with clips from movies and such. This is continued through the album and precedes and ends each track. Nice touch; increases the album’s cohesiveness.

2. We Roll
Featuring Jim Jones & Max B; Produced by Pete Rock
The album officially starts of with Jimmy Jones and Max B. Now, if you read my unfavorable Jim Jones review last week (Harlem’s American Gangster), you probably think I won’t like this song either. Well, you’re wrong. It always surprises me how well Jim Jones and Pete Rock sound together (Remember “G’s Up”?). All in all, it’s a good song that combines Jim Jones and Max B usual rhymes over a well produced smoothed out Pete Rock track.

3. Til I Retire
Produced by Pete Rock
Pete goes solo on this one and it uses samples of Run DMC’s “King Of Rock”. Even though Pete Rock isn’t known much for his lyrics, he does his thing here with lines like “More bars than Alcatraz, just call me The Rock”. It’s basically talking about various things like his place in music and how he’s not going anywhere. Good song.

4. 914
Featuring Styles P & Sheek Louch; Produced by Pete Rock
It gets gutta when Pete Rock and D-Block get together on this one. This track has an old school 90’s feel but that not a bad thing here. This is basically a song reppin’ 914 (New York’s area code). If you a D-Block fan, don’t worry they didn’t hold back on the gangster talk here

5. Questions
Featuring Royal Flush; Produced by Pete Rock
Damn, I ain’t heard from Royal Flush since like 1995 when he had that song “Iced Out Medallions”. Well he’s back and still doing his thing. He even goes into talking about his divorce and how he had to “get rid of that bitch”. Along with the track, he sounds like he did back in ’95, so I can’t hate on that. It’s an all right track.

6. Best Believe
Featuring Redman & LD; Produced by Pete Rock
Redman jumps on the track like always. Doesn’t seem like Redman flow is always unswerving? The hook, done by Pete Rock, is kinda lazy though. I never really heard of LD but he and Pete Rock’s verses don’t sound too bad here. The beat is okay, not great, but okay.

7. Ready Fe War
Featuring Chip Fu & Rene; Produced by Pete Rock
This is basically a Reggae song. For those that don’t know, Chip Fu is from the group Fu-Schnickens and Rene is from the R&B group Zhane. Don’t get it twisted, Chip Fu is not rapping like he was with Shaq (“What’s Up Doc?”). I thought dude was Maxey Priest. It’s alright; more Reggae than Hip-Hop though.

8. Don’t Be Mad
Produced by Green Lantern
This is the only track on the album not produced by Pete Rock. Green Lantern provides a track that sounds…just like Pete Rock. The beat isn’t bad but this song is slightly brought down by Pete Rock. I mean he’s good sometimes (like on the previous “Til I Retire”), but he’ still not a lyricist.

9. Bring Y’all Back
Featuring Little Brother & Joe Scudda; Produced by Pete Rock
Whoa. This beat on this one is a banger. Little Brother with help from Joe Scudda do damage here. The funny thing is, since Pete and 9th Wonder’s beats sometime sound similar, the track reminds me of stuff Little Brother did before they became a duo.

11. That’s What I Am Talking About
Featuring Rell; Produced by Pete Rock
I guess this is the closest you’re gonna get to a club record on this album. The song features ex Roc-A-Fella artists Rell doing the hook. The beat is the usual smooth Pete Rock style. It’s a nice laid back sound.

12. The PJ’s
Featuring Raekwon & Masta Killa; Produced by Pete Rock
Is it me, or did after the buzz of Only Built 4 Cuban Linx II died, Raekwon fell off a little? He sometimes just goes on and on about nothing. Well, Pete Rock provides a sufficient track but it kinda sounds boring after Rae and Killa jump on. Kinda sad to see what Wu Tang has become.

13. Made Man
Featuring Tarrey Torae; Produced by Pete Rock
On this track Pete Rock reps NY hard on this track with lines like, “I rep New York like I play for the Knicks”. He once goes solo on the rap side with Tarrey Torae singing the hooks and ad-libs. The beat get’s kinda redundant but it’s serviceable.

14. Let’s Go
Featuring Doo Wop; Produced by Pete Rock
Damn, the pace picks up real fast when it gets to this track; it woke my ass up. Is this DJ Doo Wop? If so, he ain’t bad on the mic at all. The song is about a minute and a half so it’s short but to the point. There are talks about Pete Rock and Doo Wop doing an album together under the name Tango & Cash. Now, I’m thinking it might be worth a listen.

15. Comprehend
Featuring Papoose; Produced by Pete Rock
Papoose comes through for the last track on the album. Pete Rock does well to make a track that sounds good under Papoose’s voice. The one problem I have with this track is a line Papoose says at the beginning; “When that storm hit the South in New Orleans up, me and Kanye the only MC’s who spoke up”. Damn, David Banner, Mos Def, and other didn’t? Other than that, it’s an alright way to end the album.

Bottom Line:
Pete Rock is mostly consistent when it comes to his beats; on this album it mostly the same. The sound of the album itself is unified and that says a lot in today’s market of albums full of solitary singles. Although there are some slip ups and the wheel doesn’t get reinvented, it’s still just Hip-Hop baby and Pete Rock brings it.