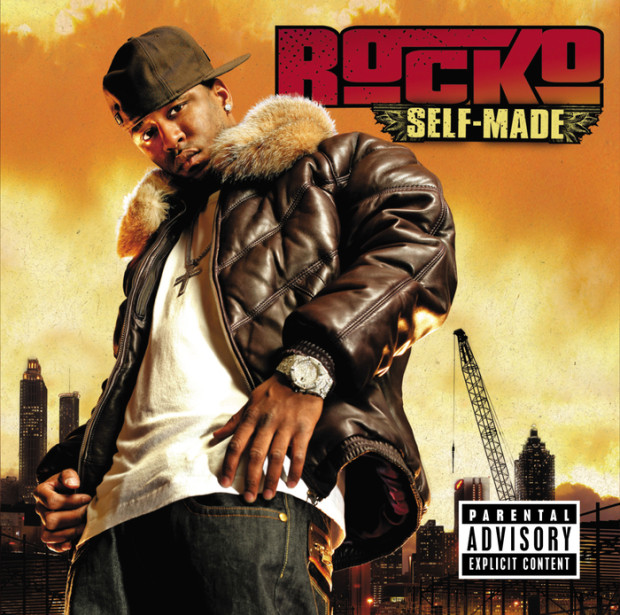 I don’t know about you, but other than hearing it was coming out, I hadn’t heard much about this CD. His lead single is solidly top of my worst songs in the past 20 years list, but everyone has a bad song…at least a song that I don’t like. The song peaked at 15 on Billboard so you draw your own conclusion from that.

1. In The Morning
Produced by DJ Quik & Marvelous J
Rocko raps (?) about his love for and quest for money in this song. I put a question mark after rap because he is basically singing…and it’s the most annoying thing I’ve listened to lately outside of his lead single. The beat seems kinda armature and repetitive.

2. Umma Do Me
Produced by Drumma Boy
What can I say? From concept, to lyrics, to beat, this is one of the worst songs I have ever heard. I hate it. Unimaginative, disinteresting, non creative, just…I’m out of adjectives. I am amazed that it reached so high on the charts, but at last check it was down to 66 so that’s not a good omen.

3. Hustle Fo
Featuring Lloyd; Produced by Marvelous J
The real want me rich / the haters want me po’ / What you tell them haters / no No NO . *sigh* I’m trying, I really am. The beat has promise, but sadly, it sounds like Marvelous J only has one keyboard and one machine because this one has the same short comings as the first song. With the right equipment, this beat could be something better.

4. Busy
Produced by Drumma Boy
Rocko asserts that he is busy making and spending his money, so busy that he can’t do mundane tasks like walk and eat. That’s a strong hustle, in theory, but I am sure some little kid is penning that same line for a grade school cipher at lunch time. Beat sounds like a new producer, maybe even a MySpace producer, very run of the mill.

5. Tomorrow
Produced by Drumma Boy
Live everyday like there is no tomorrow, this is the party song. The beat is ok, again, seems hampered by equipment shortcomings. The concept of the song isn’t bad and the execution isn’t disgusting. It’s kinda fun…not necessarily good, but fun.

6. Old Skool
Produced by Drumma Boy
My old skool cost more than yo’ new skool. ..is about Rocko’s old school, sorry skool, collection of cars that is extensive enough to cost more than your new whips…I guess. The beat is better but it’s still predictable and basic.

7. Priceless
Produced by Fatboi
They gave Rocko some bounce on this track to which he sped up his flow. The result is one of the few tolerable tracks on the album. The track is a cheap rip off from the old MasterCard commercial essentially as he quips 200 hundred thou on the car (precisely) / quarter mill round my neck (I’m icy) / a couple mill for da grill (that thing respect) / but this swag here (money can’t buy you that, cause its priceless). Ok, on second thought, the instrumental would be tolerable.

8. Like This Here
Produced by Drumma Boy
I’m so fly, I should be a pilot. Ok, one of the more comical lines on the whole album, one of the few times I smiled positively thus far on the album. “Like This Here” is a song fashioned after typical speech patterns of the South where “like this here” is used. Another MySpace worthy beat, nothing new here folks. He even does the city shout out thing…sadly, he mentioned my hometown.

9. That’s My Money
Produced by The Runners
We are peppered with the word Swag throughout this song and album, which apparently, Rocko has for sale. Oddly, “Swag For Sale” would be a nice song title even though I hate the word. We get some singing on the chorus along with some strong sounding chords on what is one of the few bright spots thus far on the album.

10. She Can Get It
Featuring Dre; Produced by Cool & Dre
Rocko called in the heavy hitters Cool & Dre who seem to have the Midas touch lately. With hopes of producing a hit by adding singing to the beat package similarly to what they did on “100 Million Dollas” for Birdman, the best sounding song of the album is born. Following formula, this should be the second single off the album. The track is nice with the strong guitar and chord combinations and vocals, it rolls pretty nice.

11. Snakes
Produced by Drumma Boy
Oh my, we get some storytelling from Rocko? Not only that, but another up-tempo flow and beat, I’m impressed…initially. The stories themselves, typical, the beat, pretty good. Overall, not a horrible song. I think Rocko’s flow may actually be more grating as this song wears on.

12. Meal
Produced by Drumma Boy
The track is very good. Organs, piano, chords, little synth, some bounce, very good track indeed. The flow is annoying as hell. It’s a shame what he did to this track.

13. Thugs Need Love Too
Featuring Monica; Produced by Drumma Boy
I guess this is some kind of anthem for the thugs, slow song, maybe even sentimental. Rocko waxes lovingly about the women that hold down thugs across the nation: Grandma, moms and girlfriend. Overall, it’s not bad, it’s just not impressive. It’s average I guess. Monica sings the hook and does a good job.

Bottom Line:
The review I did for Webbie was an example of the difference between being objective and something just being bad. Webbie’s album was well done and fun, it was a good album. Personally, it was not my type of music or something that I would bump, but I couldn’t say it was a bad album, that would be a lie. This album is just bad. Other than the 2 or 3 good songs, the rest of the album was a waste of time. Overall, the beats are basic at best and Rocko, who claims to be self made, seems to be a very bad Jeezy knock off. His slow flow is hampered even more by elementary lyrics and poor delivery. It’s just not a good album. The disparity between is 2 or 3 good songs and the rest of the album is monumental at least. Why didn’t I say SKIP on a single track on the album if it’s so bad? I reserved it for here. SKIP.