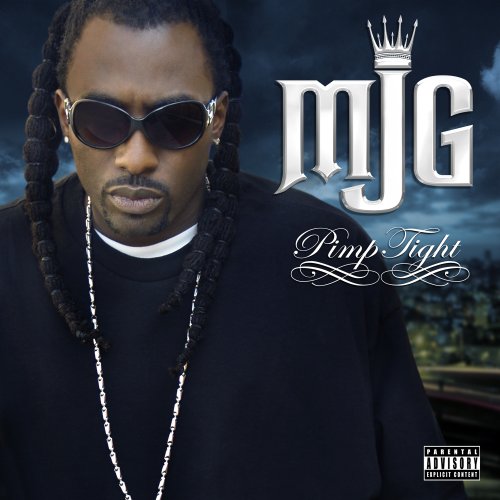 After 8Ball released his sixth solo album in April 2008, I guess it was partner MJG’s turn at the plate. With this being only his second solo album release in over 10 years since No More Glory in 1997, does MJG hold up the standard or prove that 8Ball & MJG are better together as a group than solo artists.

Y’all Ain’t Ready
Even though I didn’t think MJG was dead, I was thinking that it was over in terms of his rap career, as I haven’t really heard much from them since their single “You Don’t Want Drama” back in 2004. But this Intro is pretty much MJG letting us know that he hasn’t gone anywhere and they we aren’t ready for the music he’s about to drop on us. This is pretty much a pointless intro with MJG yelling over some weak music production. SKIP

Pimp Tight
Right off the back we are hit with the album’s title track and it doesn’t really do much for me as a listener. The beat on this song is pretty average and sounds like something that I’ve heard before too many times in regards to music production. MJG isn’t really saying anything as far as lyrics go that keep me interested.

Get Yo’ Ass Up
Featuring 8Ball
This is a track featuring MJG’s partner in rhyme 8Ball who stops by for a guest appearance. The track’s beat initially caught me with the ill lead guitar and vocal sample used by Kanye West in Beanie Sigel’s song “The Truth”. But after the initial second the beat came in very bland and remained boring. Once again MJG isn’t really saying anything lyrically to catch my ear, and for that fact neither is 8Ball. I think 8Ball outshines MJG on this track though.

The Truth
This is pretty much just an interlude to the next track and really serves no purpose. SKIP

Get You A Hoe
The beat on this song is pretty nice and had me noddin’ my head. MJG is basically talking about getting a hoe so she can make you that money. He’s telling about his experience with a hoe that knew and fucked with. Nothing really new here, we’ve heard this song before by plenty of different artists.

High Like An Eagle
This track is basically a song about smoking and how much MJG indulges in it in his life. The beat on this track is a little above average but not by that much. Once again, this song has been done by other artists and done better than this. I’ll take Lloyd Banks’ “I Get High” or Method Man & Redman’s “How High (Remix)” over this song if I want to listen to something about smoking or getting high.

Big Stakes
This is another interlude with a guy explaining how a good pimp understands the rules and regulations of the game. SKIP

At Last
This song uses the same beat that was featured on the Intro track of this album, which as I previously stated was pretty weak in production value. The only thing new about this track is the out of place Biggie vocal sample used within the beat/chorus. I’ll take a pass on this track and keep moving.

My Life, This Way
This is probably my favorite track on the entire album and for the fact the best track. The beat provided on this song is great and really fits the mood and topic on the track. MJG is finally saying something in his rhymes that are catching my ear and has a message to it. If more tracks on this album were like this one in quality I would probably like this project more than I do.

I Still Lay It Down
Featuring 8Ball
Right after that one high point in the album we’re back in a downward motion with a bad song. The beat on this track is pretty average and generic sounding and MJG and 8Ball’s lyrics don’t really complement it or make the track any better.

I Tried
The beat on this song is okay just because it uses the same sample found on Mary J. Blige’s “You Are Everything” and LeToya “Torn”. But this song can’t be compared to those because it’s just not up to par with them. MJG does a pretty good job with the lyrics on this song, as this is probably the second best song on the album. The chorus is weak to me, with it being done already and way better by Bone Thugs-N-Harmony and Akon on their song “I Tried”.

Whatever I Wanna Do
Damn I’ve been waiting for somebody to do a song using this sample, but this is just using it the wrong way. The sample used in this track on the beat doesn’t fit well at all. MJG isn’t really saying anything with his lyrics on this song and the chorus is just god-awful (“I’m just riding in my car, and I just got me an outfit/And I just got me some brand new shoes//And I’m feeling like I’m ready to go out and do whatever/Do whatever that I wanna do//”).

Small Town Girl
I don’t know what fascination is with this sample and why music producers are using it in their beats but it’s not Hip-Hop at all. This shit is really weak and sound corny especially after adding rhymes on top of it. I’ve already heard this sample used by Cam’ron on his song “Just Us” on his Public Enemy #1 mixtape. He used it better than it was used on this song, but the sample should still be avoided at all cost. I’m definitely skipping this track without hesitation.

It Ain’t Over
Contrary to the title of this song, it is over, and it’s over in a lot of ways. Once again this same weak beat is used for the third time on this album and it doesn’t sound any better. I don’t know what he was trying to do, but this isn’t “Hova’s Song” on Vol. 3…Life and Times of S. Carter. That’s one of the only albums that I’ve heard that has been able to use the same beat nicely for the Intro and Outro. MJG should have left this shit alone after the first track.

Bottom Line:
After 14 tracks, well really 10 tracks (minus the Intro, Outro, and Interludes), clocking in at about 43 minutes total, I’m glad that MJG didn’t keep it too long and released a fairly short album. With only three good songs on this album out of the 14 tracks, it wouldn’t have been in his fair to release an album of long length. This is pretty much a poor album that I wouldn’t suggest anybody to purchase unless they are diehard MJG fans or fans of both 8Ball & MJG. I don’t expect to see any videos on TV or singles on the radio from this album like we saw with “You Don’t Want Drama” because this album just isn’t good enough for that. Just stay away from this album all together and cop the good songs separately off iTunes.