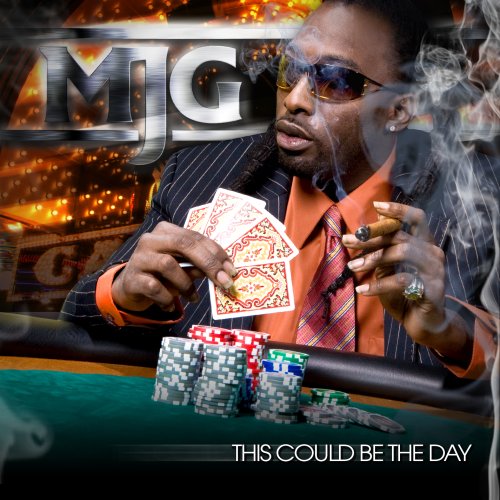 MJG is already a legend in Hip-Hop, so not too much introduction is needed in that regard. However, his solo career has been much different from his group albums. You can think of 8Ball & MJG like Outkast, they are great together, but they do not seem right separated. MJG received some critical acclaim for his debut No More Glory back in 1997, but that was ’97. Giving the public his third offering (second in roughly 3 months) titled This Might Be the Day, MJG got fans wondering can the vet still bring it like he used to. Let us check it out.

This Might Be the Day
Produced by TMacK
Well MJG gives you the title track right off the gate. I love the beat on this one, MJG comes out strong, but he stumbles a little on the intro. It still is worth a listen though.

Shades On My Face
Produced by TMacK
MJG raps about the shades on his face over a chopped up hook. This one is for the clubbers, which is why he selected it for his first single. It is all right, but why do I feel like MJG mailed this one in? “Shades keep my nerves at the right temperature; you can never make it rise like an impatoor?” What?

Breathe
Produced by TMacK
MJG raps over a synthy beat which he turns the tempo up a bit. The song takes a long time to come on, but when it comes on, MJG gives us a routine performance. There is a good chance that you will hear this at a Southern nightclub with its bouncy beat.

Can’t Get Rid of Me
Produced by TMacK
MJG goes with some spacey production on this particular song, and I cannot front, I like this song. The hook is fun, and MJG compares his self to Dracula and he says he will outlive roaches on the track! The song has a nice beat and MJG did his thing with it. CHECK FOR THIS!

Busted
Skit…nothing to report here, but a dude walking in on some dude laying pipe to his woman.

What Would You Do
Featuring 8Ball; Produced by TMacK
Now you would think that when Ball & G got together that they would do a song other than one about screwing someone else’s woman. Bad decision on their part, maybe they should have come with a “You Don’t Want Drama?”

Mack Life
Featuring & Produced by TMacK
The producer who produced 85% of the album jumps on this string laced beat that he provided. He did his thing on the song, stealing it from MJG. The song is all right, but the hook is kind of wack.

Jungle
Featuring GC; Produced by MJG
MJG produces what is the best beat so far on the album, giving us some of his Memphis flavor with some horns and a sample that gives it that funky sound that the ganja smokers will love. I have to say that MJG’s Gritty Comity came out hard on this song. BANGER!

Roll Wit’ Me
Produced by TMacK
Sounds like MJG is experiencing with that techno rap sound, and it does not work well on this track. MJG resorts to dumbing down his lyrical content on this one. Come on MJG quit making strip club music!

Gangsta Gangsta
Featuring Alfamega; Produced by TMacK
Alfamega has to be one of the more goonish dudes in the A. On this track, they give you exactly what the title states. Hard lyrics over a hard beat; that will be a song that will be banging out of your local trapper’s car in your city. BANG THIS ONE!

Dangerous
Featuring Gucci Mane and 8Ball; Produced by MJG
MJG produces another one, this time Gucci and 8Ball jump on the track this time. Once again, they make a song that is talking about women instead of taking advantage of Gucci’s “hood popularity.” Gucci murders the hook, and I mean that in a bad way. You can count on hearing this one bumping in the strip clubs.

Big Time
Featuring Slim; Produced by TMacK
MJG steps way out of his lane on this one! The production on this joint is bubble gum, and the crooning by Slim does not mesh well with MJG at all. I also do not like this one at all. I have to say SKIP!

It’s Been So Long
Featuring 8Ball; Produced by MJG
Finally, they make the right decision subject matter wise on their collabos. This song is the perfect way to end the album with Ball and G rapping over a nice beat that MJG created. The two rap about being on the road and the feeling when they come back home. Have to love the way the two mesh on this one. CHECK THIS OUT!

Bottom Line:
This album was solid, but I wish that MJG had dug a bit deeper in his rhyme bag, because his subject matter was on the one-dimensional side. He had some good production throughout the album, and everybody knows that when you get good production, average lyrics look a lot better. MJG had some interesting collabos on the album, and when he and 8Ball teamed up, the songs did not live up to the billing. MJG fans will be satisfied with this offering if they can get by all the songs about the women.