Kidz In The Hall – The In Crowd [Review] 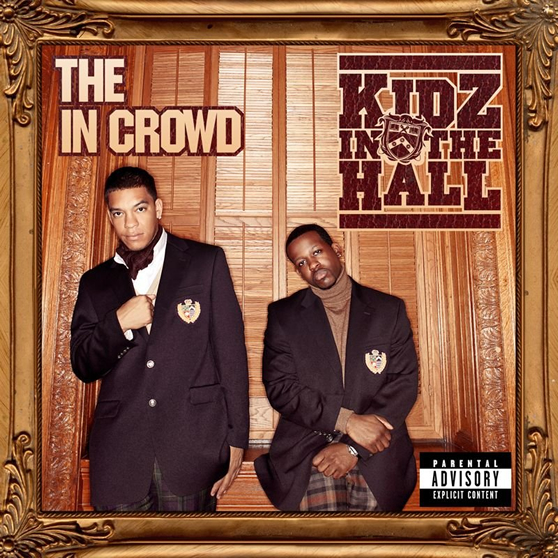 There’s Common, Kanye, Lupe, and now you can add the Kidz In The Hall to that list of real artists in the industry representing Chi-City. When I got the call to handle the review of Kidz In The Hall’s second album The In Crowd I was very excited for multiple reasons.First off, I get to review an album of a group from my hometown of Chicago. Secondly, they are some of the few artists producing real Hip-Hop music in the industry today. Being a fan of Kidz In The Hall don’t assume a biased review from me, but let’s see how well Naledge and Double-O hold up from their debut album released in 2006 School Was My Hustle.

Black Out
Produced by Double-O
Aww shit, this is my kind of music right here. This is definitely representing that real Hip-Hop music that’s missing a lot in the industry today. The beat supplied by Double-O immediately caught my attention from the initial upright bass strings and bangin’ drums. Naledge is right on the attack with his lyrics, picking up where he left off on the first album. This song reminded me of something I would hear from A Tribe Called Quest back in the 90’s on an album like The Low End Theory. This is a great start by KITH (Kidz In The Hall).

Paper Trail
Featuring Phonte; Produced by Double-O
Double-O tones down the energy of the album from the initial track with a more soulful produced beat. This beat fits very well with the lyrics spit by Naledge and Phonte. Phonte especially sounds right at home over the beat as it has that 9th Wonder feel that was supplied for Little Brother.

Drivin’ Down The Block (Low End Theory)
Produced by Double-O
Damn, this is a straight banger right here. The beat from Double-O is knockin’ on this joint as it quickly kicks back up the energy of the album. I see that Kidz In The Hall know what I’m talking about with A Tribe Called Quest and their album The Low End Theory as it is referenced in the song title and throughout the song. Naledge does his thing on this track with the lyrics as his flow matches nicely with the song’s beat. Nice job with the Masta Ace sample and the interpolation of OutKast’s “Elevators (Me & You)” in the hook.

Lucifer’s Joyride
Featuring Travis McCoy; Produced by Double-O
Despite the song’s title, this album is definitely more like a roller coaster with the up and down tempos of the songs. That’s a good thing though as this song comes off smooth with a nicely produced beat by Double-O and equally good rhymes from Naledge. Travis McCoy is a nice addition on this song with his background ad-libs and crooning. Enough with the damn Auto-Tune/Talk box/Vocoder!!! I’m getting tired of artists in the industry using this on their songs, it’s getting played out. Give it a rest already.

Snob Hop
Featuring Camp Lo; Produced by Double-O
Once again Double-O turns up the energy on us with an up-tempo produced beat. This beat filled with nicely programmed drums and horns has a very live feel to it. Wow, it was a nice surprise to hear Camp Lo featured on this track. I haven’t heard much from them since they dropped Black Hollywood (which was an average album). This song is pretty good, but it just started losing my attention after a while.

Mr. Alladatshit
Featuring Donnis & Chip Tha Ripper; Produced by Double-O
Double-O slows it back down on us with another soulful sounding beat. The beat sounds really nice though as it has that classic sample feel to it. Naledge drops some good and humorous rhymes on this song in the likes of “My style 747 leer jet fly/Y’all read Swagger For Dummies”. The guest verses on this track are okay but don’t really offer much in skill or appeal coming after Naledge’s verse. Plus, Chip Tha Ripper sounds a bit too much like Rick Ross for my liking and I thought we left these kind of rap names back in the 90’s (Smiley the Ghetto Child, Jack the Ripper, Smoothe Da Hustler, etc.)

Love Hangover
Featuring Estelle; Produced by Double-O
Double-O keeps the beat slow for us on this next song that features Estelle of “American Boy” fame. It might be just me but I don’t think she can really sing that well or at least nothing amazing or spectacular. She didn’t really do much for me on this song and I’ll just continue listening to her only on “American Boy”…Sorry Estelle I guess it just wasn’t meant to be. Naledge drops some nice lyrics about being in love, but I just can’t seem to get into this track. This track is average for me and would probably be one that I skip.

Let Your Hair Down
Featuring Skyzoo & Lil’ Eddie; Produced by Double-O
This is a nice soulful sounding beat produced by Double-O for this track showcasing lyricist Naledge and Skyzoo. I actually watched the video for the making of this song on YouTube and it was pretty interesting. Definitely something that should be checked out with them putting together this song at Baseline Studios in New York. The singing by Lil’ Eddie on the chorus could have been left out and they could have just let the sample play through. This is a pretty solid track though. This just has me wondering when Skyzoo is gonna release another album. I’ve been playing his Cloud 9 album with 9th Wonder for the longest now.

Middle Of The Map Pt. 1
Featuring Fooch; Produced by Double-O & Black Milk
This is what I’m talking about, a track showing that Midwest connection. It’s nice to hear some “Chitroit” (Chicago-Detroit) music on an album and this song doesn’t disappoint at all. Some very nice production from Double-O and Black Milk. Naledge and Fooch do a nice job on the rhymes but I think the beat outshines the lyrics on this track.

Middle Of The Map Pt. 2
Featuring Black Milk & Guilty Simpson; Produced by Double-O & Black Milk
Yes sir, props to Reason!!! (I heard Double-O mention it at the start of this track). The production by Double-O and Black Milk is good again on this track, but it’s not better than Part 1. I don’t think this song overall is better than Part 1 as the lyrics don’t really match up to the previous track. Guilty Simpson’s verse just doesn’t catch me at all. The build up for this track was good but it fell off.

The In Crowd
Featuring Tim William; Produced by Double-O
I know that the Kidz In The Hall were trying to go with something different and out of the box with this song, but this didn’t really get the job done. This track really feels out of place with the rest of the album and I don’t really get down with this song. This track would be a skip in my book.

The Pledge
Featuring Sean Price & Buckshot; Produced by Double-O
“I think that this deal [with Duck Down Records] is an excellent opportunity to spread our wings.” They decide to do just that with this song in collaborating with some of their fellow labelmates Sean Price and Buckshot. The beat is produced nicely by Double-O but once again this song doesn’t really catch me especially with mediocre lyrics by the two featured guests. Sean Price’s voice sounding like Big Pun really disturbs me on this track, I don’t know why. This is an okay track in my opinion, it would have been better off with just Naledge on this track alone.

Inner Me
Produced by Double-O
Double-O supplies Naledge with a nice beat that really fits the mood of the track and his lyrics. This is a good reflective type track, as Naledge sounds comfortable over the beat and the topic. Nice job in bouncing back from some mediocre tracks.

Drivin’ Down The Block (Remix)
Featuring Pusha T, Bun B, & The Cool Kids; Produced by Double-O
This is the remix to the song heard earlier in the album with a couple minor changes to it such as some added musical elements and the addition of some guest appearances. I was looking forward to reaching this track on the album as I really enjoyed the first version, but the remix sort of disappointed me. Bun B drops a nice verse, but this doesn’t really sound like his type of track. The Cool Kids fit well on this track because the production sounds similar to their own tracks. Pusha T does a nice job with a well delivered verse, but how long can you talk about cocaine and dope cause it seems like they do it on almost every song and album.

Bottom Line:
After listening to this album in its entirety, I have come to the conclusion that this is a better album than their debut album School Was My Hustle, but not really by that much. In saying that I mean that the albums are very similar in that the tempo varies much throughout and they both have their share of good and bad tracks. Kidz In The Hall didn’t really fall off or disappoint with this album, it’s just that they have the potential to produce a classic album and they have yet to do that with their two releases. I would definitely recommend purchasing this album though especially if you’re in need of a breath of fresh air from the mass of garbage songs and albums being released in the industry. KITH are definitely doing the rap game good in releasing an album of this quality and diversity displaying some real Hip-Hop music. Do yourself a favor and purchase some good music for a change…you owe it to yourself.