Kidz In The Hall – Land Of Make Believe [Review] 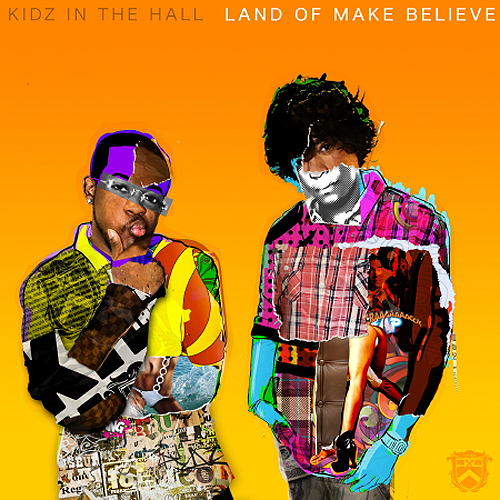 Kidz In The Hall have made changes on every album. With their debut album School Was My Hustle they were on the cusp of making a huge impact on Hip-Hop’s underground scene. On the sophomore album, The In Crowd, it seem they were ready to step up their profile (Including features from Pusha T, Travis McCoy, & Bun B) but still were overlooked even with the hit “Drivin’ Down The Block “. Now on their third album, Land Of Make Believe, rapper Naledge & producer Double-O look for another change in terms of sound. Gone now are the soul samples as we see producer Double-O make a sonic shift to synth heavy sounds and no samples. So did Land Of Make Believe turn out to be a change for the better? Let’s find out…

1. Intro
Produced by Double-O
In the beginning the first track has this sleepy feel to it. But as it progresses more instruments are added to make it really feel like your beginning a journey. Naledge drops line too: “Jill Scott said live life like it’s golden but Goldie said don’t be made at the chosen”. The album starts off on a good note.

2. Traffic
Produced by Double-O
The new sound direction is evident as this track is big on the synth. While there’s no problem with the beat (It gets better towards the end), the track as a whole doesn’t seem to go anywhere. Plus I could have doen without that hook: “Don’t get like Mike nigga, just get like me”. Average track. Coldhard of the group Crucial Conflict does the talking in the beginning and end by the way.

3. Flickin’
Produced by Double-O
This was probably the first track I heard off this album. I didn’t like it then and I’m still not feeling it now. The whole happy upbeat feel of the track really throws me off as well as the heavy Auto-Tune singing chorus. There have been songs like this that work but this one wasn’t done very well. Meh…

4. Out To Lunch
Featuring The Kid Daytona; Produced by Double-O
Minimalist production is used here. For a minute there I could have sworn this was The Cool Kids. This isn’t bad but for tracks like this, the lyrics have to take center stage. I don’t think Daytona and Naledge accomplished that here and track ends up boring.

5. Bougie Girls
Featuring Russoul; Produced by Double-O
Here Naledge big ups the upscale sisters. According to him that means reading books for Oprah’s Book Club, correcting grammar, and having good credit (Who doesn’t want a woman with a high credit score?). It seems like they were going for an anthem for these kind of women but it falls flat and sounds a little silly. The guitar riff on the beat is okay, but once again kinda boring.

6. Jukebox
Featuring MC Lyte; Produced by Double-O
Since I saw a video for this, I’m assuming that this is the first single. This is obviously aimed at the clubs (“Let me see you shake your little thang…”). I guess it works. I definitely like a little better after seeing the video (It’s not great but it helped). The beat sounds a bit dated; like “Can I Get A…” by Jay-Z dated. And where the hell was MC Lyte? Please don’t tell me all she did was that short ass hook.

7. L_O_V_E
Produced by Double-O
More synths here as well as more softness. Not to say that’s necessarily a bad thing, but the last three tracks have been like this and I don’t think it’s working. I’m was close to hitting the skip button there.

8. Will II Win
Featuring Marsha Ambrosius; Produced by Double-O
Finally. After three duds The Kidz bounce back. The track starts of simple but when the melody finally hits it makes the track complete. Plus you can’t lose when you have Marsha Ambrosius on the track. Naledge even sounds more inspired over this as he explains the struggle to get where he is now. Him talking at the end of the songs drives the point home even more (He also explains the album title). Check for this one.

9. Take Over The World
Featuring Just Blaze & Colin Munroe; Produced by Double-O & Just Blaze
Now this has the feel of an anthem. This is the kinda track you play to get inspired. Not to take away anything from Double-O, but this may have a lot to do with Mr. Justin Blaze co-producing the track. Colin Monroe provided the right voice for the hook too (Just Blaze with the Auto-Tune not so much). This is standout track.

10. Fresh Academy
Featuring Chip Tha Ripper & Donnis; Produced by Double-O
I know that Double-O previously said in an interview that the comparisons to groups like The Cool Kids & Pac Div were unfair, but the production on this track plus the fact that Chip Tha Ripper sounds a little like Mikey Rocks here, it hard not to compare this to a Cool Kids’ track. I happy to see Donnis get some shine here. Average track.

11. Simple Life
Featuring Amanda Diva; Produced by Double-O
This is basically Naledge singing on the whole track about “The small things we forget…”. I can honestly see this track being featured on Nip/Tuck (If you watch the show you get what I’m saying). At first listen I didn’t like this track but after a few listens, the sleepy production makes this very suitable for chill out time.

12. Running
Featuring Tim William; Produced by Double-O
Bouncy synth production here (Think Janelle Monae or Andre 3000). The track is okay but I’m still not sure if Naledge’s voice is right for this new direction. Tim William nails the hook and fits perfect though.

13. Do It All Again (I Am)
Produced by Double-O
Naledge reflects on mistakes of the past and how it would be if he could relive he past, “My selfish ways/I’ll never change/The lost of love/The price of fame”. Double-O provides a bigger sound this time and with the introspective of both the beat and lyrics, I’m surprise this isn’t the track they ended the album on. Still notable none the less.

14. I Am (Reprise)
Produced by Double-O
Over piano loop, Naledge spits what may be his best lyrics on the album; no hooks just him spitting for almost two minutes: “Please take heed/Still in the lead/If things get rocky then I’m Apollo Creed/Method to the madness/Smiling over sadness/Chip on my shoulder just from fucking with this rap shit”. This is actually what I was hoping for when I heard about the new sound for this album.

15. Rise & Shine
Featuring Russoul; Produced by Double-O
The Kidz end off on a good note with the last track. The songs puts a bow for the theme of the album (Land Of Make Believe = What you think fame is). Rossoul almost steals the show with his cameo (Which is much better than his first appearance on the album). With this track and the one before, they pick up the slack towards the end of the album.

Bottom Line:
Through most of the beginning of this album I thought that what Land Of Make Believe had to offer barely had anything interesting. Thankfully business picked up towards the middle and end. Kidz In The Hall should get a pat on the back for going in a new direction. But when trying new sounds, as an artists you has to remember what you are good at. This album wasn’t terrible but the sound they are going for is already being made better by other artists. You also have to note that Kidz are still trying to establish their brand. While there is some good music to check out here and this album may be liked by fans; some may want to get off the train before it heads to the Land Of Make Believe.