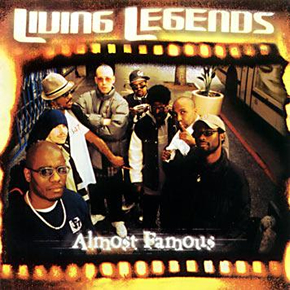 A while back I opened up my ring to the readers here to write a review or an article to be featured on the site. So far there has been a lot of talk, but no takers. Then, there was one. FEAST from taserdaily.com decided to step in and take up the challenge. FEAST is a regular reader who emails me pretty frequently about his opinions be they favorable or not so much so. He has offered up his take on a West Coast group for you consideration, check it out. Oh, and “the views featured in this article are not the opinions of nappyafro.com, Saule Wright, or nappyafro.com management. This feature is written by FEAST for your consideration.” Without further ado, The Saule Wright Invitational begins.

The Living Legends are an underground/independent Hip-Hop group out of the Bay Area. Consisting of Spunspot Jonz, Luckyiam.PSC, The Grouch, Murs, Eligh, Aesop, Bicasso, Scarub, and Arata (the cat who raps in Japanese). Almost Famous (a cliché title, but it works here) was put out in 2001 is heralded as their best collaborative work. It’s mainly an in house group CD; although Slug of Atmosphere makes a standout appearance on 2 tracks, and Pep Love of Hieroglyphics does the same on “Not Here”, in addition to a couple other West Coast underground heads.

1. Gotta Question For Ya
Produced by Eligh
The CD starts off with a sample from Carlito’s Way, then moves right into the chorus rapped by PSC. I find the chorus and the beat to be a little on the annoying side, but Murs, Scarub, and Grouch do enough to carry this track. Eligh’s presence on the track feels forced and awkward. Eligh’s stuff is hit or miss for me, it’s either great or not so tight – Especially with his flow.

2. Night Prowler
Featuring Slug; Produced by The Grouch
Slug gets the track started with some spoken-word-ish-poetry, but it’s tight (and turns out to be the chorus, just like in track 1). The beat is perfect, it just crawls along as, Grouch, Sunspot and PSC all kill it, but Slug shines and steals the show; “Now it’s time to make a friend/and see if I can make her laugh/Hey princess I got a lot of dialogue/So imma light it up for you to get high and try to follow.” Heat!

3. That Looks Good
Produced by Eligh
This is a pretty laid back, chill out track. The Grouch starts off the song with the chorus (3 times in a row they do that if you’re counting along at home). Bicasso makes his first appearance on the CD here. Everyone is just OK on this one, it’s not bad – it’s not great. Not one that I would just hit SKIP on, but not one that I’m bumping in the car either.

4. Black Glass
Produced by The Grouch
This is a very cool song with great production from The Grouch. It’s very introspective, kind of an odd duck, but a good track.

5. Rabbit Hole
Produced by Eligh
The Legends sample Jefferson Airplane’s “White Rabbit,” on this track about drugs and addiction. You might read that and say, “Ehhh White Rabbit? Really?” Trust me, It’s SICK. Eligh rolled the dice with this one; he slowed it down and added a nice baseline. If you held a gun to my head and made me pick my favorite song, I think it would probably be this one. This is THE standout track.

6. Common Ground
Featuring JC; Produced byThe Grouch
This is the only track on the CD that I’m really not feeling. Not much for me to say here.

7. Flawless
Produced by Eligh
This song starts off with a sample from Charlie and the Chocolate Factory “But I am different; I want it more than any of them!” Kind of another off-beat song. Not good, not great. A real jazzy feel.

8. What Would I Be
Featuring N8 the GR8 & Krush; Produced by Eligh
This one is all about fame and fortune. N8 the GR8 gives us the chorus: “Who would I be with money? /What would I do? /Would I stay true?” A common theme from The Legends; they’re always looking to ‘stick it to the man.’ An OK song, but kind of awkward.

9. Anything You Want
Produced by Sunspot
Another one I’m just kinda neutral on. Sunspot’s production is hit or miss for me. I find a reoccurring sound in the beat really annoying. Then there is some sort of weird xylophone noise. Eh.

10. Gift Wrap
Produced by The Grouch
This is another one of my favorites. It’s a great song with a slapper of a beat. They’re definitely big-upping hip hop. The Grouch (probably my favorite Living Legend), says it well: “Now it’s my profession and I’m wanting y’all to know/the love that I’ve got for this Hip-Hop only grows.”

11. War Games
Produced by Eligh
This is the “sucka emcee” track on the CD. Like every other underground rapper, they pretty much think most of the mainstream is crap/overpaid/overhyped etc. The beat is great by Eligh, second only to his production on “Rabbit Hole”. The rhymes are crisp and smart. Great track.

12. Forces of Nature
Produced by Eligh
This is a very cool track – a hip hop tag team, where all the members throw down 2 or 3 and then another Legend takes the mic. Excellent beat. My favorite line from the track comes from Scarub: “So many want to be fly but stand on shaky ground.”

13. Asaka Tales
Produced by The Grouch
The Grouch sets the stage with some sick rhymes, and then BOOM! Oriental flavor with Arata LAYING IT DOWN in Japanese. You haven’t EVER heard anything like this. Definitely a unique track, with an eerily-sick beat from The Grouch. The Grouch semi translates what Arata is talking about and drops this gem: we need to get y’all a Japanese dictionary or something! This was one my homies would always request in the car. It sounds crazy, but trust me, it all meshes perfectly.

14. Soap Boxin
Produced by The Grouch
This kind of a strange track. Eligh and Biccaso. It’s OK. Not a big fan of Biccaso.

15. Not Here
Featuring Pep Love & Jo Wilkinson; Produced by The Grouch
This is another real laid back song. The chorus from The Grouch sums it up nicely: “I’m gonna tell ’em that I’m not here/Ain’t taking no calls today/Time to refresh and do it all my way.” This is a good one; I’m a big fan of Pep Love.

16. Nothing Less
Featuring Slug; Produced by The Grouch
The CD concludes with another stand out track, and crazily, again, they start it off with ANOTHER Willy Wonka sample, ”We are the music makers, and we are the dreamers of the dreams.” Slug’s presence on the track is great. The track ends with a line from Scarub: “The outcome is legendary, and nothing less.”

Bottom Line:
He is right, this CD is legendary. If you’ve never heard anything from the Living Legends this is an excellent place to start. Overall, I give this a: