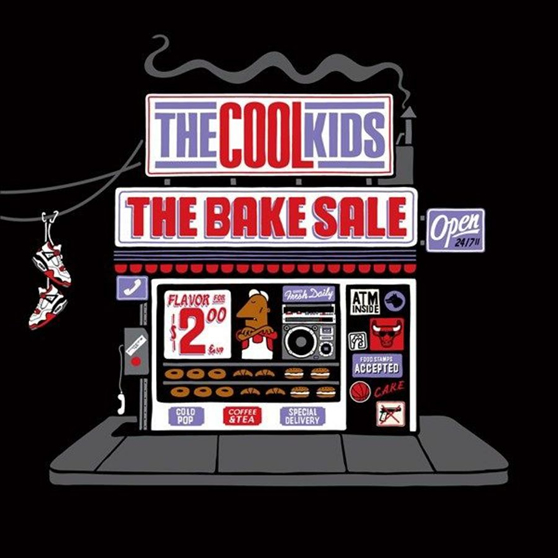 Obviously inspired by the 80’s Hip-Hop era, The Cool Kids have built up a buzz via word of mouth and the internet. Since their formation in 2005, the duo of Antoine “Mikey Rocks” Reed and Evan “Chuck Inglish” Ingersoll (Who handles all the production on The Bake Sale) have appeared in a Rhapsody/Tivo commercial, had their songfeatured on the show Entourage as well as video games NBA Live 08 and MLB 2K8, and was listed in Rolling Stone‘s “Ten Artists to Watch in 2008”. While their 80’s inspired nostalgic is fun (In music and in clothes; complete with tight acid wash jeans, retro tees, and Starter hats), it can be looked at as a one trick pony. They have recently released their second EP titled; The Bake Sale; it’s almost a teaser for they’re full length debut scheduled for later this year, When Fish Ride Bicycles. The Bake Sale gathers up songs from their previous EP Totally Flossed Out and adds some new tracks. While they are the toasts of some internet critics, can they back it up and span out more creatively? Or will they be another Cody Chesnutt (All build up and no delivery)?

1. What Up Man
It starts out a simplistic but distinctive beat that mostly drums and bass (But instead clap and bass, the beat actually has someone saying “clap” and “bass”. The actual lyrics are very reminiscent of and 80’s with subject matter about going to the grocery store and such. The 80’s were a simpler time weren’t they? At first, I didn’t like this song but after a while you see it’s just fun.

2. One Two
This song is bass heavy with a simple hook; “One two lace up my shoes/3 to the 4 when I stepped out the door/5, 6, kick a lil’ somethin’ with The Cool Kids then we do it again”. I’m still trying to figure out if it’s the actual music or the old school feeling that is appealing (Did that rhyme?). All in all the song is good. They throw in more 80’s references like ‘85 Bears and Byron Scott for good measure.

3. Mikey Rocks
On this, Mikey Rocks goes for dolo. I think this is were Cool Kids excel. Over a simplistic beat, Mikey sounds right at home; “Yes that song request, all I need is a mic and Inglish/Drop the beat all right I proceed to spit/Me and the beat start fighting with the snares and kicks”. Okay, while Rakim has nothing to worry about, this is way more that I expected.

4. 88
To a lot of people, this song could summarize what The Cool Kids is all about; them on their “88 shit!’. They seem to try to fit all the 80’s inspired drums and snares into this one track. The hook also jacks a line from Nas’ “Made You Look” (Nothing wrong with that). One problem I’m starting to see it that they use a lot of the same drums and production sounds on the almost every song. While this song is not bad at all, after hearing three previous songs that sound a lot like, it might throw some off.

5. What It Is
Damn, right after I accuse them of making beats too similar, they come with a different beat. Mikey and Chuck go back and forth with good results (They would make Run DMC proud). The hook is a little too effortless but it works.

6. Black Mags
The ode to BMX bikes. If you have heard one song by The Cool Kids, it’s a pretty safe bet that this is the one. The actual song was released way back in late 2007 and appears on their previous EP Totally Flossed Out. The minimalist beat and the screwed up chorus are both infectious; it’s hard not to nod your head. It’s been said before, but this song really could do to BMX bikes what Lupe Fiasco did for skateboards. The video is hot too.

7. A Little Bit Cooler
To me this beat is reminiscent of something the Neptunes would so. It here that Mikey goes solo again and let his detractors have it; “But I don’t get it though, about year ago you said my gear is wack/Nigga now my gear is dope, I guess it goes full circle like a Cheerio/Cause you rocking what I was rocking like a year ago!” The hook is kinda hot too. Yea, check for this one.

8. Gold And A Pager
All 1980’s suggestion aside, can you really still get a pager in 2008? I’m just asking. The one thing about most Cool Kids beats, no matter how simple, it that sometimes they bring you in with the progression; it’s always something added after a few bars or so. The song is not awful at all, but it recalls a lot for their previous workings (I know “Black Mags” uses lines from this song, but still). The song is still worth a listen.

9. Bassment Party
Oh shit! This song had me looking for some old Kilo, some old Raheem The Dream, and some other “booty shake” music (If you don’t know who I’m talking about…I’m sorry). It’s hard to not think of J.J. Fad’s “Supersonic” or Afrika Bambaataa’s “Planet Rock” when this song come on. To me, it’s more of an homage than an original song. Who cares? I like it.

10. Jingling
This song is real reminiscent of something you would here in the 80’s. Chuck and the beat even sounds like LL Cool (ala “Going Back To Cali” or “Jingling Baby”). He sounds good though; “I was trying to be modest/But I done brush my shoulders off so much in the past months they look polished/I’m just being honest/I’m putting on a clinic/Niggas dropping out of college to do it like we did it” More of the same, but still not a bad way to end the album.

Bottom Line:
With times the way are these days, everybody seems to be looking back to happier times. With heavy inspiration from Rap’s original Golden Age, I can see why people are saying The Cool Kids bring a breath of fresh air to Rap’s current climate. But is it really different? I think one great thing about The Cool Kids is the presentation more so than the actual music. Not to say the music isn’t good. I would of rated this review higher except for the fact that a lot of the songs were from previous compilations. But when all is said, I had a lot fun doing the review. Isn’t that the point?