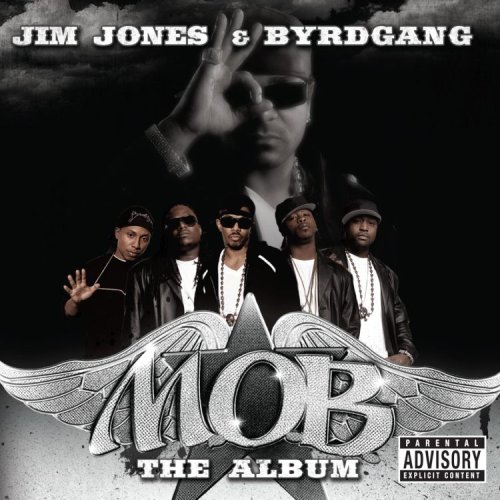 When I reviewed Jim Jones’ Harlem’s American Gangster album in February, I honestly thought that I had filled my Jim Jones quota for the year. Not to say that I don’t like Jimmy; he a charismatic fellow. With all the flack the South gets for not having intricate lyrics, it’s funny that a guy who is currently in the fore front for New York is lacking in that category. With all that bullshit aside, I think everyone is waiting to see what Jimmy does next. Well, for one he’s bringing in his own crew that’s not called Diplomats; ByrdGang. Its members consist of Jim Jones, Mel Matrix, NOE, Freekey Zekey, Chink Santana, Sandman, as well as recently deceased Stack Bundles (R.I.P.). After being a capo in the Diplomats, can Jim Jones lead this team to a successful official debut? We’ll see…

1. I’m The Man
Featuring Jim Jones, NOE, & Mel Matrix
The album starts off the album with an electric guitar laced track. Jones is first and gives you the standard ad-lib heavy verse. After him is NOE then Mel Matrix. If you haven’t heard or read about NOE, it’s they guy that sounds just like Jay-Z (In voice and flow). No lie. The song is average to me and does what it supposed to.

2. Mobbin’
Featuring NOE, Mel Matrix, Juelz Santana, & Sandman
The beat is hard on this one; the simple piano makes it sound menacing. Julez jumps on the hook and does his thing. And just to be clear, the Sandman here is not the same one down with The Clipse’s Re-Up Gang.

3. Only 17
Featuring Jim Jones, Stack Bundles & Mel Matrix
I really wasn’t feeling it at all when I heard how terrible the hook was. The beat has an annoying quality to it also. I will say this; Stack Bundles may have delivered the line of the album: “We don’t get breaks like 2 15’s and an hour/We sell 2 for 15 and move powder”. When you think about, it’s ironic to have Stack on a track about getting killed at a young age.

4. Blasphemy
Featuring Mel Matrix, Stack Bundles, Jim Jones, & Sen
The production on this isn’t really bad or anything; it’s actually good. It isn’t that the subject matter is old (Drugs, thugs, flossing, & sex is but I’m already over that). The problem I have is when you do something to death but don’t do it creatively. That’s the problem here.

5. Money Right
Featuring Jim Jones, NOE, & Sen
NOE begins talking in the beginning of the song and I’m still having a problem getting past the Hova impersonation (“I got my money right!”). Jim Jones tries out a faster rapping style that surprisingly wasn’t half bad. Sen sings his verse and NOE does the hook.

6. Throwin’ Bg’s
Featuring NOE, Sandman, & Chink Santana
When I first saw the title of this album, I wondered; what the hell was “throwin’ bg’s”? Well, the answer to that question is…I guess it’s some sort of ByrdGang gang sign (Correct me if I wrong though). This is another track that I feel suffered from an annoying hook. As far as lyrics are concerned, nothing much more than banter about having bottom bitches and money. Eh…

7. She So Gangsta
Featuring Chink Santana, Jim Jones, NOE, Oshy
The sad thing about this song is that in the beginning, it tells you what the “ideal bitch” is. Besides using the word bitch, I actually agreed with most of it. Now, that’s the good part. The bad part is the hook, the generic and derivative ass lyrics, and the fake ass southern accents.

8. Splash
Featuring Jim Jones, Juelz Santana, NOE, & Chink Santana
This was the first single for the album and I’ll have to admit that at first when I heard it I hated it. But after you hear that hook a few times, that shit gets stuck in your head (Seeing the video adds to this). The beat is simple and is probably one of the best on the album. Juelz feels like he wasn’t even trying hard but still easily outshines everyone on this track by leaps and bounds.

9. Hustle
Featuring NOE & Jim Jones
I know I should let this go, but even NOE’s ad-libs sound like Jay-Z’s; it’s crazy! More to the point, Jim Jones does the hook in a higher pitch for some reason. It’s sad because the beat really wasn’t that bad.

10. Oopsy Daisy
Featuring Jim Jones, NOE, & Mel Matrix
What’s up with Dipset members and funny words (You all remember “Holey moely”)? The song subject matter is actually more serious and deals with having an absente father; It’s like when you father threw you up in the air and didn’t catch you; that’s where the title comes from. The song has a deep message but it suffers from another silly hook and uninspired lyrics (And I feel like I’m repeating myself).

11. Heartbeat
Featuring Jim Jones, NOE, & Hell Rell
After you looked past the common R&B singer on the hook, the beat is okay. The song deals with repping for your hood/crew. Hell Rell (probably my favorite Dipset member) turns in a good performance; “It don’t looked cool with you the coup/Riding around the hood your whole crew on the stoop.”

12. ByrdGang Money
Featuring Jim Jones, NOE, & Mel Matrix
This song also appeared on Jim Jones’ Harlem’s American Gangster that was released earlier this year. I thought it was irritating then too. Skip!

13. Gizzang
Featuring Chink Santana & Jim Jones
Over a slow minimalist beat, Jones goes at it all alone (Chink Santana just does the hook). It works a little but then you realize that Jimmy really isn’t saying much. With a beat like this, it works better with a lyricist because all the attention is on his delivery and word play; you see why this might not work with Jim Jones.

14. We Flying
Featuring Jim Jones, NOE, & Mel Matrix
The bass line as well as the whole production on this one is pretty good. At first I thought it was the sequel to “We Fly High” (I still don’t know if that would have been a good thing). It had something that made me not really want to get into it though.

15. So Cold
Featuring Chink Santana, Jim Jones, & Sandman
We close the album with an ode to a chick that “suck a bomb ass dick”? Okay. I just didn’t think they would end this album with a song about a “down ass chick”. Well, the beat is a better quality but nothing that stands out (This is true for the lyrics too).

Bottom Line:
After listening to this album a few times, I realize what’s wrong with this crew (As well as a lotta crews in Hip-Hop/Rap). No one really stands out. I didn’t see any star quality in NOE, Mel Matrix, Chink Santana, or Sandman. I know most rapper wanna put on their homies and become moguls, but come on, it’s just too much of that shit. At the end of the day, this is a side project for Jim Jones and Dipset fans to buy until a main or more popular Diplomat member releases an album (Juelz, Jim, and maybe Cam’rom). Back to the drawing board Jimmy.