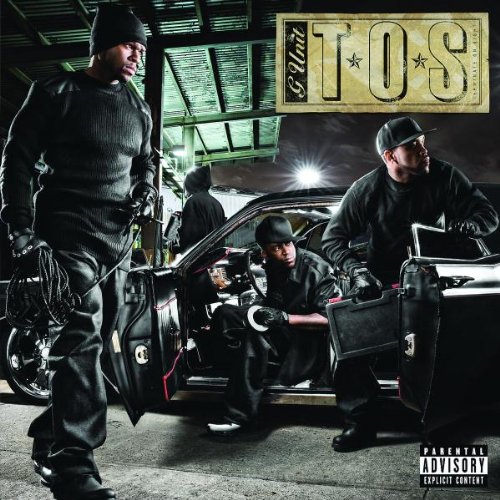 G-Unit knows how to stay in the limelight even when they have no album out. The shit with Buck, the court situation with 50 and his BM, Yayo and his prison shit, etc. Kanye beat 50 in the sales challenge but 50 did major numbers out the gate as well, however, the bet was that 50 would not do another solo album if he lost…and he did. What does that mean for him or the crew to come off such low times as mentioned? Let’s find out.

Straight Outta Southside
Produced by Ron Brownz
This is one of the hardest songs out. Get yo’ throwback on as the crew pays homage to NWA and that gangsta mentality that initially got the crew over. Banks gets the baton first and does aite. Yayo seems to be more energized in the booth as he shouts a fuck the police to Shawn Bell’s murderers. 50 does aite as he tries to keep pace after Yayo’s verse.

Piano Man
Featuring Young Buck; Produced by Tha Bizness
Yayo seems to have upped his swagga game and Banks is a fool; straight comedy on this one from the thugged out Craig David. Buck does his thing on here. Not a member, but the best one on this track by far with some decent wordplay and brash delivery. The track itself is aite; the hook is, well, 50.

Close To Me
Produced by Teraike “Chris Styles” Crawford
I didn’t expect to hear this type of song this early after the first two singles. Fiddy knows how to make songs for the ladies and strippers to work…so I guess that means that he makes music for the men? Anyway, nothing groundbreaking but for Curtis’ fans, this is a welcome return to some older sound. Banks styles on this shit quite well. Shout out to Spitzer on here; Ha! And the falsetto shit is comedy. I dig the track and trust me, this song will thump in the clubs…strip and otherwise.

Rider Pt. 2
Featuring Young Buck; Produced by Rick Rock
Voice mods, oh joy. That aside, song is pretty dope. 50’s verse is forgettable and Buck seems to really seal his own casket with the crew on this one even if 50 drops me I still wouldn’t sign. The beat is dope and there is no denying this is a posse cut.

Casualties Of War
Produced by Ky Miller
The hook grates my soul, I hate it. The track, eh, it’s aite. Banks comes on and intros his flow saying some pretty lame shit. Overall, the metaphors are pretty lame on this one and even for the crew; this one is pretty pedestrian lyrically.

You So Tough
Produced by Ky Miller
The hook with the mocking tone is funny as hell. I think Banks mailed this one in, not really a good sound for him at all on here. Yayo comes with some heat on this one and amps up one of the more mellow tracks on the album. I think 50 is goin’ at T.I. and his case on this one, for what, I’m not sure. Lyrically though, this track is pretty grimey and I dig it, even if you omit Banks verse.

No Days Off
Featuring Young Buck; Produced by Dual Output
Buck offers up part of the hook on this one which sets the tone for the track. Mr. Jackson comes on with a slow burn flow, because in the offset, it sucks. It does get better as he goes on. Yayo’s verse is pretty fly until he starts talking about his ride and a bulletproof hat. Ha! Banks paints the best picture and takes shots at Fat Joe and Weezy.

T.O.S. (Terminate On Sight)
Produced by Ty Fyffe
We get 50’s hardest verse since the first track with lines like “It’s fuck 50 I stay in the drama/He luv her I fuck her/She’s  his baby mama.. ” Damn 50. Banks rides and delivers on this track, hypes it up a little. Yayo does him one better bringing this shit to a frenetic pace that matches the track. The track, though simple, works well on here due to the deliveries brought to the table.

I Like The Way She Do It
Featuring Young Buck; Produced by Street Radio Inc.
Summer jam much? This is a club banger. A lot of you dudes need to thank fiddy. If you club and you  like women, many of you will get yo’ grind on to this very song. No women sittin’ when this shit comes on, I promise.

Kitty Kat
Produced by Hit-Boy
Um, what is this, a woman’s anthem or something?  The chic on here is annoying as hell. The track is fuckin’ phenomenal, but yo, the hook is terrible, just terrible. I can see the squad groovin’ to this one in the studio though, having fun. Lyrically, there’s nothing new here, money, cash, hoes. The track is the biggest standout here though.

Party Ain’t Over
Featuring Young Buck; Produced by Damien Taylor
Yep, another club jam. The beat is dope; you can’t stay still on this one. The flows, again, aren’t anything new or groundbreaking for the group. Almost to the point, the song sounds familiar. Banks seems to have the idea on how to ride the tracks on this album and he does a good job on here as well.  Buck talkin’ about he got Vitamin Water money seems to be included on here like they poking fun at him. You got money….like yo’ boss? WTF.

Let It Go
Featuring Movado; Produced by Don Cannon
I’m feelin’ this from the jump. Movado kills it and the track is undeniable.   This is one of the better songs on the album.  Yayo delivers a dope ass verse including, “I’m the high school drop out/Crack game genius/The mack will turn ya back into Gilbert Arenas.”

Get Down
Produced by Swizz Beatz & The Individuals
There was a time when having Swizz produce your track meant damn near instant Gold. My how the times have changed. This song is horrible.

I Don’t Wanna Talk About It
Produced by Jesse Corparal Wilson & Reginald “Regg” Smith
I love the track on this one, some bounce with heavy synth. It sounds like some Ryan Leslie produceduction as it has a lot of layers to it. Its comical how this song is one of the longer, if not the longest, on the album. I really like the concept and flow of this song a lot. 50 brings the best verse on this one.

Ready Or Not
Produced by Jake One
A dark track that may be a little overly simple is paired with Banks best lyrics on the entire album. “Cause niggas get hit, and call a lawyer/Gon’ try and sue you/That’s a bitch nigga for ya’/….why be slick, say somethin’ bout my name/Don’t jump out the window/Ya safer jumpin’ out a plane….you don’t want a lead shower/Stay the fuck out the rain/So much ammo/Muh’fuckas don’t gotta aim.” Yayo offers up a decent verse, but it’s hard to follow up what Banks gave us.

Money Makes The World Go Round
Produced by Ron Browz
Yayo makes the hook more annoying than it has to be, and it’s equally bad having him doing the first verse on the song that he does the hook on. Stuck like Velcro? Damn, we gotta do better than that though. The track is about average. It sounds like its all build up and is missing something extra.

Bottom Line:
There isn’t much elaboration needed. The album goes from hardcore banger to slow and methodical in a largely inconsistent feel. I think ultimately, this one will come down to what you like to listen to.  The crew doesn’t reinvent the wheel outside of Yayo who seems to a lot more energized overall, but seems to struggle to find where he fits in.  50 offers up a lot more forgettable verses than you would expect.  Banks, on the other hand, keeps it live with his change of flows and pretty good lyricism for the most part.  Buck, when featured, is a welcome change to the sound of the crew and I think will be missed when all is said and done.  Overall, it’s a little better than ya’ average album that would be better if not for the inconsistencies and smattering of mediocre songs. TOS does nothing new or groundbreaking but does show glimmers of them reclaiming that juggernaut status that once had the world saying G G G G – Unit!