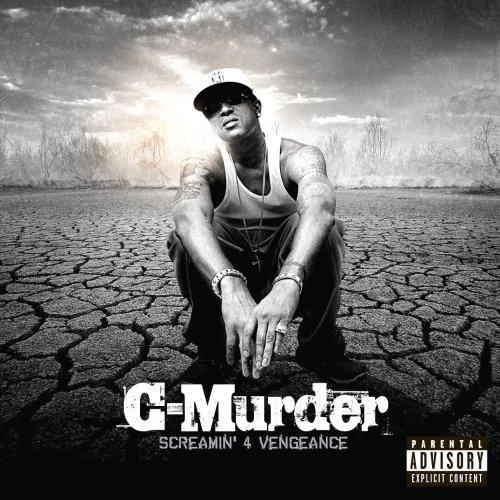 Rewind the clock back ten years and you have C-Murder sitting atop the Hip-Hop world with a platinum solo album, a double platinum album with his brothers in the group TRU. Millions of dollars at his disposal and had the whole world screaming “NO LIMIT SOLDIERS!” Fast forward to real time and what do we have, C-Murder has served a couple of years for an alleged murder that he denied his involvement, the downfall of No Limit Records, and a wedge drove between the once tight knit family. Not is all lost because C-Murder returns to the lab to bring us Screamin 4 Vengeance. It wasn’t too long ago that C-Murder was shooting videos while incarcerated, but now that he’s on the outside, he doesn’t have to worry about that anymore.

Intro
You have Ice-T talking about the mean streets of the N.O. If you haven’t seen the DVD where this came from, you need to check it out.

I Represent
It starts off with a SICK beat that C-Murder gives you some of his gutter rhymes over. This is song is definitely a BANGER! Sounds like the C-Murder that we are used to hearing.

Be Fresh
Featuring Detroit
C-Murder ups the tempo on the flow, and surprisingly he rides the beat pretty well. I guess you can call this a club song. Not what you would expect from C-Murder, but it works for him.

Posted On Tha Block (Remix)
Featuring Mia X, Krayzie Bone, & Papoose
Your eyes aren’t playing tricks on you. Mama Mia returns and shows that she hasn’t lost a step. The song is TIGHT. Pap and Krayzie put up good verses, but I have to say that this was Mia’s song.

Mihita
Featuring Mia X
This is a love song about a pistol. The beat is on point and once again Mia and C hook up to make a good song.

Gangstafied Lyrics
The production on this album continues to be good, and this one is no exception. C-Murder gives us exactly what the title states. Gangsta lyrics and bass pounding beats that C-Murder fans will love.

Streets Keep Callin’
Featuring H Double
C-Murder takes it back to the N.O for this one over a smooth beat that he does damage to. This song is HOT! This takes you back to the 504 Boyz days.

My Set
This is one of those songs that you might hear your local trapper blasting from his car. “I’m up early in the morning with them pigeons, all night I been cookin up in the kitchen!” The beat is simple but it’s so hard.

Beastmode
Featuring Verse, J. Lyric, Sincere Sosa, & Chieffa
The production on this one is awesome. C keeps it coming with the gutter material along with the crew on this one. BANG THIS ONE!

Cuttboyz Anthem
Featuring Cutt Boyz, Verse, Max Minelli, and G. Dinero
C-Murder gets lyrical on this song, but don’t get it twisted, he still brings that cutthroat music that we’ve gotten accustomed to. The production will have you bouncing like its 1998 again.

Freeze (Ice Man)
Featuring Max Minelli
This might be the first slip up on the album. He’s talking about robbing people on this one. I guess you can say this is a soundtrack for robberies. Some might like this one, I don’t.

Down South
Featuring Slim Thug and C-Loc
Slim Thug drops by to drop a verse out on this one and the song is pretty tight. C-Murder continues with the hardcore lyrics, and Slim Thugger and C-Loc put up some decent verses.

Bottom Line:
Can you knock C-Murder for sticking to what works for him? No. He went back to what works for him, gutter lyrics and pounding beats. I wasn’t looking for him to be as lyrical as his fellow New Orleans native Jay Electronica. C-Murder pulled out the blueprints of what he used to do and went with that. The result was a good album, might not be received by the masses well, but down south the boys will be listening to this one. C-Murder has a cult following similar to that of Soulja Slim, dudes are going to listen to him no matter what. I was surprised that this album was this good.