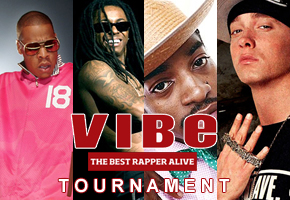 I was on the internet and I saw a thing Vibe was doing to settle once and for all who is the best rapper alive. They made a bracket type thing to have the readers vote on who is the best; it’s like the March Madness brackets. They’ve got the four brackets based on some of the legends in Hip-Hop: The Notorious B.I.G. Bracket, the Tupac Bracket, etc. On the surface it seems cool, right?? WRONG!!

Vibe seriously fucked this up! Man, this could have actually been the official thing to prove who was the best rapper alive, but I’m like “what the fuck” for real! They had the nerve to put niggas like Soulja Boy and Rich Boy on here, but no mention of Freeway, Young Chris, or Blu. Not to mention they seriously messed up the match-ups: Shawty LO versus T.I.? We all already know who won that, but maybe the votes will snap Shawty LO back into reality. Kanye versus FOXY BROWN!?!? Oh come on!

But you really can’t fuck with these match-ups: Jay-Z gets a BYE!! (He either has to go against Jim Jones or Diddy…). He’s too good for that! Then in the second round, he goes against Lauryn Hill!!! How ’bout Missy Elliot versus Lil’ Mama! Or Mos Def versus Talib Kweli! Lil’ Wayne versus Trina! I could really go on and on, but you can look at these fucked up match-ups yourself.

You can look at the brackets here

Below, I made a list of rappers that got robbed. I didn’t get everybody, but I got a quick list off the top of my head.

Freeway: You got Soulja Boy and Rich Boy up there, but this nigga has serious skills and they overlooked him! Two albums out, in the game for almost 10 years…

Blu: He’s got more skill than most of the niggas on that list, and that’s real.

Styles P: Man, where the fuck was he?? I can’t believe they overlooked him. They had Jadakiss on there, but they forgot P!

Rakim: Do I have to say anything here? He’s still alive people!

KRS-One: No Words here either…

Vibe seriously fucked up on this one. Here’s my prediction:

That’s a realist prediction. Personally, I think either Jay-Z or Nas is the best rapper alive, but Lil’ Wayne is going to win, and we all know that. And if he does, it truly shows how fucked up Hip-Hop in my opinion; that a rapper with no classic albums under his belt (unless you consider C3 classic…yeah, right…) could take it all away from 3 rappers with at least 3 classics under each of their belts. Just my opinion though.

You can vote right now to see who is better right now out of Jim Jones and Diddy. So far, Jim is winning…yeah. Anyway, if you want in on this, go to Vibe.com and vote starting July 21st. Let’s see how this plays out: any predictions?