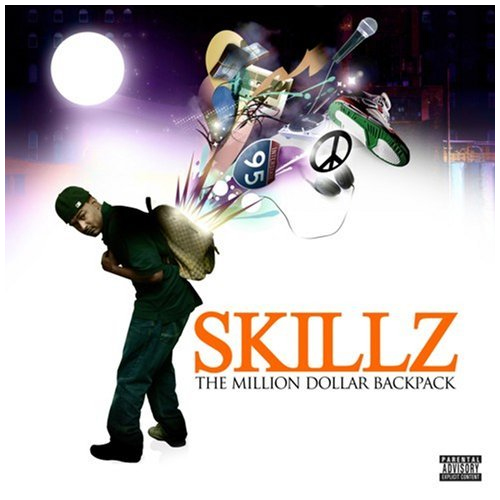 Somehow, one of the more talented lyricists had been reduced to one hit a year, the “Rap Up”. It’s not all bad, a lot of folks learned who he was by the yearly recap…sadly, a lot of former fans lost love for him over them as well. This offering enlists the help of some HUGE names including Kwamé, DJ Jazzy Jeff, Common, Talib, Black Thought, and Freeway. Let’s see what’s in this backpack.

Million Dollar Backpack (Intro)
Produced by DJ Jazzy Jeff
The bass reminds me of “Cool Like Dat”; cool, laid back, and groovy. A few quick sound bites (interview style) and we are laced with some flow by Skillz. For those of you new to Mr. Mad Skillz, he name drops…a lot. Nothing new as he calls Ye’ out in the first 5 words. The rest of the flow is just as good, I don’t know how I feel about the “phone call” setting of the lyrics. Otherwise, it’s a nice intro.

Where I Been
Produced by Jake One
The number one response to “You getting’ that Skillz album?” has to be, “Yo, where he been man?”  Well, listen here and let him tell you. “Don’t ask me where I been/Ask me where I’m goin’ /You best believe I’m somewhere flowin’ /And I’m doin’ what I love to do/And when it comes out trust me, you’ll love it too.” Skillz flow on here is upbeat and pretty well matched to the track provided by Jake One. Its up-tempo and very grown up. This is a really cohesive sound including the singing on the hook.

Don’t Act Like You Don’t Know
Featuring Freeway; Produced by Ivan, Orthodox, & Barias
Sometimes, cameos require the guest to flow on a song that may not really be the norm for them. This track is very Freeway. Don’t let that throw you off though; Skillz changes his flow up again. His name flippin’ is on serious display with his first 2 lines where he weaves Big and Pac in name/song as he likens himself to the two legends. Freeway brings his signature sound to the song and doesn’t half step on this one at all. The track has a chant of the title of the song on repeat over a bouncy, energetic track. The energy of this one doesn’t get old even if you heard it a while ago when it leaked. This is one of my favorite complete songs on the album.

So Far So Good
Featuring Common; Produced by Usef Deniro (aka Joe Money)
My first gripe out the gate is that this song seems even slower and more mellow when put after the previous song. That’s not a good idea, in my opinion. That aside, the track is okay. It’s a nice groove, but it gets a little boring as the song plays on. I think a lot is lost in translation with this because of the previous song, but while they lyrics are there, the deliveries for this song come off as lazy. Again, I know this is ONLY because of the arrangement of the album and not the song itself. I went back and listened to this song without hearing the one before it, and it stands up well. This is good song.

Sick (The Sequel)
Produced by Kwamé & A Kid Named Cus
The track comes on and honestly, I’m tired of it instantly. It sounds like a simple loop with no build up or extra, just track and flow. That’s a shame too because this song is really a good showcase of Skillz, well, skills. He lets us know how long he has been in the game, how good he is (and has continued to be) and gives you names to back it up. “I was sick before you, could count your bars/I was sick before Run and Blade were TV Stars/I was sick before the South had hits/Sick before you knew how to download something like this”. He calls Jeezy out for a second time here, not sure what that is about, but not only is it Jeezy by name, its Jeezy and his ad lib game. Lyrically, this is what Killer Mike’s “I’m The Shit” should have sounded like.

(For Real) He Don’t Own Me
Produced by Bink
Bongos and a little Caribbean flavor give this track a good grade. I like the summer feel and the little changes in the music as it plays on. The singing on the hook follows the story of a young lady that is giving our man Skillz the rhythm while being with someone. Guys, by default, you need to be loving this jam. I don’t know if it is a song for the ladies, or a song for those of us that KNOW this situation. Either way, it’s a winner to me. The storytelling aspect of this one is just so damn dope. This IS my favorite song on the album. I’m old though, so don’t mind me.

My Phone
Produced by Fusion Unlimited & E-Flat
Young rappers, take note. The creativity of this song is fantastic. The song is about, as the song states, Skillz’s phone and all the celebrity women in it (From Nia Long, Lauren London, Gabby, Fergs, Halle Berry, Joi Bryant, Serena and Venus, Nona Gaye, Ms. Good, etc). He weaves in some movies and songs with the stars as well as gives us an ending that the fellas will feel. The track is very simple, but I can’t mark against that because I think anything complex would take away from the song. This is a very good song.

Yeah Ya Know It
Produced by Khari Ferrari & Skillz
OKplaaaaaaaaayer is the intro as the futuristic sound and head noddin’ drums come in and provide a decent base to build this song on. There is nothing spectacular about this song. It’s not bad, it just doesn’t stand out.

Hold Tight
Featuring Black Thought; Produced by ?uestlove & James Poyser
The Legendary bless us on here. They add some serious depth not only to this song, but the entire album. We get some dope drums, horns, and simplistic bliss. This is one of the better produced tracks on the album. Skillz manages to flip his style yet again to keep up with the delivery of Thought. Both offer up some fly verses and witty wordplay over a song about making it through situations. I think the hook on this one could have been better, but the song is still pretty dope.

Crazy World
Produced by Kari Ferrari & Skillz
I immediately think of “Mighty O” by Outkast because of the HBCU band sound of the track. Skillz gives us another flow as he pontificates on the state of affairs in, yeah, this “Crazy World”. The juxtaposition of the fun, toe tapping sound of the song and the serious subject matter of the lyrics works. I guess they balance each other out, but I normally don’t like that kind of coexistence. Maybe I am giving him a pass…works for me.

I’m Gon’ Make It
Produced by Bink
The organ like chord intro dramatically brings you into what seems to be a monumental song. It doesn’t build like I thought it would. The song pretty much stays right there where it started. For the rest of the song, I sit waiting for “IT” to kick in…but it never does. Lyrically, the song is an inspiration about perseverance. Yeah, how boring, another positive track, how dare he. The song is good, I think the production, as mentioned, leaves the song a bit on the table, but lyrically, it’s Skillz. He doesn’t seem to let up no matter what track he gets.

Be Alright
Produced by Fusion Unlimited & E-Flat
I would like to introduce you to “Today Was A Good Day” 2008. Like a few other songs on this album, this is grown man summer music. It’s nothing but good times and fun. “Hit the dice game up, a coupla’ dudes might hate/Just left Ms. Ruby’s, got me a plate/Drove right past the cops, ain’t make a mistake/Made a left on Main, hit a right on 8th/Had a chick on Main, had a chick on 8th/They call, I don’t answer, I don’t want no mistakes.”

Hip Hop Died
Produced by Khari Ferrari & Skillz
“Hip Hop is Dead”…folks have been saying this for a minute. The Fuck Hip Hop intro verse definitely gets your attention. Don’t worry; Skillz is building his song, as usual. He does a great job of weaving reality and rationality when he flows. Bringing up some other legends in their own fields and the way they did what they believed in no matter what folks said. It’s widely believed that this is a response to Nas’ Hip Hop Is Dead but I sincerely hope not, it’s a tad late, even if relevant. The blues trumpet on here may get overlooked, but it adds (as some older folks say) some teeth to the track. This is a pretty thoughtful song here. The message is deeper than you would expect.

Preaching To The Choir
Produced by Jimmy Slim Rose
Jimmy gives us a pretty chill track; nothing spectacular. It has some church chords and some well played choir singing in the background. Skillz dances all over this one again as he weaves a story about marriage, church, and trust. No murder, just all out storytelling. This is a great way to finish the album.

Bottom Line:
Skillz is one of the few rappers that actually embraces the title of backpacker and wears it like a badge of honor. He represents it well with lyrics that swerve far left of your favorite radio stations play list, but at the same time, trumps them in creativity and skill. My only gripe with this CD is that the production is fairly uncomplicated and laid back, almost too much. I think a little more variation in sound of the music would have served this album well. Lyrically, Skillz keeps you on your toes with his ever-changing flow and subject matter. All in all, this is an album that I appreciate a lot more because of my age and the subject matter than I would if he rapped about something else over the same production. A lot of folks have been saying that there is no grown man music in today’s Hip Hop. I say, check in Skillz’s Backpack.