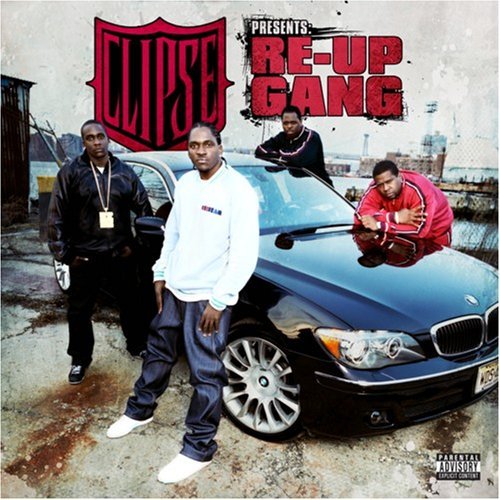 The Clipse are often a slept on Hip-Hop group, and most of the time, the artists in Hip-Hop that we sleep on are usually the most clever and are arguably the best, while we bow down to Lil’ Wayne, Jay-Z, or Nas for best rapper alive. People like Lupe Fiasco, Crooked I, AZ, and Clipse all fit into this mold.Now, after about 4 years grinding with the mixtapes, The Re-Up Gang album has finally dropped. Even though I’m a youngster, I still picked up Hell Hath no Fury in ’06, and I was impressed. Let’s see what they bring to the table this round.

Re-Up Gang Intro
Produced by Sleepwalkers
Now THIS is how you start an album. A little bit of talking in the beginning, just so the listener knows what you’re about, and then just straight fire for the next 3 or so minutes, accompanied by a beat that is effective and works well with their flow. All four of these guys turn in awesomely lyrical verses, and leaves you wanting more. I’m really liking this one, definately one of the top tracks, and it keeps me open-minded for what’s to come.

Million Dollar Corner
Produced by Sleepwalkers
The beat here was made to be a banger, but it’s ruined by the awful hook: “I got a million dollar corner…million million dollar corner…” OVER AND OVER AGAIN. But if you can get past that, then this track is sick. The hook keeps it from being a certified banger, but the lyricism on here is on point, so this track is decent overall.

Street Money
Produced Karl Maceo & J. Storm
“All this street money…so much street money…”. Are these guys serious? The beat is pretty wack too, I’m just not feeling this one too much. Their lyrics are on point, but everything else works against them, which make this a SKIP!

Fast Life
Produced by Scott Storch
The first single off the album, definately one of the top songs. Ironically, it ONLY features Clipse! The beat is hot, and of course, the lyrics are rewind-worthy. They also made a good hook, the first of the album so far. You’ve gotta check for this one; they really did their thing on it.

My Life’s the Shit
Produced by Illfonics
YES! This track is good too. I love this track; the beat is banging! It’s also only 3 minutes long, which is good; the songs on this album are sometimes too long for their own good. The lyricism doesn’t lose it’s steam here, and the beat works with them, and hook is great, which makes this track, in the words of King Jerm, A CERTIFIED BANGER!

Bring it Back
Produced by Sleepwalkers
And the quality goes back down. This track is exactly the same as “Street Money”, so do the same thing here: SKIP!

Emotionless
Produced by Sleepwalkers
Now I’m feeling this one. Even though the track is called “Emotionless”, the beat portrays so much emotion, as the Re-Up Gang raps about not being able to show any emotion. The hook here is even worse than the other ones because they actually try to sing, which would bring the entire track down if it wasn’t for this incredible beat and the consistantly amazing lyrics that are thrown out at you as the track goes on; it sort of feels like a throwback to “My Type” by T.I. from T.I. VS T.I.P, and that was one of the only hot songs on that album. Check for this one.

We Know
Produced by Sleepwalkers
By far one of, if not THE, best track on the album. This is the banger of the album; the beat is crazy, and the guys I guess decided to ditch hooks altogether and just focus on the lyrics, which is fine when you have an amazing beat like this one. The hook is a simple: “We know…” which is uttered once in between two triple-A verses given by one-half of the Re-Up Gang. If you just installed a stereo system in your car and want to test it out, play this song and turn the volume up. BANGER!

Money
Produced by Karl Maceo & Johnny Fuego
This is what that song “Street Money” should have been. A simple hook that works with a nice beat. Once again, the group hits you with lyrics that go over your head numerous times, but still this can be a bit much this late in the album; it’s almost making my head hurt, but in a good way! Anyway, this is good song, and most likely the second single off the album.

Been Thru So Much
Produced by Sleepwalkers
The obligatory reflection song that is on most of the albums that rappers put out nowadays, this song is pretty much the same as you heard before. The lyrics are amazing here again, but it’s almost too much to take in, especially when it comes from four different people! Still, overall, it’s an average track with a decent beat.

Still Got it 4 Cheap
Produced by M. Bang
This song was good, but I had to skip it after I heard this one line that one of the rappers rhymed with “Dookie”. I can’t believe that; after all the lyrical talent that they have here, they use dookie as a rhyme?!? After I went back and listened to it again, the beat is slow and nice, and the other rappers turn in OK performances, but I think they are getting tired at this point. If you can get past the dookie line, it’s a decent track.

Show You How to Hustle
Produced by Sleepwalkers
The group ends the album on a good note here. I like this track, the beat is great, and the hook is probably the first one I was actually singing along to. Definately one of the better tracks on the album.

Bottom Line:
Overall, a good album for The Re-Up Gang. I mean, lyrically, I’m taken aback by them; they are all just too good, and rewinded like 4 times per song I think. But the only problem with constant lyricism in a group like this is that there are four members of the group, so if all four have to turn in stellar verse after steller verse with hidden meanings, double entendres, and vocab heavy lines, it just gets to be a bit much. I was really dissapointed with the what they came up with for the hooks: you’re telling me you can flip rhymes like: “I’m not nice, sort of rude to the neighbors/I trick on them hoes: Memiors of a Geisha“, but can’t make a decent hook!?? The production on here was good, but only when it worked with them; they didn’t do well trying to work against a faulty beat. Overall, this album is a decent debut for The Re-Up Gang, even though it does have a few glaring errors.