The Kings Of The South: “Wish You Would” 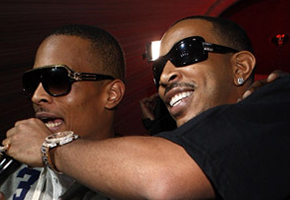 As soon as I heard a track called: “Wish You Would” with Luda feat. T.I., I had to make this post. Their battle has raged on for as long as I can remember; it wasn’t even direct, but mainly subliminal most of the time, starting when T.I. called himself “King of The South”, a title which has caused tons of controversy with other Southern artists. Still, the only one that looked to seriously test that title has now joined forces with Tip for his album, Theater of The Mind. This is crazy! It reminds of listening to “Mr. Carter”: as soon as I saw the people who were on it, I jumped on that shit. Anyway, see this track for yourselves, it’s hot as hell, and it goes really hard. And one more thing: if T.I. can make a track like this, why is Paper Trail coming out with all this commercial shit? Damn! Naturally, you’re going to want to know who won. Listen for yourselves, but I think Luda won, even though he got 2 verses and T.I. only got 1. You tell me who you think won.