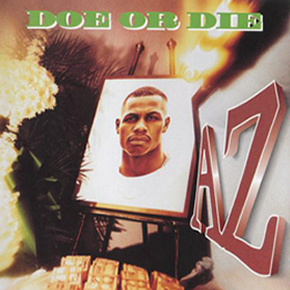 Succeeding Nas’ classic album Illmatic in 1994, AZ released his debut album that would go on to be deemed classic material upon its release. In being released in 1995 along with Raekwon’s classic debut album Only Built 4 Cuban Linx, many say that these were the two premier albums that introduced Mafioso rap to the industry. After AZ’s incredible verse as a guest appearance on Nas’ song “Life’s A Bitch”, many listened in wonder as to if he could keep up the skill and ability that he displayed. To his success, AZ was able to further up the ante and show the world why he is proclaimed as one of the premier lyricists in the rap game.

Intro
Produced by AZ & Lunatic Mind
Right off the back AZ provides a great Intro track that gives you a taste of what’s to come as the album proceeds. AZ and Lunatic Mind produce a dark, grimy sounding beat that serves as the perfect compliment to theme of the album.

Uncut Raw
Produced by Loose; Co-Produced by AZ
The following track continues in the mood that was set with the introductory track, as Loose and AZ handle the production side with great skill. AZ’s skills are in abundance as he displays his lyrical ability in rapping about the street/Mafioso life and the continual hustle that takes place in environments they reside in.

Gimme Your’s
Featuring Nas; Produced by Pete Rock
This track features some early classic production by the soul brother Pete Rock that fits well with AZ and the lyrics that he’s spiting. AZ rhymes about everything in this world that he wants and has his eyes set on acquiring. The chorus features some crooning from Nas that gives the track a unique style and feel.

Ho Happy Jackie
Produced by Buckwild
I remember when I first heard this track I was immediately an avid listener of it. Buckwild produces a classic beat with the sampled “Little Children” by Kool & The Gang. I went and searched for the original record by Kool & The Gang that featured this song and listening to it just gave me a complete appreciation for this track and for production/sampling in general. AZ drops some great rhymes that warn guys to be on the lookout for the gold digging chicks (“Ho Happy Jackies”) that lurk around every corner just waiting for a dude with ends and money in his pocket.

Rather Unique
Produced by Pete Rock
Earlier in speaking about how Nas’ inclusion on the chorus on “Gimme Your’s” gave that track a unique feel, AZ displays on this track why he is so unique as an artist for his lyrical dexterity and verbal presence. Pete Rock provides AZ with some more classic production on this track that showed why he was such a force to reckon with early in his career. The boom-bap of the kick and crisp snares and drum rolls display why Pete Rock has such a signature sound that has been so hard for other producers to match.

I Feel For You
Produced by Amar; Co-Produced by AZ
This track brings up the tempo and pace of the album as Amar and AZ provide a nicely produced beat that sits well with AZ’s lyrics. While this isn’t perceived in the same way as the previous classic tracks before this one, it is still able to hold up and match them in terms of lyrics and production.

Sugar Hill
Featuring Miss Jones; Produced by L.E.S.
The previous track gives way to this absolute classic track by AZ that features now Hot 97 radio personality Miss Jones singing on the hook. L.E.S. provides some great production on this track for AZ to flow effortlessly on while being compatible with Miss Jones’ singing. This is probably one of AZ’s most notable tracks and it’s easy to see why after listening to it.

Mo Money, Mo Murder (Homicide)
Featuring Nas; Produced by D.R. Period
For all you so-called “Hip-Hop Heads” that hear this beat and immediately think about The Diplomats song “Real Niggas” on Diplomatic Immunity…DO YOUR HOMEWORK!!! This song by AZ featuring Nas is the song that made the beat classic as they picked up from their first collaboration and deliver yet another great performance together. When listening to this great song displaying their storytelling abilities, you can get an early feel for their Firm days and songs like “Phone Tap”. Even though B.I.G. was on point when he said “Mo Money, Mo Problems”, AZ was even more correct with his statement of “Mo Money, Mo Murder, Mo Homicide”. In the Mafioso world according to movies like Scarface, Carlito’s Way, and American Gangster, the more money that you start to make leads to more murder and death occurring usually being your competition and rivals. This song, along with the music video that accompanied it, perfectly delivers this message to listeners. The hidden track “Born Alone, Die Alone” near the end of this track is a great addition and I wish it would have been a separate track on the album.

Doe Or Die
Produced by N.O. Joe
Now we come to the title track on the album and it is a great song. The funky sounding beat produced by N.O. Joe gives the album yet another feel as AZ rhymes about how it’s either money or death in this world. The concept of “Doe Or Die” is basically the same thing 50 Cent was conveying with his theme “Get Rich Or Die Trying”. They both are great themes to live by in this world as a means to staying motivated and on your grind to make things happen for you in life.

We Can’t Win
Featuring Amar; Produced by Amar & AZ
The dark, piano and bass driven beat produced by Amar and AZ is suitable as they both deliver lyrics speaking about how the world makes it hard for them to win at life and overcoming the difficulty is an everyday struggle. It’s ironic how some of the things that are spoken about in this track still apply to the world today 13 years later.

Your World Don’t Stop
Produced by Ski
Ski provides AZ with a nicely produced beat that fits well with his rhymes about your world can’t come to a halt just because of all the things happening around you that are designed to bring you down and make you stop. We need more songs like this nowadays that are talking about some different and keeping it real in being able to relate at the same time.

Sugar Hill (Remix)
Produced by L.E.S.
The album ends off with a remixed version of the classic “Sugar Hill” song that was heard earlier in the album. Once again L.E.S. provides the beat on the song as he did on the original, but the beat on this version doesn’t come close to how it was on the classic track. The rhymes by AZ are identical on this version as on the original, but there is an absence of Miss Jones on the chorus. This was a good idea as her singing wouldn’t have really fit well with the beat on this version like it did on the original. The classic original version of “Sugar Hill” had more of an R&B feel to it while this remixed version had more of a Hip-Hop/Rap feel. So in the end AZ gives listeners the best of both worlds as some listeners might prefer one version over the other.

Bottom Line:
AZ displayed on this album why he was to be known as one of the rap game’s premier lyricist and that his featured verse on “Life’s A Bitch” wasn’t a fluke. Much to the likes of Illmatic this album is kept short at 12 tracks total, which leaves the listener craving more at the end and anticipating the next offering (which would be Pieces Of A Man). AZ’s lyrics and choice of topics show that he truly was one of the early pioneers of East Coast Mafioso rap and how albums like Reasonable Doubt that proceeded this album built perfectly off the early foundations laid. With at least 5 classic Hip-Hop tracks provided on this album who could really ask for more. With Doe Or Die, AZ provided the blueprint for many rappers after him to build off of and expand even more. A lot of people nowadays don’t include AZ in their Top 5 emcees in the rap game or even consider him still as a premier lyricist, but I really beg to differ. As he displayed on this album back in 1995, AZ can still rap circles around your favorite emcee and is truly an originator in his own right. The album and AZ have been slept on heavily for too long now as should be recognized as the true Hip-Hop classic that is it. If you consider yourself a true “Hip-Hop Head” and don’t have this in your collection, it’s time to either include it or stop associating yourself with the term.