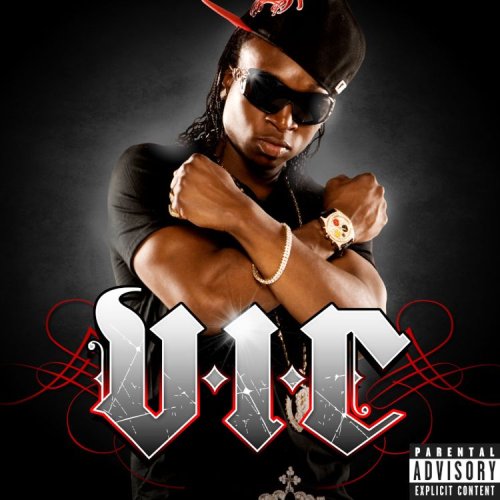 OK, I know I’m a little late on this one, and I was gone for a week or so, but to be honest, I was kind of out of it after that Yung Berg album. I hate to put the blame on someone else and not take responsibility, but sit down and listen to a 10 minute song by Berg and tell me it doesn’t fuck up your week. So I was hesitant to say the least about jumping headfirst into V.I.C.’s album, Beast, but I knew it couldn’t be worse than Berg’s album. Or could it? Let’s see.

Beast
Produced by V.I.C.
I was plesantly surprised here. I mean, in the beginning, all you hear is just a guy breathing in and out really hard like he’s some kind of animal. Then the track comes on and it bangs! V.I.C. actually talks some shit on here too: “Ya’ll can’t win, cause I cannot lose/Like 50 I create more Ja Rules”. Not bad, considering I was expecting a horrible rapper. What made me even more impressed was the fact that V.I.C. produced this himself; the production isn’t too bad on this one, and would actually play this on my MP3. A great start for the album and one of the best tracks.

Bop (Skit)
Produced by V.I.C.
Pretty much some guy continuing with the jungle/animal theme of the album by talking like he’s in a safari, but is actually just observing some guy checking out this girl. “She got all of her teeth, most of her hair”. Damn. Anyway, it doesn’t even really set you up for the next song, but I guess it’s a little funny.

Bop, Bop, Bop
Produced by V.I.C.
This one will set the clubs on fire. When the beat on this came on, I felt like dancing myself. “Now make it Bop, Bop, Bop. Girl drop, drop, drop”. It’s a really infectious hook. He’s really talking more shit, like: “I can’t keep her quiet/And she call me Psychic cause the way my doors flip”. It’s a cool little track, another one I would play on my MP3. If you’ve got a new stereo system in your car, you could use this song to test it for sure.

We Ridin’ (Batman Doors)
Featuring Hurricane Chris; Produced by Mr. Collipark
As soon as I heard the “Nuh-nuh-nuh-nuh-nuh”, I couldn’t believe they were humming the Batman theme song! This song is terrible; V.I.C. just dumbed down to ABC rhymes, I guess for Chris’ sake, and Chris is just as annoying as ever. SKIP!

Flawless
Featuring Avant; Produced by V.I.C.
V.I.C. saved himself on this one: the hook, supplied by Avant, is catchy and the beat goes smooth. I like this track, though I probably wouldn’t play it at all on my MP3; it just isn’t my kind of thing. Still, it’s a likable kind of track.

Get Silly
Produced by Soulja Boy
What can I say about this? Another Soulja Boy track, another absolutely ridiculous dance to go with it. V.I.C. is whatever on this; why choose this as the first single when you have tracks like “Flawless”, “Bop, Bop, Bop”, and “Beast”? I guess it’s an OK track, but it won’t get any play from me.

Jaw Jackin’
Featuring Bun B; Produced by Mr. Hankey
I wasn’t expecting that V.I.C. get big guns like Bun B! V.I.C. is alright on this track, but Bun B is the real star; Bun completely destroys this song and the hook, and I would definitely blast this song. BANGER! Check out for this one!

Beat That
Produced by V.I.C.
This song was hilarious at first, but it’s really downright skippable. Here’s the hook: “I don’t let the pussy beat me, I just BEAT THAT PUSSY!” It’s a sample saying that. It’s funny, but I hate how the beat is constantly switching up. Just SKIP this one.

Wobble (Skit)
Produced by V.I.C.
I have absolutely no idea what this skit is about. But whatever, it’s only 20 seconds long; by the time you go for the Skip button, it’s over.

Wobble
Produced by V.I.C.
The beat is like tribal drums; try rapping over them and the results are horrific. Add to that the track is 5 minutes long, and this one is just bad. SKIP.

Blow My Mind
Produced by V.I.C.
Aw man! Listen to how V.I.C. says “pussy”; he says it even worst than Plies does, which is saying something. The beat on this is smooth as hell, and V.I.C.’s singing on this isn’t that bad; maybe he should quit rapping and start singing? But then he says pussy like 3 times each time the hook comes around, and it’s just weird; he has one of those weird voices like Lil’ Wayne. SKIP, but if your like me, you’ll listen to this song just to laugh at the way he says pussy. “Paw-Sat”

Do You Know
Produced by V.I.C.
This is a pretty good song; it’s about being there for his brother. The rock theme is cool, but it gets kind of annoying after awhile; I wouldn’t bump this one at all because it just gets to be a bit much after awhile. OK song.

By Faith
Produced by V.I.C.
I respect V.I.C. for making a song like this, but it sucks. SKIP

Duck Off (Skit)
Produced by V.I.C.
Another skit about the “primal nature” and the male and the female. BORING…

Duck Off
Produced by Mr. Collipark
The actual song comes on and Mr. Collipark falls flat on his face with a beat like this. V.I.C. does no better. Once again…SKIP.

Wifey Type
Produced by V.I.C.
I almost want to take pity on V.I.C. and tell you NOT to skip this one, but it would be unfair to you. SKIP.

I’m the Shit
Produced by Polow Da Don
It’s a shame what he did to this track; Polow Da Don is a great producer, but V.I.C. completely ruins this track. You should know what to do by now…SKIP!

Get Silly (Collipark Remix)
Featuring Soulja Boy, Polow Da Don, Bun B, E-40, Jermaine Dupri, & Unk; Produced by Soulja Boy
The remix to the song that you’ve heard before. I didn’t really like it cause I hate the original to begin with, but you might like it.

Bottom Line:
There is too many songs on this album: I had to put SKIP on NINE tracks on this album. That has got to be some kind of record or something. The point is, V.I.C., this is your debut album; you don’t have to put 19 track on a debut album. 13, 14, or 15 songs would’ve been just fine. He showed a lot of promise in the beginning, but then the album just took a huge downhill drop. But I digress: the good outweighs the bad. V.I.C. might not be a “Beast” yet, but he can still say that he’s Tarzan, or whatever. I still don’t get the point of that tribal theme that the album conveys, but at the end of the day it doesn’t really matter. Overall, this was a mediocre debut.