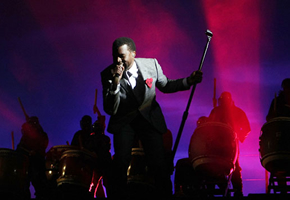 I missed the VMA’s, but apparently I didn’t miss much but a Britney Spears speech, T.I.’s performance with Rihanna, and most importantly, this. Kanye came back to MTV after his outburst where he said he was never coming back; he was understandably pissed off after getting nominated 5 times and not winning once. Well, he came back and won one award, and on top of that closed out the award show with a new song off his new album, which is supposed to come out this year by December! Wasn’t expecting Kanye to drop that quick after Graduation.

Ye’s new album, for now called A Good Ass Job, has a noticeably different sound from Graduation; yeah, that’s a good thing. The beat sounds like Late Registration style Kanye with a hint of that Graduation techno. The song Yeezy performed was called: “Love Lockdown”, and I’m not gonna front, I love it. It’s kind of weird because Kanye never spits one single lyric in it: he sings the song T-Pain style with the Auto-Tune over a beat that sounds like it could be off a Soul Music album, with the heavy bass and piano in the background. The first time I heard it, I was like: “What the Hell is this??”, but after a couple listens, I’m obsessed.

But it doesn’t stop there: it’s been rumored that Roc-A-Fella is setting up a December showdown between Jay-Z’s Blueprint 3 and Kanye’s A Good Ass Job, just like 50 and Kanye did in 2007. While it would be interesting to watch, I’m gonna have to place my bet with Kanye, sadly: I’m a huge Jay-Z fan, second only to B-Easy, and I blasted “Jockin’ Jay-Z” louder than anyone. But Kanye is just more appealing to the younger generation; my generation. People at my school LOVE Kanye almost as much as they love Weezy; and people at my school worship Weezy. Whenever I talk about Jay-Z, they’ll just say he’s alright, not as good as he was. I know they’re right, but I just want to kill them for saying it!

While my bets with Kanye, I think Jay will have the better album, but he’s not going to release a song that would do well commercially like “Love Lockdown”, so Kanye will win, I think. But then again, nowadays it’s all about who’s album leaks first, unless your Lil Wayne. It could go either way, but the most important thing is that whoever wins, Roc Nation will still begin. I can’t wait for that!!

But let’s not stray from the reason we’re here: Kanye’s new single. A CDQ version hasn’t been released yet, so I’m giving you the video of his performance at the VMA’s, decent quality. Enjoy video, and remember you got straight from The Stoop!