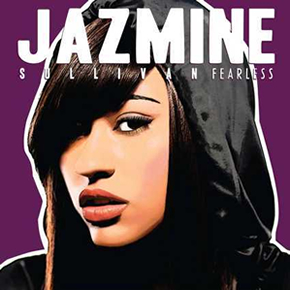 Due to the response last week, R&B is back on the ‘Fro. At its very core, music is all about relationships. How the tempo relates to the sound, how the words relate to the music, how the tone of the voice relates to the chords, and how the artist makes it relate to the end user, you. It seems simple, but as long as the music industry has been around, this reality has been playing Groundhog Day with us all. They get some of the relationship right, but not all. They turn their backs on parts of the relationship and wonder why it doesn’t work out.

Then, when someone does, it resonates in you so strong that you wear the paint off the play button on your favorite device, and find yourself singing chords in silence only to catch yourself grooving to them outwardly as well. With that, let me introduce you to Ms. Jazmine Sullivan, executive producer and sole songwriter of this project.

Her debut album Fearless is currently destroying any chance that I will hear anything else unless it’s material for the Fro for quite a while. We all heard and fell in love with her single, “I Need You Bad”, but what else is there to her?

Her follow up single “Bust Your Windows” may be labeled a “psycho” broad song…but I challenge any guy to say he doesn’t have a lil psycho in him. Right, that’s what I thought. I know that my calm and cool ass has done that house shoes in the rain, or the listen to phone calls thing… DON’T ACT LIKE ITS JUST ME!!!! Ahem…..

Okay, so beyond that, there isn’t a bad song on the album. “Lions, Tigers, and Bears” could have been the title track as well. A song that appeals to the complexities of making that commitment to someone, loving them, and how that seems to be so scared of making that move. Yeah, you that one that just cringed when you read commitment, this song is for you. The song is a lot more eloquent than I can explain away with typing. You definitely need to check it out.

One of the more interesting songs on the album is a tale of domestic abuse from the woman’s point of view. Not “my friend is…” but from the victims point of view. I LOVE this song. She tells you about the mindset of fighting out of the situation and defending herself. I won’t tell you how it goes, but this is some dope storytelling.

The song that I played around 20 times in a row was “In Love With Another Man”. It’ just like it sounds, but she breaks this soulful ballad down so perfectly. It’s quite simple, really. She flipped the role that we have been playing for centuries saying, “Hey, I know I ain’t right / for what I did to you baby / I can’t explain why its him and not you / but at the end of the day, baby I just don’t want to.” She lets him know that hey, he ain’t even as perfect as you, but when I’m with him, that’s all that matters.” Of course that’s HER saying all that, but change the him’s to her…see how familiar that sounds.

Bottom Line: It’s been a REALLY long time since I have been able to just feel an entire album. I don’t mean parts, I mean in it’s entirety. From concept to execution, I would give this album 5 stars if we reviewed it. I think that some songs may slip by folks because the album changes pace and sound a lot, but when you listen to it from front to back, I can’t imagine it without each and every song. You need to go support this. As an album that tells the story of relationships from Alpha to Omega, it relates better than anything I’ve heard in almost 10 years. Tell a friend to tell a friend, press play, and make sure you Turn Yo’ Headphones Up.