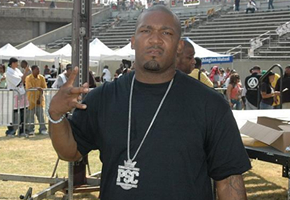 I decided to give you guys something new this week since I haven’t been getting good responses with my “retro” choices. So here, eat this up!

Grinding on and off the streets has finally paid off for Alfamega. After inking a deal with T.I.’s Grand Hustle label, Mega began to assault the mixtape circuit dropping some real hard music. Now he is prepping his first studio album for the Grand Hustle imprint.But enough of the small talk. Some of you guys are familiar with Alfamega, and if you aren’t…what are you waiting on?  This song features three heavyweights from the South; Ross, Bun, and Tip. As Mega puts it, this is the G-Mix, not the remix! Everybody brings the wood to the table on this one, Tip even says he is the best rapper on the mic with a Southern accent. WHOA! I like Ross’ verse the best (who saw that coming?) but it’s like picking the best piece of fruit at the grocery store. If this isn’t enough to get you to listen….then you need to go and hang yourself on a doorknob like DeAngelo. (Barksdale…not the singer!)