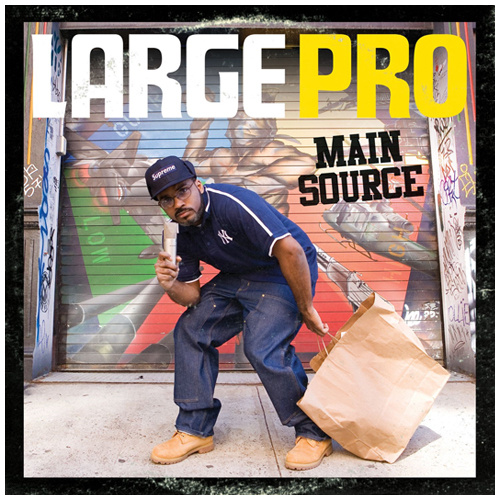 I remember when I was 8 years old walking home from school, and I’d hear Large Professor’s voice booming over a car stereo as I walked by. To this day, I won’t forget that Main Source brought me into Hip-Hop, real Hip-Hop nonetheless. I grew up in Toronto, Canada and probably because of the lack of homegrown cats we had, everyone (and I mean everyone) banged the shit out of Main Source. After Main Source broke up in 94, I was really hoping and waiting on Large Professor’s supposed “solo career”, but it never took off. But then early in 2001, I remember hearing that Large Professor was set to release a shelved album that was supposed to be released in 95′ or 96’… and of course I scooped it up as soon as it came out. And I loved it, it obviously wasn’t as much an album as it was a compilation of remixes and b-sides off vinyl records…but it had the same effect. It brought me back to real Hip-Hop. And then Large Pro released another album just a few months later called The Class. If you can’t tell by now, I’m really biased, and I honestly believe The Class to be one of the best hip-hop albums released in 2002. But then sadly, just as Xtra P had created insane buzz for another album, he fell off the map (as an rapper not a producer) for nearly half a decade. That is until today, when he releases his quote-unquote comeback album…

1. The Entrance
Produced by Large Professor
I forgot to mention that Large Professor is a fucking Nobel-Prize winner in the studio… so you know this whole album will have the hottest instrumentals known to man. The instrumental has heavy sampling of funk and heavy jazz which should set it apart as a great instrumental, but when you add Large Pro’s multisyllabic rhymes in here, you get an unbelievable intro. I could quote something, but he spits fire for two minutes straight.

2. Hot: Sizzling, Scorching, Torching, Blazing
Produced by Large Professor
And this is a bit of a dropoff, the beat is boring and really detaches from the insane lyricism again. The hook is pretty weak too, but since Large P adds a new loop just for the hook it sounds infinitely better. The vibe’s still there though!

3. ‘Maica Living
Featuring Killah Sha & Guardian Leep; Produced by Large Professor
This is more of what I was expecting from this album: gritty, raw production with grimy underground rhymes. Weak hook and the beat is pretty simple, which is to be expected when you’ve got two features on one song, I do like the pow-pow sample though… livens things up a little bit. This is one of those 90’s tracks, which you just nod your head to unconsciously. Watch for Killer Sha’s “killa” verse too.

4. Pump Ya Fist
Produced by Large Professor
Wasn’t feeling this track at all… the beat is too poppy and moves way too fast and that makes it hard to keep up with Mikey D Lotto and Xtra P. This was a delete/skip for me.

5. Party Time
Produced by Large Professor
So Large Pro called a political/social commentary song “Party Time” and he called a fast moving party song “Pump Ya Fist”… this song needs to trade titles with the above song. After I got past that confusion, I found a great song with another simple yet effective instrumental which Xtra P tears to pieces. The hook seems forced as it is not necessary at all on this track. But don’t confuse a weak hook for a weak track… cause this shit bangs.

6. In The Ghetto
Produced by Large Professor
I had to listen to this song a few times before it grew on me. It doesn’t seem very good at first, but once you get past the nearly non-existent beat and almost spoken-word rhymes… you will discover a song that makes you think. Great use of storytelling.

7. Hardcore Hip-Hop
Produced by Marco Polo
Everything I love about Hip-Hop all mixed into one on this track. Add a soulful jazzy beat to 60 bars of straight crack and turn tabling on the hook. One word: fire! Should have called this track “Dragontales”.

8. Frantic Barz
Produced by Large Professor
Really weak… that’s all I can really say. Any time an artist spells bars “Barz”, you can tell your in for a disaster. Trust me and just skip.

9. Sewin’ Love
Produced by Large Professor
Ain’t really feeling this track so much either. It’s not bad, it’s just really boring, in fact I just heard this track and don’t remember a thing about it.

10. RuDopeDapnNoyd Pt. 1
Featuring feat. Jeru Tha Damaja; Produced by Large Professor
Starts off in “Who Shot Ya” style… and ends in Jeru The Damaja spitting a hot 30 second verse. This track was nice, even though it is only a minute long.

11. RuDopeDapnNoyd Pt. 2
Featuring Lil’ Dap; Produced by Large Professor
Another short verse, except this time it’s Big Noyd, who fire breaths all over this track.

14. Rockin Hip-Hop
Produced by Large Professor
I don’t even know what to say about this song. Probably because I’ve already forgotten all about it.

15. Large Pro Says
Produced by Large Professor
Your typical interlude produced by the artist. “Do the bounce like you from down south” ?

16. To The Meadows
Produced by Large Professor
Large Pro starts off by murdering this soft instrumental and then he lets the beat go for a minute. Great song… probably the best display of lyricism on the whole album.

17. The Hardest
Featuring AZ & Styles P; Produced by Large Professor
Wow… I was about to say this album fell off something crazy in the second half but this track takes it back. You could already tell this track was gonna be hot with AZ and Styles P, and they definitely deliver. This track goes hard the whole way, great way to end.