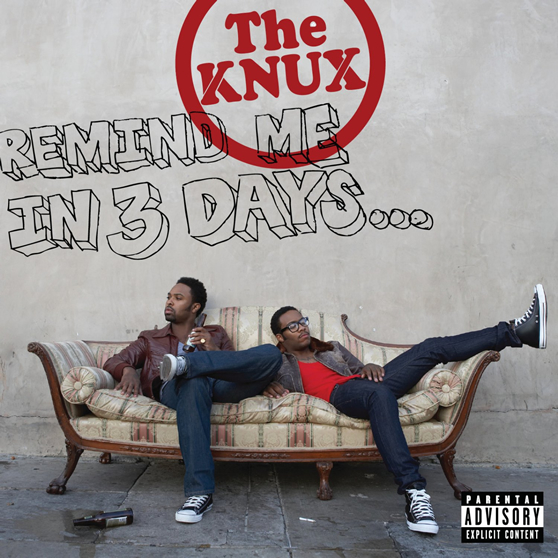 Most people will openly admit that The Knux are a weird group to place in the Hip-Hop landscape. The duo, consisting of blood brothers Krispy Kreme & Rah Almillio, calls their music style “A little rock, a little electric band, heavy fucking Hip-Hop”. When I personally first saw The Knux (As in knuckleheads; get it?) they were in XXL wearing “short-shorts”; so you can see how one could be confused how to take these New Orleans natives (Now based out of Hollywood). But maybe a book shouldn’t be judge for its cover; their first single “Cappuccino” is catchy as hell. Plus, they do play instruments and produce their own tracks (Which in any case shows talent). After thinking of all the labels I could put on this group (“hipster” is one of them), at the end of the day, the music is all that matters. So, let’s check out the music.

1. The List
Produced by The Knux
I can certainly hear the rock influence on this track. But it’s not pulled off a way that sounds contrived (Ex. LL Cool J’s “Baby (Rock Remix)”). The bassline on it as well and the electric guitar heavy hook is done well. The lyrics of The Knux do the job and have abstract traits. This is a nice introduction to listeners.

2. F!RE (Put It In The Air)
Produced by The Knux
No, this is not a weed tribute (I thought it would be too). The laid back beat and sing-a-long hook reminds me of something from the Native Tongues. The good time themed lyrics almost make this summertime soundtrack material.

3. Bang! Bang!
Produced by The Knux
This honestly sounds like it would have been on N.E.R.D.’s last album. There still is rapping in this cautionary tale of gun violence, but I was a little put off by the hook for some reason. I did like the BG Chopper City reference; I almost forgot they were from New Orleans.

4. Cappuccino
Produced by The Knux
Like I said in the beginning, I really like this track. I also understand why this was the first single and probably one main reason the duo got signed to Interscope. The beat here is so catchy; like “Paper Planes” catchy. I could see skateboarders, b-boys, uh, Starbucks employees, all banging this.

5. Roxxanne
Produced by The Knux
I will give it to The Knux, they can switch it up. They go right back to the rock sound here and this time it technically doesn’t contain rapping (It even has a guitar solo). The hook is likable (“Close the door Roxxanne!”), but it was an okay track.

6. Daddy’s Little Girl
Produced by The Knux
This song is dedicated to the spoiled and materialistic young teens you’d probably see on MTV’s Sweet Sixteen. Even though it sounds kinda corny, it’s pulled off well. They even add a girls voice over there voices to help the effect. The track is reminiscent of The Roots’ “Birthday Girl”. Oh yeah, Krispy Kreme say his name before he raps on almost ever song…it can get annoying.

7. The Train
Produced by The Knux
Here, the subject of the song is addiction to “powder” and it’s effects on  life. The Knux continue to deliver on the creativity with this electric heavy track. Not to say that I was totally in love with this track; the chorus could be taken as good or annoying and I probably side with the latter.

8. Shine Again
Produced by The Knux
As soon as the chorus comes on I know it’s a good chance I won’t like this song. I mean, it has a good concept but for some reason it’s just boring to me. I hate to give it a skip…okay maybe a soft skip.

9. Life In A Cage (Electric)
Produced by The Knux
This track sounds a little more intricate and I’m always down for DJ scratches (But I’m not feeling this hook either). I probably should have said this earlier, but Rah Almillio sounds a lot like Outkast’s Big Boi (That’s not a diss; I meant the 90’s, “Billy Ocean” version). All in all, I liked this song. “Stick em! Ha ha ha, stick em!”

11. Powder Room
Produced by The Knux
“I don’t know what’s wrong with you, meet me in the powder room”. The song has a lot of sex themed rhymes with a dash of drug references (Yep; “powder” room). At this point, a lot of the sung choruses are starting to sound the same. The track contains rock elements but sound a little obvious.

12. Parking Lot
Produced by The Knux
I like the feel of this song; the loop seems simple but it gives room for the duo to rhyme and surprisingly shits on their core audiences (“Your boy Rah, skateboard but I don’t write skate raps/And you can take that and shove it up your Bape ass”). It’s reminiscent of something Das EFX or Fu-Schnickens would have rapped on.

13. Hush
Produced by The Knux
What guy doesn’t like a girl making sounds that simulate sex? Well, they use this as a chorus. The whole song is basically The Knux boasting about their sexual prowess. The track has a toned down guitar lick during the verses and comes alive on the hook. I can mess with this one.

14. Wake The Fuck Up
Produced by The Knux
Wouldn’t it be cool if this sampled Larry Fishburne ala School Daze? Well, it doesn’t. This track isn’t bad but it has some noteworthy lines: “I miss Ananda, I miss Aaliyah, and all these Blacks wanna see is that bitch Madea”. It’s still is an average track.

15. Playboys
Produced by The Knux
I actually like the production here but I wasn’t feeling the concept or chorus: “This one is for the plaaaayyyyyboooooyyyyssss/there some money to be made/there some bitches to be laid.” It may be sarcastic, but not really for me.

16. The True
Produced by The Knux
They bring me back with this track. I liked the spacey production and once again Rah Almillio gets his Big Boi on to good results. The song is as good as the title and subject matter; it’s the truth.

17. Lights Camera Action
Produced by The Knux
I guess this is a serviceable ending to the album but I think the last track would have been a better finish. They use voice distortion to describe the glamour and glitz. But I can see why they would end with this seeing as they are now established in Hollywood.

Bottom Line:
The Knux’s debut definitely shows that they possess talent; they effortless use influences from other genres besides Hip-Hop. But they also remind me of those “All-in-one” copy/fax/scanners you get from Best Buy; they do a lot of things but not necessarily well. Remind Me In Three Days has a some strong spots but sometime seems as if The Knux couldn’t decide their course. The album is still a different experience and if you’re in the mood for something different and off the beaten path; this might be for you.