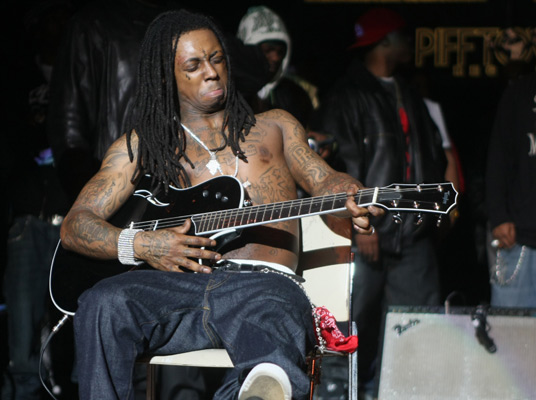 Let’s be clear; You may look at the title of this post and write me off as another mad “Lil’ Wayne hater”, but to be real with you, I’m not mad. And if anything I’m a “Lil’ Wayne realist”. Let’s look at the facts: Lil’ Wayne is a talented rapper. He’s been officially in the Rap game for almost 10 years and he’s only 26. Weezy has worked hard and most of the success he’s received is well deserved. But to say he’s justifies the title of “The Best Rapper Alive”…not so fast. This topic has been discussed a million times in barbershops, message boards, and street corners and to be real with you I heard good arguments from both sides; some intelligent and some not so much. But, it’s simpler than that. Here’s the 10 “Simple” Reasons That Lil’ Wayne Is Not The Greatest Rapper Alive.

1. He’s an Industry Whore
50 Cent said this about Lil’ Wayne probably more out of jealously than anything else; but he might have been on to something. Can you seriously name all the features Weezy was on in the last 2 years? Exactly.

2. He’s a Poser
If you’re a rapper, what’s wrong with being a rapper? Why do you have to carry around a guitar that you can hardly play a few cords on? At least learn how to play the motherfucker.

3. That Verse he did for Mario’s “Crying Out For Me (remix)”
Example: “She said uhh, I said what? She said but I said but? Why you stuck? She said fuck. I said who?”. I still hope Mario didn’t pay for that.

4. The Whole, uh, Homosexual Thing
Do you really think if Biggie was kissing Diddy he would have been called the greatest?  What about Rakim kissing Eric B.? Big Pun kissing Fat Joe? Ewww. If you’re gay, it’s cool. But don’t deny it and make verses like “Damn right, I kiss my daddy…” or take picture like this & this. That’s just as much your fault as his though.

5. Andre 3000 is NOT DEAD
He’s barely raps and is still better than Weezy (And he plays the guitar better).

6. Too Many Drugs
Yeah, it may have worked for Kurt Cobain and Jimmy Hendrix but I sometimes think Lil’ Wayne goes too far. How many times have you heard a wack, half composed Weezy verse or even seen his new piercings/tattoos and said; “Damn, that nigga is getting too high”? Exactly.

7. Too Much Auto-Tune
I’m starting to think Lil’ Wayne has got a vocoder surgically placed in his throat. It’s over with already; let’s move on.

9. That Verse he did for T-Pain’s “Can’t Believe It”
Example: “Now I can put yo ass oooouuuttttt, Oooo keep runnin’ ur moooouuuuuth, and if your brothers come trippin’ Imma show em wat these tear drops abooooooouuutt”. Really? That fucked up the song for me.

10. Ignorant Audience
Okay, this one may not be all Weezy’s fault. I don’t have any problem with recycled rhymes. But when most of you fanbase goes around quoting it like a Lil’ Wayne original it gets sad. If another youngster comes up to me saying something like, “Wayne killed Jay-Z on that last verse on ‘Mr. Carter’!” I think I might lose it.