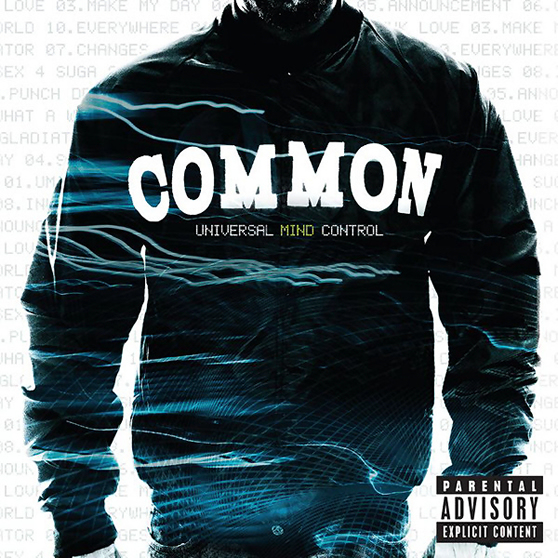 Lucky number 8. Okay, maybe it’s lucky number 7, but how else do you approach an album as anticipated as this one from Common? After the commercial successes of Be and Finding Forever (2 gold albums back to back), 3 movies, and a sag card to his name, the streets was watchin’ for this album. There has been a buzz about this album being different and more club friendly as are most of the releases this year, but what does that mean when you hear it from Common? Let’s get Wright to it fam.

Intro/Universal Mind Control
Featuring Pharrell; Produced by The Neptunes
We all have heard this song, being that it was release back in July in preparation for what was to be an “Invincible Summer” release album. Initially, I wasn’t feeling this song. Maybe time has helped, or maybe I see the light. I dig this song. I don’t usually go for club/dance/techno sounding stuff, but this is a good track.

Punch Drunk Love (The Eye)
Featuring Kanye West & Pharrell; Produced by The Neptunes
You get some of the same tech sensibilities of the previous track, but at about a third of the beats per minute. It’s a slower jam, but that’s a good thing. The track features Common and Ye woppin’ over this syrupy love song that drips with confidence and slick wordplay. “Check my dictionary/that ass is so defined…..I come from Chica so in I Go…” They volley of this track between Common and Ye is dope and I can’t front on it at all. This is my favorite song on the album.

Make My Day
Featuring Cee-Lo; Produced by Mr. DJ
If the Bee Gee’s ever did a rap album, this is the track they would use. I would guess this is the second single based off it’s lighthearted sensibilities. This song is pure evidence that this record should have come out in the summer. I can smell the “bomb pops” (for my midwest folks) all over this jam. It’s not bad, just very very different. The lyrics are just as bubblegum and nowandlater as the track is. The song isn’t a skip, but I probably wouldn’t play it again until July.

Sex 4 Sugar
Produced by The Neptunes
This is ready for the club scene. Forgettable lyrics, check. Techno driven sound, check. Airy chant hook, check. I can’t put into words how much I dislike this song, but the word skip comes to mind. SKIP.

Announcement
Featuring Pharrell; Produced by The Neptunes
The track comes on and is a welcome sound after the previous two songs. Another one of the slower more methodical songs with a groove and more traditional format. This song is by far one of the better 3 on the album. Lyrically, Com again is subdued and I’ve never really been a fan of Pharrell as a rapper but he shows about as well as I’d expect.

Gladiator
Featuring Pharrell; Produced by The Neptunes
I think musically and conceptually, this is the dopest song on the album. We are teased with another whimsical, 60’s sampling hook but this time, it’s paired with a incessant, head banger of a track. Com comes with his typical lyrical assault and a extra serving heat on this one. He spits pure fire at anyone who dares to challenge him. This is that mythical 3rd song that I was speaking of. It doesn’t really fit on this album at all, but the delivery and track are a welcome sound here.

Changes
Featuring Muhsinah & Omoye Assata Lynn; Produced by Mr. DJ
This is another track best suited for a children’s cartoon as it is really light and airy. I really can’t do this track any justice but it sounds like the title suggests, a change. If you don’t hear this song and think you are floating on low clouds and all the animals and flowers are singing this song to you as you pass….man look…this ain’t my kinda song AT ALL. I appreciate the sentiment though. The song is a dedication and expression of Obama being president and the triumph that we should feel about him being elected. So maybe the dreamy aspect is intentional? Well, I’m going to go ahead and say that it is considering that his daughter is on the album, I’m sure that the sound is intentional.

Inhale
Produced by The Neptunes
This is a cool track laid over some scratching and a synth chord that sounds like it’s from some 80’s RnB song. Com does his thing on here with lyrics that are more on par with his previous work. The song features Common Sense speaking about how his flow is his breath and the many manifestations of his breath in life. When you couple lyrics like, “…flowin’ so deep even underwater / I can inhale and put the world in order….gaspin’ for air, air everlastin / raps that are rare, I write with Christ’s / Passion and stair, way to heaven…” and the methodical “inhale” chant that plays as the hook, you start to feel this one by the time it’s over. Unfortunately, he lets the beat play out instead of kicking more lyrics over about the last minute of this song. I think this song would get a lot more critical acclaim but the songs leading up to this one don’t really prepare you to appreciate it, if that makes sense.

What A World
Featuring Chester French; Produced by The Neptunes
The sound on this one is predictable, not that that is a good or bad thing, but it’s evident that Common is committed to this dance/techno/universal sound that he was aiming for. I think the idea to adopt a more old school flow is curious. I can appreciate it just because I know it was a deliberate choice, and a well done one to boot. However, it seems out of place when laid over this track and married to the hook on this song.

Everywhere
Featuring Martina Topley-Bird; Produced by Mr. DJ
Martina has a bit of a following on the trip hop scene and from what I’ve heard, this song is typical of that genre. I like her voice and the celestial sound of it layered on this song. Common doesn’t touch the mic until 1:30 in and he is clearly energized on this one. I think that if his album sounded more like this it would probably be a better album all together.

Bottom Line:
It is very important to note that Common didn’t ask for us to recognize him as a conscious rapper. Not only that, but it is obvious that even as he first hit the scene with his first two Cd’s, lyrically, he was a force to recon with…even while his flow was more frenetic and unpredictable. I deliberately haven’t mentioned Electric Circus up to this point because other sites like to compare this to that album erroneously. The difference between this and EC (one of his best albums) is that EC came off effortlessly and seamlessly. While that album was different, it seemed a lot more natural. Let me clarify that I am not one that says “this just ain’t Common” because I think that Common is one of the more creative artists in the biz and trying to define him is more than a notion…but this album DOESN’T SOUND NATURAL. It doesn’t quite gel for him or anyone else and is painfully mediocre and short. Should you buy it?  Well, that’s your call. I’m a Common fan, and this isn’t hardly my favorite Common release. I’ll probably cop it when it drops because that’s what I do. I have all his albums and usually buy 2 copies on release day, but I feel like he’s earned a pass…and this album isn’t terrible. No, this isn’t the Common from the previous 7 albums and he set out deliberately to make a club album quoting, “….I realized that my own DJ wasn’t playing my music in the club.” To that, all I can say is that I don’t think most of your fans expect/want to hear you in the club. I still consider Common grown man rap, and this grown man doesn’t do clubs. Maybe I’m immune to Universal Mind Control.