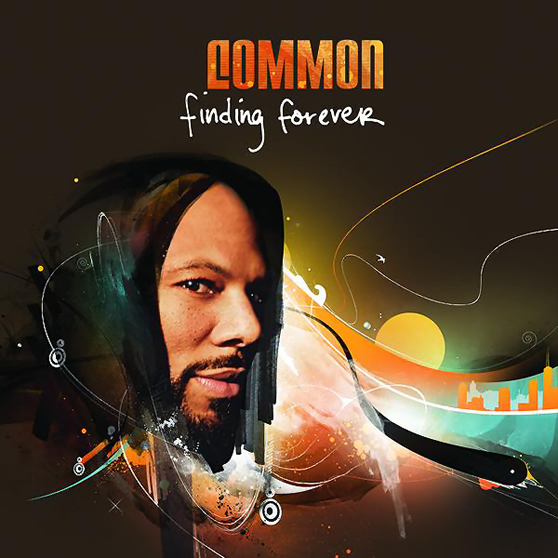 Since his 1992 debut Can I Borrow a Dollar?, Common has always been known to stay true to Hip-Hop. While staying true to Hip-Hop is a good thing, Common hasn’t always been consistent with his direction.During his career and albums, we have seen Common be introspective (One Day It’ll All Make Sense), eclectic (Electric Circus), and be resurrected (BE). It was on BE that Common hooked up with Kanye West and his career got rejuvenated. That album turned out to be Common’s biggest success and one of the best releases in 2005. It seems that Common has once again found direction. Since that release Common has found success as a spokesman and actor, among other things. He returns with his new album Finding Forever and doesn’t tamper with the recipe that worked with BE.

The first track off this album (“Intro”) is an instrumental that is used to bring you into another world. It’s a nice way to get the listener ready for what’s to come. The intro just flows into the first real track, “Start The Show”. Kanye West provides the beat with a chopped up harp/organ/violin blend. Common sounds focused as he schools rappers on stage presence; “Twelve monkeys onstage it’s hard to tell who’s the gorilla, you should have stayed as a drug dealer”. This track was a good way to start the album. Up next is “The People” which features Dwele and is first single for the album. This one has Common riding effortlessly over a sample heavy track by Kanye. The song’s subject matter is inspiring and has Common is his comfort zone. “Driving Me Wild” is up next and features U.K.’s Lily Allen. I’ve heard a lot about Lily Allen but I really haven’t checked her out. I really didn’t see what the hype is all about but I guess since all she did was the hook, I shouldn’t judge based on this. Kanye once again provides production while Common raps insightful about people going crazy about money and what not. The track is catchy and fits the album but I wasn’t completely hooked. Common gets will.i.am behind the boards for “I Want You”. On this track Common talks about the withdraw symptoms from a break up. The song has single written all over it with Common not sounding soft. Check for the break down towards the end of the song. Up next is probably my favorite song on the album, “Southside” featuring Kanye. On this track Chi-town’s finest tag team the beat reminding me of Jay-Z and Biggie on “Brooklyn’s Finest”. The guitar sample heavy track is probably the hardest on the album and pays great homage to Common’s home town. When I first heard the next track, “The Game”, I would have put money down that Premier produced it. Well I was half right; Kanye does a great impression and the Gang Starr DJ provides the scratches on the hook. Common once again sounds focus while evoking great metaphors (“They tried to box me in, like Cassius Clay, hey I’m Muhammad when he fasted”). On Bilal featured “Black Maybe” Common talks about the struggle of being of color. While the song subject matter is great and true, the song can be a bit boring at times and slows the pace of the album. The next song is the J Dilla produced and D’Angelo featured “So Far To Go”. I was surprised to see this song again since it was also on J Dilla’s The Shining. It’s an okay song, I really wasn’t feeling it the first time I heard it, but it kinda fits the album. On “Break My Heart”, Common talks about hooking up with a reluctant girl. I like the song but it seems like it needs more production or something. But then again, sometimes simple gets the point across and Common sounds in place. On the next track “Misunderstood”, Devo Springsteen provides a somber track for Common to weave tails of hard times and sounds like something that would be towards the end of this album. Like Common’s last album, the final track is a long one. Not that this is a bad thing. “Forever Begins” is a good farewell for Finding Forever addressing issues like Dilla’s death. The drums coupled with the church choir like hook sound like a great send off.

Bottom Line:
So far, Finding Forever is the best album released this year. While it has its slow points, it’s basically BE 2.0. It uses the same formula that made last year’s BE a success. In a climate where good rap music is hard to find, Finding Forever is really what we need more of right now.