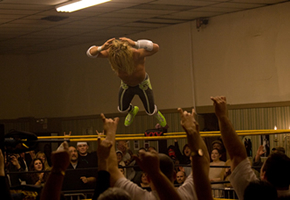 Just because Saul Wright’s previous name was inspired by one of the greatest wrestlers of all time, don’t think he’s the only staff member that knows pro wrestling. I might not be into pro wrestling now but I used to be a big fan: I’ve read The Dynamite Kid’s autobiography Pure Dynamite (as well as Mick Foley’s 1st & 2nd books), I own a copy of the documentary Beyond The Mat, and sadly, I once attended a WWE event (WWF at the time) with a poster board that read; “Shine this sign up, turn it sideways, and stick it up your candy ass!” (Pause). So, if you followed this column at all, you know that my most anticipated film of 2008 was by far Darren Aronofsky’s The Wrestler. Well, I didn’t get to actually see the film until January 1st 2008, but I was impressed none the less. This movie won’t depress you like the last Aronofsky directed film I featured (Requiem For A Dream), but it’s just as gritty. If you don’t have any respect for professional wrestlers and the pain they put their body through for the sake of entertainment; you need to watch this movie. Mickey Rourke (Who this film is said to resurrect) plays Randy “The Ram” Robinson, a professional wrestler from the 1980s, twenty years past his prime, wrestling on the weekends in independent and semi-pro matches for extra money. The movie is shot like a documentary and shows The Ram trying to hold it together by taking a weekend shift at the deli counter at the grocery store where he already works on weekdays, attempts to form a relationship with an aging stripper and does his best to reconcile with his estranged daughter.

So check it out and tell me what you think about one of the best films of 2008 (Shout out to Earnest “The Cat” Miller; dude did his thing!). Oh, and be sure to tell us what was your favorite movie of 2008 in the forums.